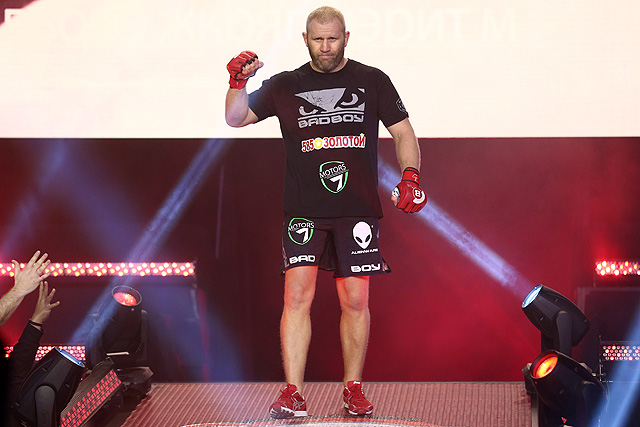 Bellator 215 Results: Mitrione vs. Kharitonov Ends in a No-Contest

On Friday, Feb. 15, Bellator MMA hosted its 215th event from the Mohegan Sun Arena in Uncasville, Conn., for the first of the company’s two shows in a single weekend.

In the night’s main event, heavyweights Sergei Kharitonov and Matt Mitrione collided. The Russian kickboxer Kharitonov is 2-1 with Bellator and had not lost in his last six fights. Mitrione, one of the rare fighters to begin his professional MMA career on the UFC roster, had now made five appearances with Bellator MMA. After wins in his first three promotional outings, including one against Fedor Emelianenko, the NFL veteran was named as one of the participants in the promotion’s heavyweight tourney, but fell short against eventual winner Ryan Bader in the semifinals.

The heavyweight battle topped a card that also featured Bellator prospect Logan Storley and former champ Eduardo Dantas. Storley entered the cage in the co-main event, where he meets veteran Ion Pascu. Dantas was out to snap a two-fight skid earlier in the evening when he locked horns with Toby Misech.

The action kicked off on Bellator.com with the preliminary card at 6:30 p.m. ET. Then it was off to the Paramount Network at 9 p.m. ET for the five-fight main card.