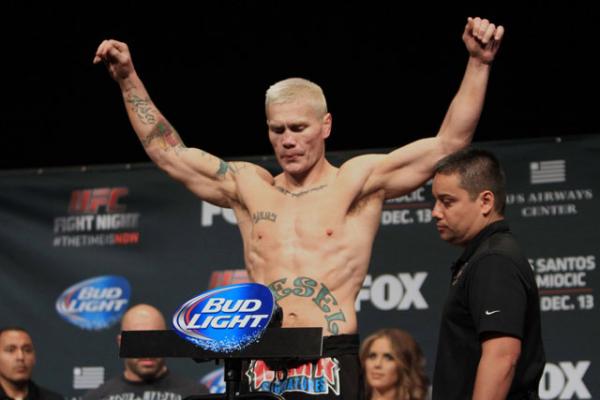 The first few weeks of a new year tend to be quiet for the regional and international scenes. This leaves us with fights like the one at the top of the bill for the 63rd event from KnockOut Promotions. It’s not that Joe Riggs and Dan Yates aren’t worth covering, especially in a bout officiated by former UFC fighter Chris Leben. It’s just that we don’t often opt to cover a contest between a veteran of nearly 70 fights and an opponent who is coming off just two pro fights. Yet, with a rather barren schedule this weekend, these two middleweights form one of the better match-ups available. Just don’t ask us how a commission greenlighted this one.

Riggs will be the familiar face here for fight fans. “Diesel” has a resume a million miles long, but yet he’s still just 36 years old. That seems ridiculous for a man who debuted in 2001, once weighed in at 300 pounds and appeared under the WEC, Strikeforce, Bellator and UFC banners. Well, he’s still at it. Riggs, whose last UFC stint ended in a 1-3 run in 2016, has managed a 7-1-1 mark since his departure from the Octagon. He’s been a globetrotter in recent years, with appearances ranging from KOP to M-1 Challenge. He’s registered wins over fellow UFC vets Cody McKenzie and Shonie Carter in his current run, but he fought to a draw with Boris Polezhay and suffered a loss, albeit by injury, in his most recent appearance against Artem Frolov. Riggs has 27 knockouts and 15 submission finishes, but he’s also been stopped via strikes on nine occasions and submitted six times.

Yates could use this fight as a huge stepping stone to bigger things. Any man who beats someone like Riggs in just his second pro outing will undoubtedly turn heads at the UFC, Bellator and Legacy Fighting Alliance offices. The problem is, Yates doesn’t exactly have the track record of a phenom in the making. Instead, he managed a .500 mark through six amateur outings. As a pro, “Mr. Genuine” took a decision win and then had a fight ruled as a no-contest when he threw illegal strikes to the spine of his opponent. When Yates has emerged with his hand raised as an ammy, it came via submission.

Yates has plenty of issues. He doesn’t appear to be very disciplined in his approach, for one. Not only did he nullify a fight via illegal strikes as a pro, but one of his ammy losses came when he threw illegal strikes against a downed opponent. When Yates is firing on all cylinders and not making mental mistakes, he does have a knack for quick submission finishes. However, it’s a huge jump from Deontae Smith (now 2-7 as an amateur), Deniko Parks (now 1-1 ammy) and Todd Holstege (5-3 ammy) to Riggs, who has shared the cage with the likes of Joe Doerksen, Chris Lytle, Nick Diaz and Louis Taylor in winning efforts.

The only possible wild card that gives Yates a true chance is the recent knee injury Riggs suffered in his fight against Frolov. If Riggs is still hobbled to any degree, he could be an easy target. If healthy, though, then Riggs should be able to give Yates a clinic in MMA. The veteran might not be capable of hanging in the UFC for an extended tenure anymore, but he’s more than capable of handling a virtual rookie with a mediocre amateur history in the sport. Again, how did this even get approved? If Riggs doesn’t ground-and-pound Yates into oblivion, then we’ll be shocked.

Our second selection in a week where only a handful of pro events are even on the slate, the Reality Fighting 102 clash between John Lopez and Johnny Campbell provides us, respectively, with a prospect who has turned his career around and a veteran who needs to do the same following a two-fight skid.

After compiling a 1-1 record as an amateur, Lopez turned pro in 2011 and stumbled immediately out of the gates. “Mr. Nice Guy” suffered a doctor’s stoppage loss in his debut and then tapped out in his sophomore fight. The Underdog MMA disciple finally picked up his first pro win in his third attempt, but he lost again in outing number four. This is when Lopez finally found his rhythm. Between the start of 2014 and early 2017, Lopez reeled off seven straight wins, including five submissions, under the Reality Fighting banner. This was enough to catch the attention of Bellator MMA, which brought Lopez in for two fights. In his Bellator debut, Lopez dropped a flyweight affair to Remo Cardarelli on the scorecards. He rebounded with a decision nod of his own at Bellator 185 against Billy Giovanella. In November, Lopez became the first man to hand formerly undefeated flyweight Josh Ricci a pro loss.

Campbell had a better ammy run, with four victories and no defeats, but he never found the same solid footing as Lopez once he turned pro. “Cupcakes” went just 19 seconds in his pro debut before an accidental groin strike brought the bout to a premature end and a no-contest ruling. He went 5-5 over his next 10 fights before racking up six straight wins, including a knockout of the aforementioned Giovanella. His next four fights were a disaster that included a second career loss to Tateki Matsuda and a submission loss to Fernando Perez, whom Campbell had previously beat via split decision. He broke his four-fight skid with a string of five victories under the Cage Titans banner, but all of these wins came against sub-.500 fighters. Campbell lost his two most recent affairs to fighters with winning records.

Campbell has fed on a steady diet of mediocre and absolutely abysmal opponents. When he does step up to fight better opponents, he frequently comes out on the wrong end of the bout. His first-round submission loss to the aforementioned Perez, a 6-15 fighter at the time who now holds a 7-16 mark, is the epitome of this guy’s career. He’s a scrapper, but not a very good one. He has a balanced spread of knockouts, submissions and decisions, though, and he tends to go the distance in his losing efforts.

Lopez, a natural flyweight, will compete at 130 pounds in this catchweight affair against Campbell, who normally competes as a bantamweight. Size might be Campbell’s only advantage, but it’s not a significant one. Lopez doesn’t have a deep record of victories over prospects and veterans, but it is a more proven run than we’ve seen from Campbell. Lopez might have to settle for a decision win here, but a submission isn’t out of the question.

The theme of the week seems to be mismatches. Whether it’s a skilled veteran against a virtual rookie, a resurgent fighter against a sliding vet, or, in the case of the 48th show from Dynasty Combat Sports, a prospect from a solid camp against a fighter with a losing record, this week is all about clear favorites. The DCS bout in question pairs Team Alpha Male’s Dwight Joseph against sub-.500 fighter Corey Roberts in a bantamweight scrap.

The 29-year-old Joseph qualifies as the one man this week who sports a resume worthy of a true prospect. Joseph, who has spent time training with Disorderly Conduct in addition to Team Alpha Male, went undefeated through eight amateur outings. His ammy run included three submissions and one knockout. He’s only done a tad worse as a pro, where he finally tasted defeat in a split decision against rookie competitor Terrence Almond. The loss came in Joseph’s fourth pro fight. He had debuted more than a year earlier and amassed three wins before the setback. Joseph bounced back from the defeat to score four straight wins, including two first-round finishes. Unfortunately, those quick victories came against opponents with losing records. Joseph took a significant step up in his most recent bout against William Joplin, a veteran of more than 30 fights, but the contest ended early due to lightning at the outdoor event.

Roberts actually clawed his way to an 8-6 record as an amateur. The “Pitbull” hasn’t fared quite as well as a pro. He debuted with a submission loss in 2014. He scored back-to-back wins, but then skidded to losses across his next three fights. He finally added another victory in 2017, but he lost his lone outing of 2018 via disqualification. Roberts tends to live and die by submission.

Honestly, Roberts just isn’t a great fighter. His ammy stretch netted him more wins than losses — barely — but he’s found harder times as a pro. Roberts can find submissions against low-level opponents, but he can’t be expected to easily lock in a hold against a fighter from the Alpha Male camp.

Joseph probably isn’t the next Urijah Faber, T.J. Dillashaw or Chad Mendes, nor anywhere close, but he is a solid prospect who has proven himself through 16 fights spanning the amateur and pro levels. He’s a clear favorite to top Roberts and add to his win column. Joseph isn’t known for his submissions, but he should be able to use his wrestling to keep this feet upright. From there, he can mount an offensive that results in a knockout finish.