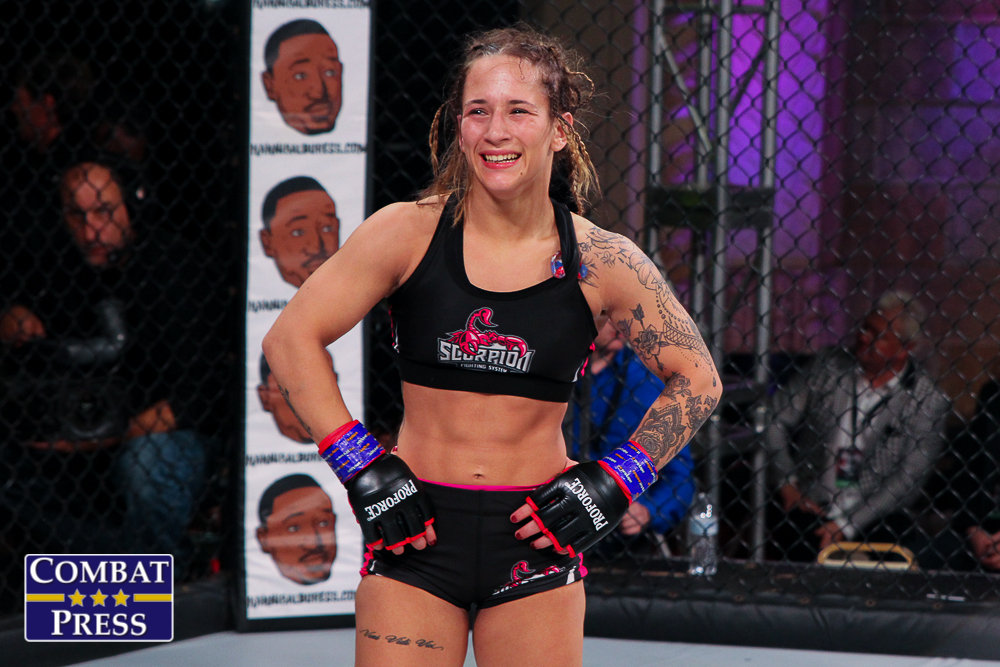 Let’s examine the women’s strawweight division, a weight class that was the second women’s division in the UFC. It’s been thinned out due to the recent addition of the flyweight division, so the UFC needs to look to replenish its talent here.

Making her second straight — and final — appearance in this series, Brazil’s Carnelossi has proven to be a top prospect rearing for her chance to get into the UFC. The 26-year-old has not lost since her MMA debut and has looked very impressive in dominating the Brazilian circuit.

Carnelossi is a tad short at 5-foot-2, but she certainly doesn’t fight that way. She’s very aggressive and loves closing the distance to get on the inside, where she throws very heavy leather. She has powerful striking that can end the fight in an instant. Carnelossi fought in January 2018, when she bested veteran Bianca Sattelmayer. It looked like that would be it for the year, but then she partook in a one-night tournament where she blasted through Aline Pires in just over a minute before winning the tourney with a decision over Joice Mara.

The UFC could sign Carnelossi very soon. Countrywoman Marina Rodriguez just bowed out due to injury for her fight in Brazil against Alexa Grasso, so Carnelossi could easily step in. She’s the best 115-pounder (not named Virna Jandiroba) that the country has to offer right now.

If there is another regional women’s MMA fighter that had a more successful 2018 than Granger, please point her out. The 26-year-old Washingtonian absolutely dominated the scene, going from an unknown fighter with just one bout to the status of a top strawweight prospect. Granger scored four wins in 2018, and all were beyond impressive.

A good sized strawweight at 5-foot-7, Granger is an absolute bully in the cage. She’s an aggressive, suffocating fighter that can throw hands, but prefers to take the contest to the ground. She’s very well versed in submissions and opens up opportunities with ground strikes. Granger is undefeated as both an amateur and pro. After beating the lowly Ivana Coleman, she took out notables Jamie Thorton, The Ultimate Fighter alum Amy Montenegro and Dana White’s Tuesday Night Contender Series vet Jamie Colleen with finishes to complete her perfect 2018.

Strawweight has lost some talent to the newly formed flyweight division, so the UFC needs to do some restocking of its roster. Granger should be a very favorable candidate to assist with this rebuild.

The Combate Americas promotion has done a great job developing Latin American talent. Mexico’s Martinez has been one of the fighters that has benefited the most. The Bonebreaker’s Team member has put her name on the map as an undefeated prospect and a highlight-reel machine.

Though a short strawweight at just 5-foot-2, Martinez fights very effectively against taller opponents. She fights long, especially with her striking, which is the best part of her game. She’s a technical, precise and powerful striker. Martinez is especially effective with her kicks, which have led to three of her five wins. She knocked out Yajaira Romo with a head kick, Gloria Bravo with high and low kicks, and Francis Hernandez with a body kick (and follow-up punches). Her ground game is a little more of a question mark, but anyone who strikes with her risks getting put down.

Martinez’s time with Combate Americas has definitely increased her exposure through a company that the UFC keeps an eye on. The UFC also likes to ink talent from Mexico, a market where the promotion is seeking to increase its presence. That puts Martinez in the catbird seat. If she can continue winning as impressively as she has been, the UFC will no doubt come knocking on her door.

The Czech Republic is slowly starting to churn out talented fighters, so it’s become a place where scouts are turning their attention. One of the fighters leading the charge is the 29-year-old Sormova.

Sormova is an average-sized strawweight. However, she fights bigger than her 5-foot-5 frame, especially on the mat, where she does her best work. All of her fights have ended in a finish, including four submissions. Her go-to move looks to be the armbar. She defeated UFC veteran Cristina Stanciu in 2017. She fought just once in 2018, tapping out Ukrainian prospect Svetlana Gotsyk in the first round. That win should be more than enough to get her a look from the UFC.

The UFC will be in Sormova’s homeland in the first quarter of 2019, so she’s an obvious signing for that card. She will not only give the card local flavor, but a skilled fighter with the chops to compete in the UFC strawweight division. The UFC loves finishers, and Sormova definitely fits the bill.

Although she’s an atomweight — and not even a large one — Zappitella is an outstanding prospect worth a look from the UFC. The 4-foot-11 (yes, you read that right) spark plug may be tiny in stature, but she fights big. Zappitella is accustomed to fighting opponents who are clearly larger than her. She’s very comfortable doing so, too, and she could continue this trend in the UFC’s strawweight division.

Zappitella is a former collegiate wrestler from King College who has experience trying out for the Olympic team. The 23-year-old uses her wrestling with great success in the cage. Wrestling may be the most important background for women in MMA, because there are not a lot of women wrestlers. The ones the sport does have are highly successful, from Carla Esparza to Tatiana Suarez.

Zappitella went 3-0 in 2018, scoring huge wins over Kyna Sisson, Jillian DeCoursey and Amber Brown. She may be the top contender for the Invicta atomweight championship right now. Her size may hold her back a bit in a move up to 115 pounds, but it should not matter all that much. She’s not much shorter than Danielle Taylor, who found some success in the UFC strawweight division. Given her skill set and age, in unison with her constant improvements, Zappitella could be a real threat to any strawweight in the UFC.