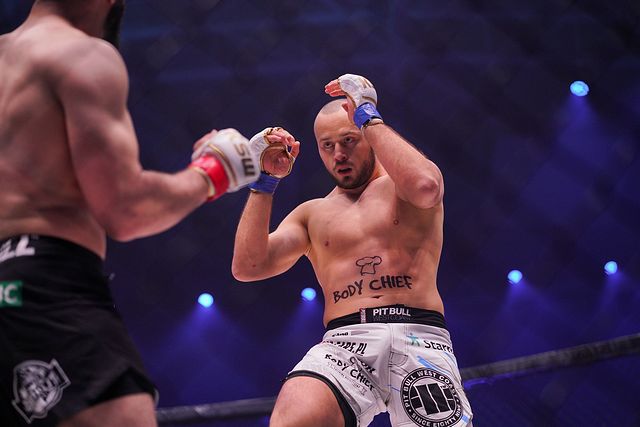 Five Light Heavyweight Prospects the UFC Should Sign in 2019

Let’s look at the light heavyweight division. The weight class has added new talent at the UFC level, but it never hurts to add even more talent to the roster.

A guy who has been in consideration for this list for several years now, Albrektsson makes his first showing and is still just 25 years old. The Swedish prospect is an exciting guy with experience in the big leagues after having competed multiple times for Japan’s Rizin Fighting Federation.

He’s well rounded and athletic, and he has experience outside of MMA in both sanshou and Brazilian Jiu-Jitsu. He holds notable wins over current Bellator star Vadim Nemkov, as well as UFC veteran Josh Stansbury in his most recent bout. He was 2-0 in 2018, re-establishing himself as a top prospect after finishing 2017 with a loss courtesy of two-time list veteran Jiří Procházka.

The UFC often travels to Europe and seeks solid local talent to throw on these cards. The light heavyweight division is in constant need of young blood and talent. Albrektsson could have a good tenure with the company. He’d definitely be an exciting fighter, which is something the company craves.

Dolidze is a last-minute addition to the list, stealing a spot from Michal Bobrowski. Dolidze has punched his way into top-prospect status. The 30-year-old slugger represents the type of finisher that makes highlight reels, while bringing an aura of intimidation to anybody who dares stand across from him.

A ferocious striker, Dolidze has the type of one-punch power that all fighters desire. He likes using techniques that are tough to use, except he can land them. This was seen in his last fight against Michal Pasternak, where he absolutely throttled his Polish opponent with a spinning backfist. Don’t think he’s incompetent on the ground, either. His first two wins as a pro came in under a minute via heel hook submission.

It seems that the Caucasus region (outside Chechnya and Dagestan) is really developing nicely into a hotbed for MMA talent. Dolidze looks to be one of the guys leading the charge. There are some very interesting match-ups available for him in the UFC.

The only non-European/Asian fighter among the light heavyweights, Farias, surprisingly, has not already been signed by the UFC. He’s a 25-year-old with top-level skills. Farias could move up to heavyweight if Needed, too. He has already competed 16 times as a professional and works with one of the best Brazilian gyms around right now in Evolução Thai MMA.

Farias is a dynamo on the ground, where he owns 10 victories by way of submission. He also has the ground striking to complement his submission skills, and this helps to open up those submission opportunities. His striking on the feet could use some work, but this is why he runs with Evolução Thai MMA. His only two losses have come by knockout, with the latest happening in 2016. He’s currently on a six-fight winning streak.

Farias has fought all over the world. Even if the UFC can’t find A spot for him on a Brazilian card, it could put him anywhere. He’s still a young gun that could serve as either a heavyweight or light heavyweight, which should make him even more attractive to the UFC as the company tries to load up both divisions.

As the champion of a top MMA organization, not only will you get noticed, but you’ll get paid. KSW is a top regional organization out of Poland, and from the sounds of things, the company pays extremely well. That’s why it may be hard for the UFC to entice Narkun over to the world’s largest MMA promotion, but he’d definitely be worth it.

There aren’t many fighters who had a better year outside of the UFC and Bellator than Narkun has had in 2018. The large light heavyweight scored back-to-back wins over Mamed Khalidov, who has long been considered the best non-UFC/Bellator fighter in the world. This includes a triangle choke for the victory in their first encounter. That win really pushed Narkun to the forefront. He is a well-rounded individual and has had a tough schedule up to this point. Narkun is a proven commodity who would do big things in the UFC.

It will be very tough for the UFC to lure Narkun away from KSW, but it would be a huge signing for the promotion. Since he’s already been on this list before, this is the last time you will see him here.

Has the UFC ever had a fighter from the country of Turkmenistan on the roster? We’re pretty sure it hasn’t. That should certainly change with Yagshimuradov, a 29-year-old who has achieved championship status with the Absolute Championship Berkut organization.

Yagshimuradov, who hasn’t tasted defeat since 2015, is a finisher who can put you out with one shot on the feet or submit you with ease on the ground. He prefers to bang on the feet, as evidenced in recent striking finishes over Luis Miranda, UFC vet Joachim Christensen and Dan Konecke. His most recent victory over Batraz Agnaev, who made it onto this list last year, earned him gold.

Yagshimuradov would more than hold his own on the UFC roster. He likely has to fight out his Absolute Fighting Akhmat contract, but then the UFC needs to come knocking.