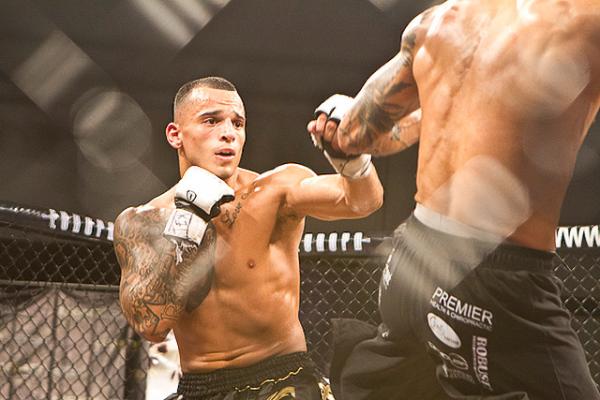 Imagine the following scenario. You work your ass off every day at your profession. You go in and crush it day in and day out. You miss family time and time with friends. You put your body through hell. You make all these sacrifices for the greater good. You just want to be the best at what you do. You show up for the final presentation and put your heart on the line. After the final bell rings, it turns out you failed, all because three strangers decided somebody else did a better job. The moral of the story is that you never want to let someone else decide your fate. Never leave it to the judges.

Ray “The Judge” Rodriguez does not have a J.D. He has no experience practicing law and has never been the judge of anybody’s performance. It all started across the pond.

“I started fighting when I was in the military,” Rodriguez told Combat Press. “I was stationed overseas in Europe, and I found a little gym in Belgium that I started training at. I had my first competition within the first two months. That competition was a European amateur tournament. After that, I was a Combatives instructor for three years at Fort Hood, and I was also on the All-Army Combatives team. I got out and went on to pursue my career full-time. I’ve been a professional fighter ever since.”

The moniker Rodriguez carries is quite fitting. In his 13-4 pro career, he has finished eight opponents. He decides his own fate, in other words. However, “The Judge” picked up his nickname before he even stepped in the cage as a pro.

“When I first started fighting in Europe, I was finishing all my fights in the first round,” Rodriguez explained. “When I got back to Fort Hood, I was training at a gym here in Texas, and they were asking me about my past and my career. I told them I finished a lot of good opponents in the first round, and I never let the fight go to the judges. They said, ‘You’re the judge of where the fight goes,’ and it just stuck, man. I started playing with it on social media, and my family loved it, so I just made it my fight name. It’s better than ‘Pitbull’ or something everyone has. It’s unique.”

The nickname is not the only unique quality for Rodriguez. When people think of the average Army Combatives guy, they likely assume they are infantry or Special Forces. It’s easy to forget that the military has other needs outside of just ground fighters, and there were likely a lot of personnel that really appreciated his services.

“I was a dental assistant, and I went to Iraq in 2009,” said the native Texan. “Then, when I came back, there was a Fort Hood Combatives tournament, and I just missed it. But I talked to the guys who ran it, since I had just missed it by a week, and I asked them if there was anything I could do to be on the Combatives team. So, I had a small competition between me and my friend, and I ended up beating him, and they put me on the team. So, we trained for about three months for the All-Army Combatives tournament, and we won that tournament as a team. The higher-ups kept me around as an instructor, so we trained soldiers how to defend themselves if they were in Iraq or Afghanistan and were in that hand-to-hand situation.”

Three years as a dental assistant, and three years as an Army Combatives instructor. That’s not your typical military career, but Rodriguez made the most of it. After leaving the military, he and business partner Travis Windhorst opened Ultimate Submission Academy in San Antonio. Now, in addition to his own training, he is able to teach others his craft, while also providing for his wife and three kids.

“I feel like being a gym owner and a pro fighter really work synergistically,” Rodriguez said. “If I’m not training or fighting, I’m helping others train and get ready for competition.”

Rodriguez is currently on an impressive winning streak dating back to April 2015. However, his pro record is very much a tale of two careers. He went from a 5-4 start to his curent 8-0 stretch, and it had a lot to do with the way he was managing his life.

“I actually just refocused my attention, which sounds counterintuitive,” Rodriguez said. “When I was 5-4, I was giving everything I had to the sport of MMA, and I wasn’t focusing on my studies. I wasn’t really having as much fun at the time as I should have. After I had two losses in a row, I announced in the cage that I was retired and I couldn’t do it anymore.

“It was a very brief retirement — maybe two or three months — and I got back in the mix. I told myself and my family that if I was going to do this, I was going to do it right. I allotted time to focus on my studies — I recently got my Bachelor’s degree from the University of the Incarnate Word — and I had to make family time as well. When I was able to focus on other things in my life, I went on an eight-fight winning streak.”

Rodriguez’s degree came in the field of kinesiology, which is very fitting, considering he owns a gym. When he’s not at work, he’s hanging out with his kids. He and his wife, Monica, have two daughters, ages 16 and 6, and a young son who is one year old.

“I’m a big family man,” Rodriguez explained. “If I’m not training or at the gym, I’m here at the house watching Bubble Guppies or Sofia the First or something like that. I’m always with the family.”

On Friday night, Rodriguez will be back in the cage for his 18th pro fight. He faces Chris Gutierrez in the headlining bout of Legacy Fighting Alliance 52 at the Bell County Expo Center in Belton, Texas. Gutierrez, who is 11-2-1 as a pro, is currently on a two-fight winning streak and has never been stopped.

“He’s a decent striker,” Rodriguez admitted. “He throws a lot of kicks and spinning attacks, and he uses a lot of unorthodox techniques, like spinning back kicks, axe kicks and things like that. It’s something we are more than ready for, and I’m excited to see how everything turns out. Once he feels the pressure we’re going to put on him with our striking capabilities, he’s going to freak out under the pressure.”

Rodriguez is a man on a mission, and that mission is to do right by his family and lead by example. On Friday night, live on AXS TV at LFA 52, he will get the chance to show them once again that hard work pays off.

“Man, every time I step into that cage, I put my heart on the line,” Rodriguez said. “I don’t like boring fights, you know? All of my fights have been exciting, fan-friendly fights. I think that’s the way the sport should be. I do this for my family. The reason I train is, I want my kids to know anything is possible as long as you work your ass off and don’t take any shortcuts, you know? Making it to the UFC would be a great trophy and also something where they can say, ‘My dad made it to the UFC.’ They can do anything they want — be the President of the United States, a doctor, a lawyer, even an MMA fighter. I want to be able to say I did it, and so can you.”