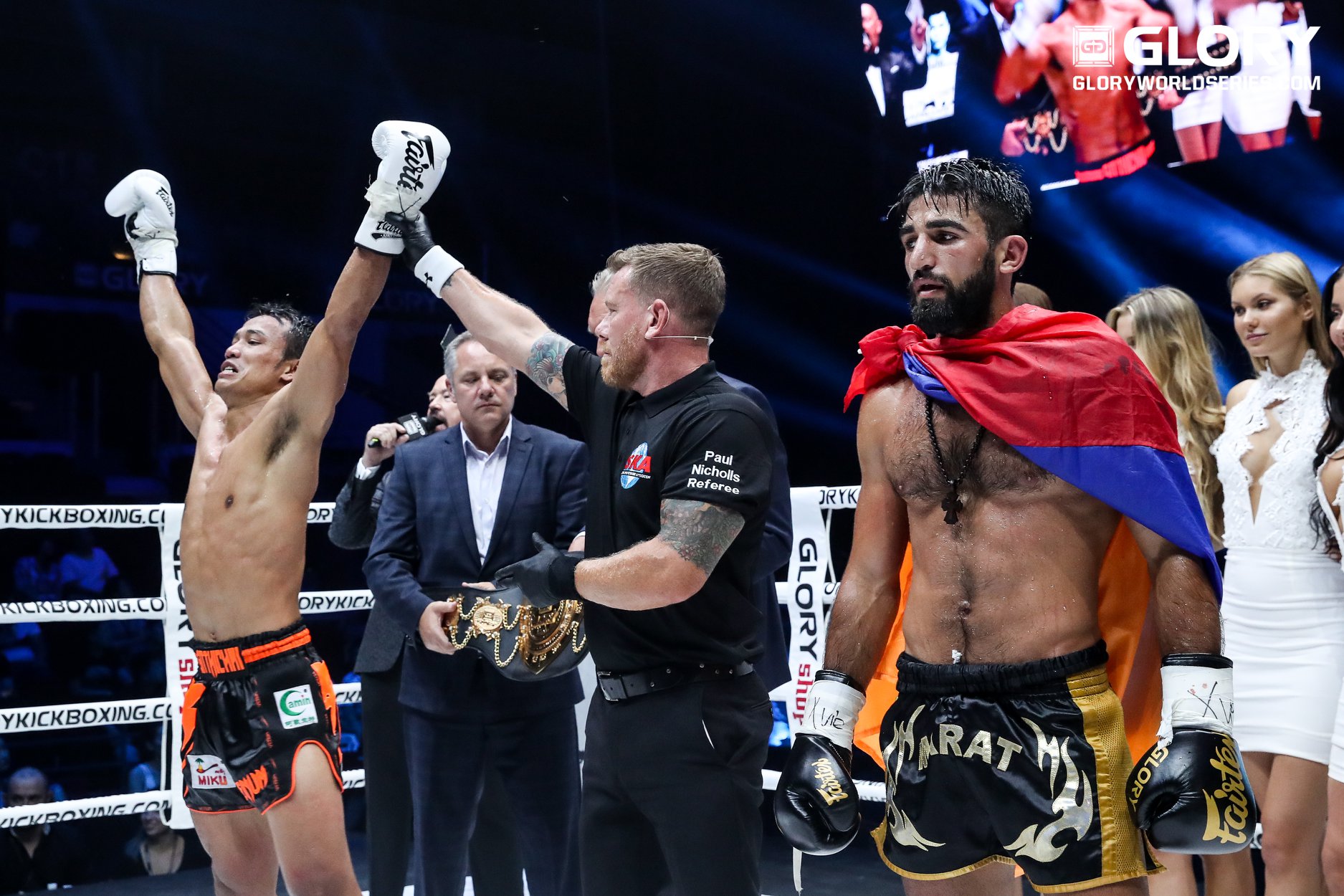 The heavyweight divison was largely quiet in the month of August. The lone fighter to make the walk to the ring was No. 7-ranked Zabit Samedov, who was victorious over Brice Guidon at Akhmat Kickboxing. The unanimous decision moved Samedov’s winning streak to 12 straight.

Dropped from the rankings: Stéphane Susperregui (10)

The No.1-ranked light heavyweight Artem Vakhitov defended his GLORY world title in a closely contested championship bout with familiar foe Danyo Ilunga at GLORY 56. Vakhitov edged the challenger on the judge’s scorecards to remain atop the rankings. France’s Stéphane Susperregui dropped out of the rankings because he fought in a one-night, four-man 105-kilogram tournament. Susperregui knocked off his semifinal opponent Vladimir Toktasynov before losing in the finals against Arnold Oborotov. Despite the loss to Vakhitov, Danyo Ilunga slides into the top 10, as he was the next highest ranked competitor outside of the top 10.

The middleweight division’s only fight featured two of the top five in a long-heated rivalry between former GLORY champions Simon Marcus and Jason Wilnis. In their fourth meeting at GLORY 56: Denver, Marcus was able to land with more volume to take home the split-decision victory over Wilnis. Marcus is now scheduled to face current titleholder Alex Pereira at GLORY 58 in September, the man who took his belt from him last year.

The month of August featured a number of competitors competing for position at the bottom of the welterweight rankings. France’s Yohan Lidon continued his three-fight winning streak with his biggest win in years. He bested former GLORY title challenger Yoann Kongolo for the WKN 79.4-kilogram title at Fight Night Saint-Tropez. The only other welterweight in action, Alexander Stetsurenko, moved into the ninth spot with a decision victory over Pavel Provashinskiy at ACB Kickboxing 17.

In a clash of the top-ranked lightweights, GLORY lightweight titleholder Sitthichai Sitsongpeenong earned a hard-fought decision victory over Marat Grigorian in the main event of GLORY 57: Shenzhen. The victory marks the fourth time Sitthichai has topped Grigorian. The Thai fighter pushed his number of title defenses to five, scored his ninth win in a row, and knocked off his next closest competitor, both in the pound-for-pound and lightweight rankings. The only other lightweight to compete this month was current Enfusion 70-kilogram champion Jonay Risco, who earned his place in the Kunlun Fight 70-kilogram tournament final 16 with a decision victory over China’s Li Shiyuan at Kunlun Fight 75.

The month of August featured two members of the featherweight division competing against unranked opposition. No. 3-ranked Masaaki Noiri made quick work of his Chinese opponent Yang Haodong with a dominant performance that led to a first-round knockout at Krush 92. Following the bout, Noiri vacated his K-1 super welterweight title to challenge himself in the K-1 middleweight division (67.5 kilograms). The other fighter in action in August was former GLORY featherweight champion Serhii Adamchuk, who dispatched of Anvar Boynazarov by decision at GLORY 56 to earn his third consecutive victory.

There were no ranked fighters in action this month, so the rankings remain unchanged.

The world’s top-ranked kickboxer, Sitthichai Sitsongpeenong, continued his reign of dominance with his championship victory over No. 3-ranked Marat Grigorian. With the loss, Grigorian drops to the fourth spot, paving the way for top welterweight Artur Kyshenko to move up to third. Artem Vakhitov held onto his spot in the rankings with a slim victory over Danyo Ilunga.

Droppped from the rankings: Antonina Shevchenko (9)

The month of August wasn’t particularly busy, but it was most certainly controversial. Top-ranked female kickboxer Anissa Meksen lost her GLORY super bantamweight title in her 100th bout when two of the three judges from the Colorado Combative Sports Commission inexplicably gave the decision to the challenger, Jady Menezes. Despite losing, Meksen remains atop the rankings due to her resume, which features 96 wins and only four loses, her prior win over Menezes, and the nature of the decision, which is one of, if not the worst, decision in GLORY history. With the questionable victory, Menezes slots into the 10th spot in the rankings. The only other fighter in action was Krush women’s champion KANA, who overwhelmed Liu Shibai for the second-round knockout at Krush 92. Previously ninth-ranked Antonina Shevchenko falls out of the top 10 due to her signing with the UFC to compete in MMA.