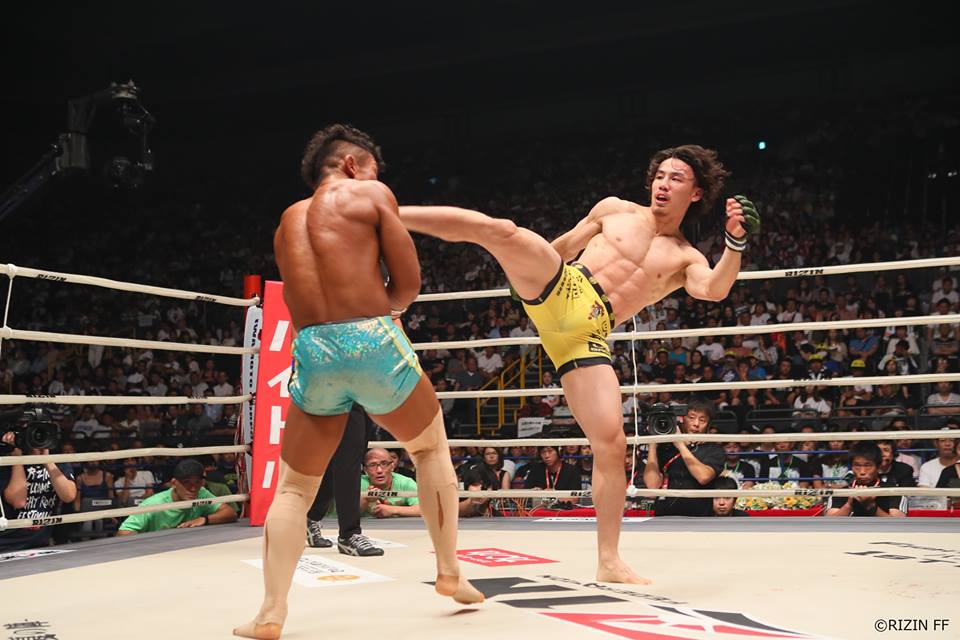 The Rizin Fighting Federation travels to the Aichi Prefectural Gymnasium in Nagoya, Japan, for the first time on Sunday, Aug. 12, for Rizin 12.

The main event of the evening features the consensus No. 1 lightweight in Rizin, Yusuke Yachi, taking on late-replacement opponent Luiz Gustavo. Yachi rides a six-fight winning streak into the ring following wins against UFC veterans Diego Nunes, Takanori Gomi and Daron Cruickshank. Following the injury to Yachi’s original opponent Bruno Carvalho, the undefeated Gustavo was brought in with a lengthy winning streak of his own into his promotional debut. Gustavo has stoppages in all eight of his professional wins.

Japan’s best hope at lightweight, Yusuke Yachi, makes his return against late-replacement opponent Luiz Gustavo. Can the Brazilian end Yachi’s dominant run in the promotion, or does Yachi continue to build the anticipation for Rizin’s future?

Ever since Yachi debuted in Shooto in 2009, he has been heralded as a top prospect from the Krazy Bee gym. He lived up to the hype by winning the Shooto Pacific Rim lightweight title in 2012 and capturing the PXC featherweight crown with an absolute drumming of Jang Yong Kim in 2015. He carries a six-fight winning streak into his first Rizin headliner. All of the eyes are on Yachi, the consensus pick to take over the reins as the top lightweight fighter in Japan. He hammered that notion home with stoppage victories over Daron Cruickshank, Satoru Kitaoka and Takanori Gomi. Yachi faced former UFC fighter Diego Nunes in his last bout at Rizin 10, where Yachi was victorious and showed growth in his game.

“Killer” Gustavo brings an unbeaten record into the biggest opportunity of his career. The 22-year-old is hoping to foil Yachi’s plans for divisional dominance with his aggressive, fight-finishing style that has produced eight career stoppages, including five first-round wins. The Brazilian is an absolutely wild striker who loves to throw jumping knees, massive hooks and highlight-reel attacks. He has a very solid ground game as well. If Rizin was looking for an exciting replacement that would bring the fight to Yachi, the organization found him. If Gustavo can play spoiler remains to be seen, but his style is something that will certainly appease the fans.

This pivotal contest will be key for Rizin’s outlook in the next few years. Rizin boss Nobuyuki Sakakibara wasn’t happy with the TV numbers from the company’s last event, which featured stars Rena Kubota, Kanna Asakura and Kyoji Horiguchi. Sakakibara hinted the end of this year as a definitive year in the company’s history. As with most combat-sports startups, the third and fourth years are usually the make-or-break years to determine if a company can sustain its costs by bringing in profitable gains. Throughout MMA history, this is especially known in the rise and fall of Pride, K-1, World Victory Road and others. Rizin needs to create new stars to re-invigorate the Japanese market, or we might not be talking about the promotion for much longer.

There are five kickboxing fights on the card with all but one of the 10 fighters making their Rizin debut. Which fighters and fights should the fans pay attention to?

Former Shoot Boxing super bantamweight champion Taiki Naito, 22, makes his promotional debut to much acclaim. The excitement around his career comes both from his resume in Shoot Boxing and his 2015 match-up with Japanese superstar Tenshin Nasukawa in the finals of the Blade 55-kilogram, eight-man, one-night tournament. Since falling short to Nasukawa, Naito has built his own stellar resume of victories in Shoot Boxing over the likes of Yukinori Ogasawara, Keisuke Miyamoto and Seiki Ueyama. During his Rise Dead or Alive 57-kilogram tournament run, he beat three fighters in one night to push his current winning streak to four. If Naito dispatches of fellow Rizin debutant Hannya Hashimoto, then he could be featured in Rizin’s upcoming kickboxing tournament that also includes the aforementioned Nasukawa.

The 24-year-old Hashimoto is tasked with potentially playing spoiler against Naito. The former Gladiator Kick featherweight champion started competing in combat sports when he was just 12 years old. He is willing to compete in mixed-rules combat, including a 2017 fight against Shota Hara in the Ganryujima “moat fighting” realm and a lethwei-rules bout in June against Sojun Katsura. Hashimoto is an aggressive striker who has scored knockouts throughout his career. However, that won’t be enough against Naito.

The lone fighter making his return to Rizin is Shoot Boxing star Kaito “KAITO” Ono, who is coming off a picture-perfect knee for a knockout against Yoshiya Uzatsuyo at Rizin 11 just two weeks ago. The 20-year-old made quick work of his overmatched opponent for his seventh consecutive win and 15th in his past 16 fights. The Shoot Boxing super lightweight champion has been a highly touted prospect since he was a middle-schooler, even defeating current top-10 featherweight Ren Hiramoto as a 13-year-old. KAITO is an athletic fighter with excellent boxing, lightning-quick counter striking, superior kicks and instinctual finishing ability.

The Shoot Boxing mainstay welcomes WBC Japan Muay Thai lightweight champ Sho Ogawa, who collected another title with a solid performance over Japan super lightweight titleholder Shohei Asahara at Hoost Cup Kings Nagoya 4 in May. The 25-year-old Oishi Gym product came up in the K-1 and Krush youth system. Ogawa has a solid Muay Thai base, stable defense with a high guard, a sneaky left hook and a relentless stream of low kicks and body kicks. Ogawa doesn’t fight at an extreme pace, but he does stalk his opponents to open up his offensive attack.

Naoya, 23, knocked down then four-time defending champion TARO three times in the third round to capture the West Japan featherweight title at TK Promotion Border-Kickboxing in March. He went on to win the WMC I-1 58-kilogram title in China the next month. However, Naoya is coming off a devastating knockout loss against 18-year-old Hiroki Kasahara at Shoot Boxing 2018 Act. 3.

Naoya makes his Rizin debut against undefeated prospect Ryuki, who won amateur kickboxing titles in K-3 and J-Network. The 22-year-old has won 16 of his 18 professional bouts. However, his experience came from his time as a youth. He started his journey at the age of six and has fought more than 130 times in his amateur career.

Shintaro Matsukura was one of the fighters who left the K-1 stable as a result of the Try Hard Gym split. The 2009 K-1 Koshien 70-kilogram champion was a constant feature on Krush and K-1 cards over the last few years. The 26-year-old Miami native came up short against Lee Seong Hyun in his most recent fight at Rise 125 in June. He takes on Takahiro Okuyama, 24, who competes out of Nagoya. The Shoot Boxing fighter brings a five-fight winning streak into his promotional debut.

Former Krush super bantamweight champion Takiya Shota takes on Syuto Sato. Shota, 29, is also a K-2 grand prix lightweight champion. The experienced veteran has over 26 wins in his professional career, but he is coming off back-to-back losses in Rise. His opponent is the younger brother of former Deep strawweight champion Kanta “Kang” Sato. The former WMC I-1 54 and 51-kilogram champ makes his promotional debut after losing his past five fights.

The presence of Japanese prospects on the card is apparent, with names like Yuki Motoya, Kanako Murata, Reina Miura and Mikuru Asakura. Can these prospects continue their rise at the event?

Despite losing to Kyoji Horiguchi last year, Motoya is still largely considered one of the best flyweights in Japan. The 28-year-old veteran has won 20 of his 26 pro bouts. He picked up stoppage victories in 12 of those contests. Motoya was defeated in his Rizin debut, but his opponent, Felipe Efrain, missed weight, so the bout was ruled a no-contest. Motoya was victorious in 12 of his other 13 recent bouts, with his lone loss coming against the aforementioned Horiguchi. Motoya’s resume features wins over former champions Yoshiro Maeda, Masakazu Imanari, Tatsumitsu Wada and Matt Manzanares, as well as top names like Je Hoon Moon, Sota Kojima and Allan Nascimento.

Motoya takes on underrated Japanese bantamweight Kazume Sone. The Shooto Pacific Rim bantamweight titleholder has won three straight. Sone has consistently competed against larger competition than Motoya throughout his career in Heat, Vale Tudo Japan, Tenkaichi and Shooto. The 30-year-old has stopped his opponent in 13 of his 23 professional wins, but he still enters this bout as a big underdog.

Asakura has one of the biggest opportunities in his young career when he faces former UFC fighter Hatsu Hioki. Asakura, 25, has won 13 of his 16 bouts, with stoppages in 11 of those victories. The Outsider mainstay is the older brother of fellow exciting prospect Kai Asakura, who is a fight-finisher in his own right. Asakura gets a chance to unseat one of the best Japanese fighters in the past decade.

Hioki, a former TKO, Sengoku and Shooto champion, has one of the best resumes of any featherweight in Japanese MMA history. He holds victories over seven UFC veterans, including Masanori Kanehara, Mark Hominick, Jeff Curran, Ivan Menjivar and George Roop. He has also been victorious against Bellator fighters Marlon Sandro, Ronnie Mann and Chris Manuel. Hioki has lost back-to-back fights by way of knockout against Hiroshige Tanaka and Hiroyuki Takaya. Asakura will certainly be looking to add to Hioki’s losing skid.

Murata is a high-level freestyle wrestler who has won gold at the international level in junior competition. She’s turned in an impressive MMA career, which includes victories over stiff competition like Kyra Batara, Ilona Wijmans, Lanchana Green and Maia Kahaunaele-Stevenson. Magana makes her Rizin debut after suffering losses to the likes of Tecia Torres, Michelle Waterson and Jessica Eye. This bout has the feeling of a showcase bout for Murata, who is the far superior grappler.

Miura, 22, is looking for her 10th career win. She is an experienced grappler who has taken on tough challenges against large opposition since making her debut in Rizin against pro wrestler Jazzy Gabert in 2017. Her character aside, Miura has stopped six of her nine victories, with five wins coming by way of submission. Her opponent, the aforementioned Young, makes her return to MMA for the first time in nearly four years. The Invicta FC matchmaker brings a four-fight skid into the bout. While retired from MMA, she’s been active in other forms of combat, including kickboxing and Muay Thai, where she’s picked up wins in 11 of her past 12 outings. This fight is a true striker-vs.-grappler match-up where the outcome will solely depend on where the fight takes place.