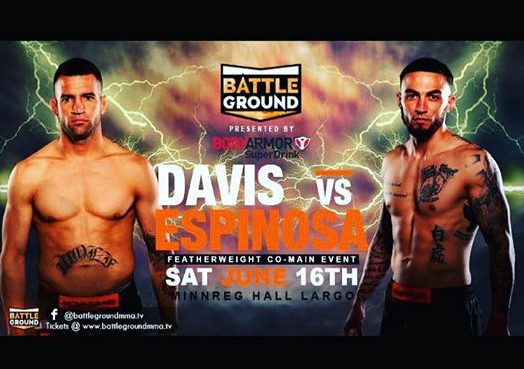 Welcome to the inaugural voyage of the Quiggin’ Out MMA podcast, hosted by Combat Press writer Matt Quiggins (@QuigginsMMA).

On this episode, Matt sits down with Batteground MMA’s Jeremy “Pretty Boy” Davis, who fights this Saturday in Largo, Fla. In the chat, Davis talks about weight cuts, current UFC stars, MMA professionalism, his future and the driving motivational force that pushes him each day. Davis makes sure to maintain his humble upbringings and sheds light on what he stands for, and it’s this very attitude that makes him stand out. His style, both inside and outside the cage, makes him an exciting prospect to watch.

Davis currently boasts a professional record of five wins with just one loss that came in a catchweight bout in 2016. Four out of his five wins have come via submission. Just one of his victories came by TKO, but it came as a result of a doctor’s stoppage. Davis has been looking for a highlight-reel knockout and is hoping that Saturday night produces just that.