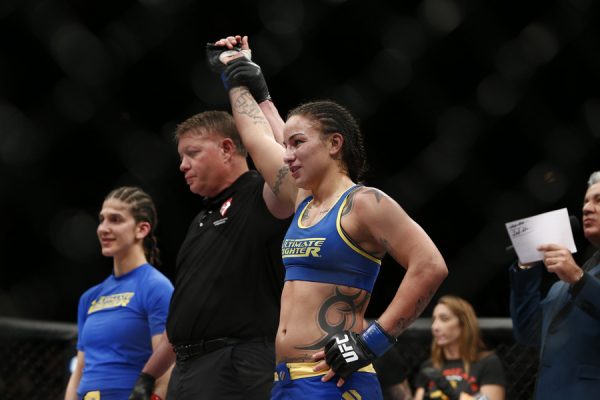 Are you still in a bind about what to get Mom for Mother’s Day? You could always treat her to the gift of mixed martial arts. Go on. Share something you love with that special lady in your life this weekend by taking in the UFC’s next pay-per-view.

What’s that, you say? You weren’t even aware there was a pay-per-view card this weekend? Don’t worry, you’re not alone. The promotion for UFC 224, which takes place on Saturday, May 12 – and is headlined by a title fight, no less – has been practically nonexistent. It’s reminiscent of the old saying that if a tree falls in the forest and no one is around, does it make a sound? Or in this case, if a UFC pay-per-view airs and no one watches it, did it really happen?

The UFC has been focused with stacking its official summer slate of pay-per-views with marquee fights and followed it up with the news this week that it has reached a new broadcast deal with ESPN. As a result, promotion for UFC 224 seems to have taken a backseat.

That’s really too bad. On paper, this is not a bad card. It could be argued that UFC 224 is a better offering than the other pay-per-views so far this year, even though those previous pay-per-views featured the likes of Stipe Miocic, Daniel Cormier, Cristiane “Cyborg” Justino, Rose Namajunas, Joanna Jędrzejczyk and Khabib Nurmagomedov. While those cards boasted big names, they sometimes came up short in other areas, most notably in terms of the depth and quality of the lineups.

The UFC 224 main card, on the other hand, is fairly solid, if not spectacular, from start to finish. The main event features UFC bantamweight champion Amanda Nunes defending her title against Raquel Pennington. Despite the fact that UFC President Dana White once famously said that Nunes would “never” headline a pay-per-view again after having to withdraw from a main-event fight last year, the Brazilian takes top billing as she looks to continue her dominant run as champion and defend her belt for a third time.

The fight between Nunes and Pennington is significant for other reasons, as well. Nunes is the first Brazilian female champion in the UFC, and she will defend her belt in her home country for the first time on Saturday. Nunes and Pennington are both gay as well, and in relationships with other fighters on the UFC roster. The fact the UFC hasn’t utilized this detail in its promotion of UFC 224 to potentially reach a whole new audience just boggles the mind, frankly.

The UFC 224 main card features other names familiar to fight fans, including Ronaldo “Jacare” Souza, Kelvin Gastelum, Vitor Belfort, Lyoto Machida and John Lineker. Jacare and Gastelum face each other in the co-main event, with the winner becoming the probable top contender in the middleweight division. Belfort and Machida open the main card in what is reportedly Belfort’s last fight in the UFC. This match-up might even make a few UFC fans fondly remember the old days of Pride. A John Lineker fight always includes the possibility of a memorable knockout from one of the most exciting strikers in the UFC.

The main-card lineup is rounded out by rising prospect Mackenzie Dern, who is looking to post her second victory in the UFC. The preliminary card also features several fighters capable of putting on entertaining performances, including Warlley Alves, Aleksei Oleinik, Junior Albini and Karl Roberson.

Where a fight card takes place also counts for a lot. The UFC returns to Brazil for this offering, and there is little doubt that Brazilian fans are among the most enthusiastic in MMA. They will be solidly behind their countrymen and women who are competing on this card, and they can create an exciting atmosphere that can increase a card’s watchability.

UFC fans have much to look forward to this summer. Next month’s pay-per-view, UFC 225, is the definition of a stacked card. The UFC 226 main event is a match-up of the heavyweight champion Miocic and light heavyweight champion Cormier, and there are rumors that UFC 227 will feature the return of both Georges St-Pierre and Nate Diaz. But fans should not forget about UFC 224 this weekend, even if the UFC has tried its best to make sure you do.