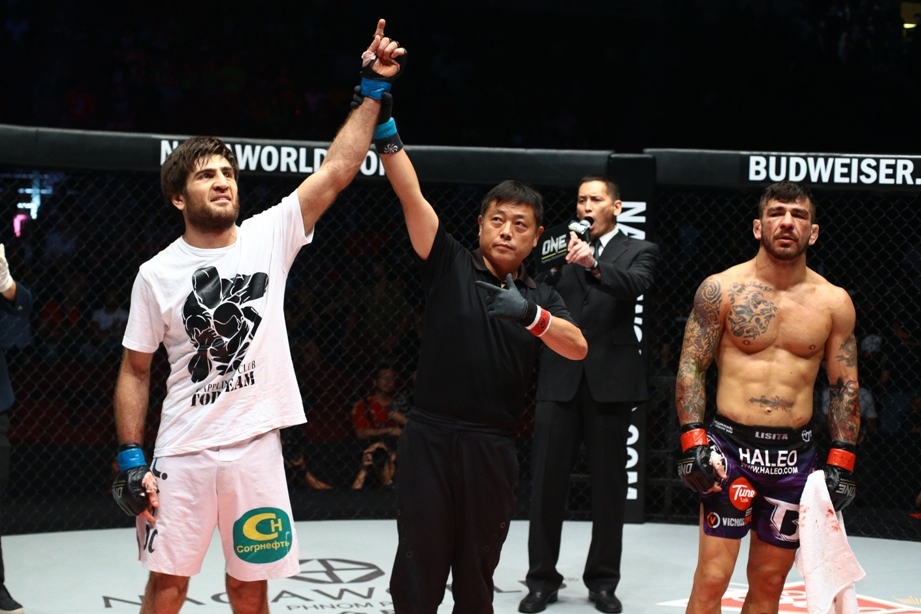 Out of Obscurity: ONE Championship, LFA 37 and Combate Estrellas 2

ONE Championship’s latest effort is a mix of MMA and kickboxing. In addition to an MMA main event that features Kevin Belingon and Andrew Leone, the show also puts the spotlight on famed kickboxer Giorgio Petrosyan. However, it’s a featherweight fight further down the lineup that draws our attention here. The match-up pits prospect Marat Gafurov against Tiger Muay Thai’s Emilio Urrutia.

The 33-year-old Gafurov has managed 15 wins over the course of 16 pro appearances. The Russian fighter, who has a background in wushu and sanda, debuted in 2010 and remained perfect through his first 15 bouts. Along the way, he eked past future UFC fighter Mairbek Taisumov and captured the M-1 featherweight crown with a victory over Vugar Bahshiev. After successful defenses against Yuri Ivlev and Lee Morrison, Gafurov moved over to the ONE Championship promotion. He quickly impressed with first-round submissions of Rob Lisita, Ev Ting and Martin Nguyen en route to capturing the league’s interim title. Gafurov became the undisputed titleholder when he submitted Narantungalag Jadambaa in late 2015, and he added submission finishes in successful defenses against Kazunori Yokota and Jadambaa in 2016. He finally relinquished the belt when he was stopped via strikes by the aforementioned Nguyen. The DagFighter product has tallied 11 submissions and one knockout in his career.

By comparison, Urrutia has an underwhelming resume. “The Honey Badger” has almost the same amount of fights as his upcoming opponent, but he’s only scored 11 victories. The 31-year-old debuted in 2013 and claimed the win in his first four bouts. Then, he stumbled in consecutive fights. After recovering with another three straight wins, he again lost back-to-back affairs. He rebounded once more, picking up two victories and a regional title before transitioning to ONE and adding another two wins, including a knockout of Edward Kelly. The Floridian has four submissions and one knockout.

Gafurov’s recent title loss was a significant result for a fighter who had been perfect for more than six years. It seems likely that a victory or two for the Russian will lead to a trilogy fight with Nguyen. ONE seems to be playing it safe by handing Gafurov a winnable fight. Urrutia is capable of scoring a stoppage, but he tends to go the distance. The Tiger Muay Thai fighter also happens to be prone to finishes, both by knockout and submission.

Gafurov is ridiculously skilled at sinking in choke submissions. He’s finished 10 chokes in his career, and he had a streak going of six straight stoppages via choke before he was floored by Nguyen in their rematch. Urrutia provided Shane Alvarez with Alvarez’s only win within his last four fights, and it came via submission. This is a tuneup fight for Gafurov. If he somehow fails here, it would be among the biggest upsets of the year. Instead, he’s likely to find the early submission finish.

The LFA’s 37th audition is the stage for flyweights of both genders to audition for the UFC. Sabina Mazo could punch her ticket to the big show if she gets past Shannon Sinn and claims women’s flyweight gold. Meanwhile, the men’s flyweight crown is up for grabs when Sid Bice and Maikel Pérez collide.

Bice is the more seasoned fighter in this pairing. The nine-fight veteran has only stumbled once, in a split-decision loss to UFC veteran Pedro Nobre under the Titan Fighting Championships banner. He debuted in 2013 and scored knockouts in his first two contests for the Sparta Combat League. After tallying three wins overall with the SCL, Bice moved over to the Resurrection Fighting Alliance, where he outworked future UFC fighter Eric Shelton en route to a unanimous-decision nod. His next stop was Titan, where he won one fight before dropping the decision to Nobre. After another successful stop under the SCL banner, Bice landed in the LFA, where he’s picked up victories in two co-headlining bouts. The Factory X Muay Thai fighter hasn’t notched a stoppage outside of those first two pro fights.

The 34-year-old Perez is a Cuban wrestler who participated in the freestyle wrestling competition at the 2008 Olympics. The Kings MMA export also won gold at the 2009 Pan American Championships. He was part of a highlight-reel double knockdown in his fight with Adam Martinez at LFA 10, which also happens to be his only pro loss thus far. His other five fights have produced three submissions and two decision wins. Perez, who was a teammate of UFC star Yoel Romero on the Cuban national wrestling team, defected from Cuba in 2015 before taking up MMA and making his pro debut in 2016.

Perez’s only loss can be chalked up to beginner’s mistakes that are especially common for wrestlers making the transition to MMA — he left his neck for the taking and kept his hands low, allowing Martinez to drop him several times. Despite these mistakes, Perez has a ton of potential. His wrestling abilities allow him to thoroughly dominate opponents. Even against Martinez, he controlled Martinez for a good portion of the first frame and only lost the round on the scorecards because of the knockdowns.

This has the making of a war of attrition. Bice is a grinder, and Perez has struggled to find finishes as he’s progressed up the LFA food chain. Both men have strong wrestling abilities that could lead to plenty of scrambles, but the finish will only come if Perez makes a mistake and ends up in a choke or an armbar. There’s an outside chance of a knockout in Bice’s favor too, given Perez’s iffy chin. If, however, this turns into a points game based on takedowns and positional control, then Perez’s Olympic-caliber skills should carry him to the judges’ nod.

The Spanish word estrellas translates in English to stars. Combate Americas’ latest series heads into its second edition, which has plenty of Latin American stars. UFC veteran Erik Perez joins the promotion after a three-fight winning streak inside the Octagon, but he fights a mediocre opponent in DJ Fuentes, who is only three fights above the .500 mark. Undefeated female strawweight Melissa Martinez also draws a .500 fighter as an opponent. That brings us to Levy Saúl Marroquín Salazar and Alejandro Flores. The bantamweight co-headliners have combined for 22 victories and just three defeats, making them one of the more competitive of the high-profile fights on this card.

Salazar has only ventured outside of his native Mexico once in his pro career, and that was in a losing appearance in Costa Rica. “El Negro” debuted in 2013 and stopped his first seven foes. His trip to Costa Rica resulted in his first loss, a unanimous decision that went in favor of his opponent, Allan Zuñiga. His next outing was his first with Combate Americas. He won the fight by split decision, but returned three months later to suffer defeat against The Ultimate Fighter 22 alum Andrés Quintana. Salazar has been perfect through three subsequent bouts, all of which took place on a single night in a bantamweight tournament at Combate 18: Copa Combate.

Oddly enough, Flores also has just one appearance outside of Mexico that also came in Costa Rica. It also proved to be his only defeat, as “Gallito” succumbed to a submission at the hands of grizzled veteran Alandro Solano Rodriguez. The 26-year-old debuted in 2013 and won his first eight fights. Along the way, he scored six stoppages. After his loss, Flores bounced back for three wins, including featherweight and lightweight championship victories under the Combate Extremo banner.

These two men seem capable of ruling over the Mexican bantamweight division, but they’ve had limited success outside of their homeland. However, they’re also separated by the level of their success in Mexico. They’ve both been champions with Combate Extremo, but Salazar’s Copa Combate tournament win marked a significant jump in the level of his competition. He topped Carlos Rivera and Marcelo Rojo on his way to the finals, where he was able to edge Dana White’s Tuesday Night Contender Series alum John Castañeda. Overall, those three adversaries held a combined 36-8 record heading into their fights with Salazar. In contrast, Flores has faced a set of opponents over his last three fights that have combined for a mere 16-9 mark before meeting the 26-year-old.

Salazar certainly separated himself from the pack with his one-night tourney win. The first fight of the night was only a one-rounder and the remaining fights featured three-minute rounds, but Salazar went the distance in that first bout, needed until the third round to finish his second opponent, and went the full three rounds in the finals. That’s no easy feat. Given his recent run, Salazar appears to be the favorite in this fight. Flores will be outmatched by Salazar on the mat, leading to a submission finish for Salazar.