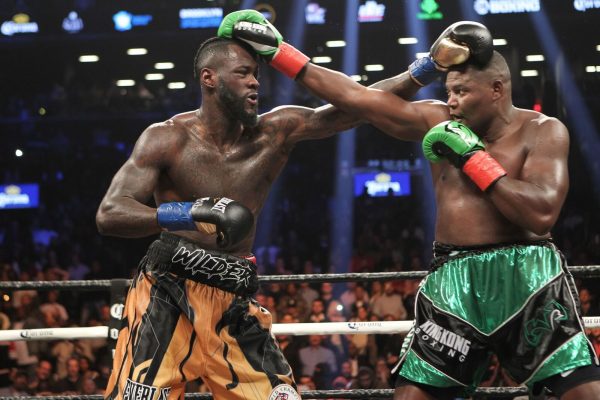 Deontay Wilder vs. Luiz Ortiz: The Sweet Science of a Story

Atop the Combat Press website is the simple mantra that “every fight has a story.” This claim was on full display on Saturday night.

Combat sports at their core feature two athletes looking to inflict as much pain on each other as possible to emerge victorious. Beyond the physical violence, combat sports can also tell an intricate story. The title defense by WBC heavyweight champion boxer Deontay Wilder against Luis Ortiz combined the best aspects of physical combat with an incredible story told over the course of their titanic struggle.

The bout began with all the usual pomp and flair one would expect from a big-time boxing event. The champion Wilder walked to the ring with his face hidden behind his trademark mask, a great marketing tool and an accessory that’s become synonymous with “The Bronze Bomber.” Well-known rapper and New York native Lil’ Kim led the champ to the ring. The celebrity guest not only scored Wilder some brownie points with those in attendance at the Barclays Center, but it also added yet another element of flash to the entrance of a world titleholder.

For all of the pre-fight spectacle, the fight itself started at a reserved pace. Wilder struggled to put any offense together early on. He was unable to unleash his thunderous right hand on Ortiz’s head. Ortiz also struggled to land anything of note early. Rather than rushing to get inside the lanky Wilder, Ortiz kept a measured pace and began to slowly work his way past the champ’s guard. As the Barclays crowd began to get restless, it seemed fans would find disappointment instead of excitement between the battle of these two heavyweights. Just as it seemed the narrative of the fight was going to be that of a plodding affair, the page turned and the next chapter began.

Almost like a new beginning rather than the evolution of a fight, Wilder stunned Ortiz late in the fifth round. Ortiz’s legs went out and the Cuban boxer was sent reeling into the ropes by a ferocious attack from Wilder. It was a sight boxing fans had seen before. Once he has his opponent hurt, Wilder swarms his adversary, often times with reckless abandon. It’s made him an easy target for people who would doubt his striking technique, but nobody can doubt the power he wields. Wilder’s undefeated record — with all but one win coming by way of knockout — solidified the champ as one of the most feared punchers in the game, even if it’s not always with the best technique.

With Ortiz on the defensive, it appeared as though this would be the moment the pendulum would swing in favor of “The Bronze Bomber.” Wilder appeared ready to land the final crushing blows to end the contest in familiar fashion. However, the story of Wilder and Ortiz took yet another turn as the bell rang and both fighters went back to their respective corners.

The sixth round would become the turning point of the contest. Ortiz had done well early on to avoid Wilder’s right hand while likely edging his adversary on the scorecards. Yet, Wilder is not a man who bothers himself with judges’ scorecards. The sixth round was “The Bronze Bomber’s” time to shine. He’d finally been able to not only land his vaunted right hand, but he did so with devastating results. He had Ortiz on the ropes toward the end of the round and seemed destined to close the evening’s festivities with an exclamation point.

As famous college football analyst and personality Lee Corso would say, “Not so fast, my friend!”

Despite being knocked down, Ortiz was the fighter who took control of the bout. He showed no signs of slowing down after being dropped to the canvas, a nod to the resiliency of the Cuban. He avoided any major damage following the disastrous ending to the fifth round and eventually took rounds seven and eight on the scorecards.

Did Wilder let his moment slip through his hands? Ortiz not only survived Wilder’s dangerous onslaught, but he’d come back to score valuable points by taking two out of the next three rounds. Where others had faltered after tasting the sting of Wilder’s punches, Ortiz appeared to absorb the damage and not only respond, but respond well.

The seventh round in particular is where it looked like Ortiz had managed to do the unthinkable. He endured through the power shots of Wilder and, like Sebastian Shaw of X-Men fame, absorbed Wilder’s punches and threw it right back to the champion. As awful as the ending of the fifth round was for Ortiz, the seventh round proved to be just as terrible for Wilder. Ortiz staggered the champion multiple times. Wilder attempted to clinch and fend off his opponent, but Ortiz’s pressure was nonstop. Head and body shots came at a ferocious pace, and while Wilder managed to stay upright, the damage was enough for the judges to award Ortiz a 10-8 round.

No doubt the Wilder critics had their tweets and social posts ready to go following the seventh frame. This was going to be their time to pile on Wilder, a boxer some considered to have a resume as weak as his chin. As Wilder let victory seemingly slip through his grasp, the critics would seize the opportunity to bury “The Bronze Bomber” once and for all.

It would’ve been an easy narrative to tell after the fight. Wilder was a fighter who built up a reputation by knocking out fighters the rest of the boxing community considered beneath him. A man believed to be among the most overhyped champions in recent memory, Wilder was going to be whisked away from the spotlight. The first major test of his career was going to be his last after they had their chance to finally validate their claims that “The Bronze Bomber” doesn’t belong among the heavyweight elites.

However, the clash of heavyweights would go through one final chapter that would set the boxing world abuzz. Just as it seemed Ortiz was en route to closing the door on Wilder’s heavyweight title reign, the champion landed a right-left combination that sent Ortiz to the canvas. The Cuban staggered to his feet as the referee was moments away from reaching a 10 count.

Ortiz seemed to shrug off the fact that he was dropped. He told the referee he was fine to continue. Wilder walked from the corner to the middle of the ring and began to flail his arms in trademark fashion. This was the Wilder everyone knew and the one fans thought they would’ve seen earlier after he scored the knockdown to close the fifth. As Wilder threw everything behind each punch, sometimes with his back foot coming entirely off the ground, Ortiz struggled to avoid the dangerous blows. The title challenger could only avoid Wilder’s offense for so long. A right uppercut sent Ortiz to his knees and the referee quickly moved in to wave off the contest.

It was an incredible ending to an incredible story. It’s part of what makes boxing such a great sport to watch. The additional rounds allow fights to play out in different ways, sometimes with multiple peaks and valleys. As was the case with Anthony Joshua and Wladimir Klitschko’s historic clash, Wilder’s title defense against Ortiz proved to have as many ups and downs as the stock market. At the end of the day, the sweet science of boxing can produce a magical narrative in the ring on any given night.

What’s next for Wilder? The champ, a man many considered not worthy to be among the top tier of heavyweight talent, finally seized his moment to silence the detractors in emphatic fashion. Say what you want about the man’s technique, but the results speak for themselves. It may not always look pretty, but it’s effective. He stands at 40-0 with 39 knockouts, which is hard to dismiss, no matter your opinion of Wilder. It’ll be equally hard to dismiss the chance that Wilder faces off against the winner of the aforementioned Joshua’s upcoming clash with Joseph Parker. Fans can only hope that the eventual bout between Wilder and either Joshua or Parker continues the trend of classic heavyweight title fights.