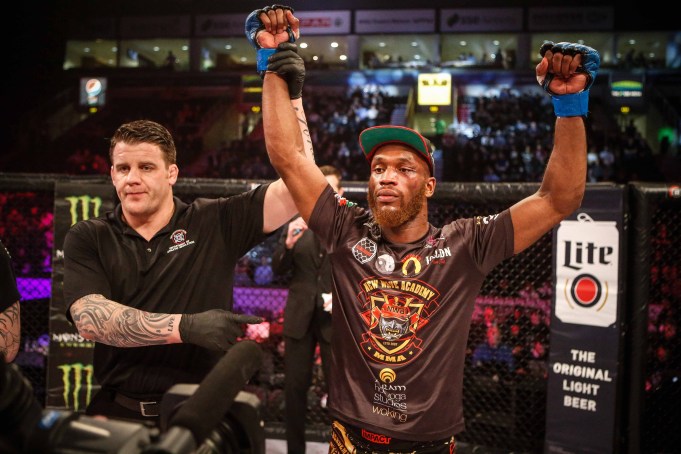 Let’s examine the welterweight division, a weight class that is loaded with talent and is constantly providing new guys toward the top of the division.

This is the second year Mukhamed Berkhamov has graced this prospect’s series, and for good reason. He truly is one of the best welterweights in the world not in the UFC.

The 23-year-old ace is an absolute beast and very well-rounded, having a terrorizing ground game and powerful strikes. He’s also a ferocious finisher, having the skills to score high-level submissions and violent knockouts.

His 2017 was very impressive again, as he scored two high-level victories. He started off by submitting Sharaf Davlatmurodov with an armbar and finished the year by brutally knocking out Bellator veteran Brett Cooper. Both of these wins have continued to show Berkhamov is truly one of the best welterweight prospects in the world.

Now the Absolute Berkut Championship Welterweight Champion, Berkhamov has the gold to back up the hype. He is already scheduled for a title defense against UFC veteran Albert Tumenov, his toughest fight to date. A win over the former UFC roster member would not only prove that Berkhamov should be in the UFC, but could be an immediate contender.

To be a young fighter that is the champion of a top-level regional MMA promotion is an impressive feat that will bring you great attention. However, it seems CFFC Welterweight Champion Sean Brady is still somehow under the radar, which is almost criminal.

Brady is a representative of Renzo Gracie in Philadelphia, which explains his solid base of grappling. However, he can throw on the feet as well, so don’t think he’s one dimensional. Not only is he skilled, but he’s just 25 years old, making him a certified prospect with big things ahead of him. He’s yet to reach his potential, which indicates that Brady is a fighter that has a very bright future.

Brady fought just twice in 2017, but it was his biggest, most important year yet. He scored a win over WWE Tough Enough alum Tanner Saraceno with a first-round submission to earn the vacant CFFC title. He finished his year off with a title defense, choking out Mike Jones to retain his belt.

CFFC has provided a lot of talent for the UFC, suggesting Brady may be on the UFC’s radar, especially as champion. Seeing as he’s still young, they may let him develop a tad more, but they should not wait long to bring Brady into the promotion.

Lohore has really come out of nowhere to become one of the top prospects in England. The guy has quietly amassed an impressive record and beat some notable talent en route to championship status.

Lohore’s a tall welterweight at 6-foot-1 and strong as an ox, usually giving him a power advantage over his opponents. The guy has knockout power and submission prowess, meaning he’s comfortable wherever the fight takes place. He’s a definite finisher, so odds are it’s not gonna go to the judge’s scorecards.

Lohore competed four times in 2017 — twice for Bellator and twice for BAMMA. His chokeout of Colin Fletcher under the Bellator banner gave him his biggest win, but the knockout of Nathan Jones gave him the BAMMA welterweight championship. His last fight of the year was a successful title defense, proving Lohore to be the best 170-pounder in BAMMA.

He already has another title defense set for March. Lohore is set to take on fellow Englishman Terry Brazier. If he scores another successful title defense, there’s no reason the UFC shouldn’t try to tempt him with an offer.

The MMA Lab has been producing some very good, high-level fighters that have been inhabiting major and minor MMA promotions in the United States for a while now. One of the gym’s best prospects comes in the form of Nakashima.

Nakashima is a technical striker. He utilizes good movement, accuracy and technique to outwork opponents on the feet. He’s not the most powerful striker, but his volume and accuracy allow for him to accumulate damage on those who bang with him.

It was a big year for Nakashima, who competed for Legacy Fighting Alliance twice. He first decisioned LaRue Burley, a respected veteran, before he scored a split verdict over Derrick Krantz to become the LFA welterweight champion.

The knock on Nakashima is that he doesn’t finish fights. This is something he will want to address going forward. The UFC wants finishers, not guys who leave it in the hands of the judges. However, given his talent level, the organization may have to ignore his reputation since he can genuinely hang with top-level guys.

One path to the big show is to accumulate gold. Young Croatian prospect Soldić has done just that. In the last two years, he has won championships in the SMMAC, Final FC, Superior FC and, most impressively, KSW organizations.

Soldić is the epitome of a blue-chip prospect. He’s just 22 years old and already has accumulated 13 wins as a pro. He’s a ferocious striker with great techniques that complement his immense power. He can put you down with his hands or legs.

He was very busy in 2017, fighting and winning five times. Soldić’s two biggest wins were his last two fights of the year. In October, he slaughtered Welshman Lewis Long with a highlight-reel head kick that sent Long to the mat unconscious. He closed the year out in a KSW headliner on late notice, upending champion Borys Mankowski to score gold and the biggest win of his career.

Soldić is, of course, under KSW contract with a championship belt, so he may not be available for the UFC to sign immediately. However, he could be a future contender in the welterweight division of the UFC.