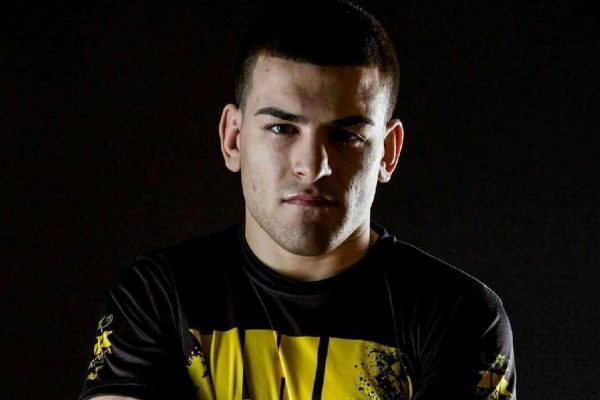 Let’s examine the bantamweight division, a weight class that is loaded with good, young talent and is rapidly becoming one of the most entertaining divisions in the UFC.

While it seems that Canada has cooled a bit in terms of prospect production and overall talent distribution in recent years, the same cannot be said about Arnett. The top overall Canadian prospect has established himself as a must-see commodity from the Great White North.

Though he’s creeping up there in age, Arnett, 33, has shown maturity and is peaking at a high level right now. Despite possessing a respectable boxing background, Arnett has scored most of his wins by submission. His four losses as a pro, the last of which came in 2014, all were by submission.

Arnett, who’s currently on an 11-fight winning streak, collected three victories in 2017. Not only did he score submission wins over Maged Hammo and Dimitri Waardenburg in title fights, but he also scored the biggest win of his career in a majority-decision nod over Johnny Bedford in another title fight.

Arnett’s collection of so much championship gold is plenty of indication that he can win the big fights against solid competition. With his trophy case currently inhabited with championship belts from promotions like TKO, Fight Night and Hard Knocks, it’s difficult for the UFC to pass on signing this exciting, skilled Canadian talent.

The parade of Russian fighters in this prospect’s series continues at bantamweight, where Kerimov is the first of three men representing his country. The undefeated fighter stormed onto the radar of MMA scouts all over the world this year with impressive performances.

Representing the notorious DagFighter camp, which has produced a number of savages, Kerimov fits the gym’s well-rounded style of immensely powerful striking, good takedowns and an educated ground game. Once a guy that was scoring a little too many decisions in his career, Kerimov has taken first-round knockouts in his last three bouts.

Kerimov competed twice in 2017, delivering two big knockout wins to really shoot his stock through the roof. It took him just 22 seconds to smash through the respected Tural Ragimov to start off his year. He followed that up with the biggest win of his career when he punished UFC veteran Takeya Mizugaki with a 3:20 stoppage from strikes in their encounter.

Right now, Kerimov is scheduled to fight in February for the Absolute Championship Berkut bantamweight strap against Oleg Borisov. This fight represents another major test in the 25-year-old prospect’s career. Another impressive win could be enough to send him to the world’s largest promotion.

Magomedov first made this prospect’s series in 2014 as a featherweight. He returns this year as a bantamweight who should be a highly sought-after commodity.

The Russian holds an impressive 18-1 record so far in his career. He is currently of the former World Series of Fighting, which has been rebranded as the Professional Fighters League. He has a grinding, rugged style where he likes to use strikes to set up the clinch and look for takedowns. From there, he is able to dominate fights and look for striking or submission stoppages.

Magomedov fought just once in 2017. He scored a hard-fought decision victory over Donavon Frelow.

The Russian handed current UFC fighter Guan Wang his first career loss back in 2013, so he can beat UFC-caliber guys. Hopefully, 2018 brings him more activity than he’s had the last couple years.

Magomedov is just 27 years old, meaning he still has many good years left of competition in him. The Professional Fighters League doesn’t put on that many events per year, so he would benefit from getting a call from the UFC. The UFC’s bantamweight division would benefit from his inclusion, too.

One of the best American prospects in any weight class right now, Torres is a name you need to know. The Titan FC flyweight and bantamweight champion has gone from undercard no-name to champion in an impressively quick amount of time.

The 25-year-old Torres has a karate background, which explains the style of striking he has in the cage. He has a wrestling pedigree as well, which rounds off his game. Torres had a highly successful amateur career that included over 20 fights, so he has much more experience than his six pro fights would suggest.

After winning the Titan FC flyweight belt at the end of his 2016 campaign, Torres came back in 2017 with three successful title fights. He defended his flyweight belt to start the year with a sub-90-second knockout of UFC veteran Pedro Nobre. He then stepped up to the bantamweight division to challenge Farkhad Sharipov. Torres scored an impressive five-round unanimous-decision victory over Sharipov to claim the 135-pound strap. He ended his 2017 campaign by defending the bantamweight crown in a choke-out finish of Gleidson de Jesus.

Given his two-division championship status, his young age and his impressive experience level, Torres could be a future title contender at either bantamweight or flyweight in the UFC. The UFC needs to ink him and start building him up to star status.

The third Russian on this list is the 24-year-old Yan. He possesses many qualities of a top prospect. He’s young, he’s been successful against quality opposition, and he has a strong camp behind him at this point in his career.

The nine-fight veteran currently runs with Tiger Muay Thai, one of the best camps for strikers in MMA. There, he’s honed his craft to become an even more ferocious striker. He pairs his striking skills with a solid ground game.

Yan scored two victories in 2017, including a revenge win over the fighter who handed him his only career loss. Yan scored a five-round decision win over Magomed Magomedov, who had previously beaten him in 2016. Magomedov is a former member of this list, who is still a top prospect in his own right. Yan then closed out his 2017 with a knockout stoppage of The Ultimate Fighter alum Matheus Mattos.

A prospect this good is a hot commodity that most MMA promotions are going to try to get their hands on. The UFC needs to jockey for position on Yan, who has future contender written all over him.