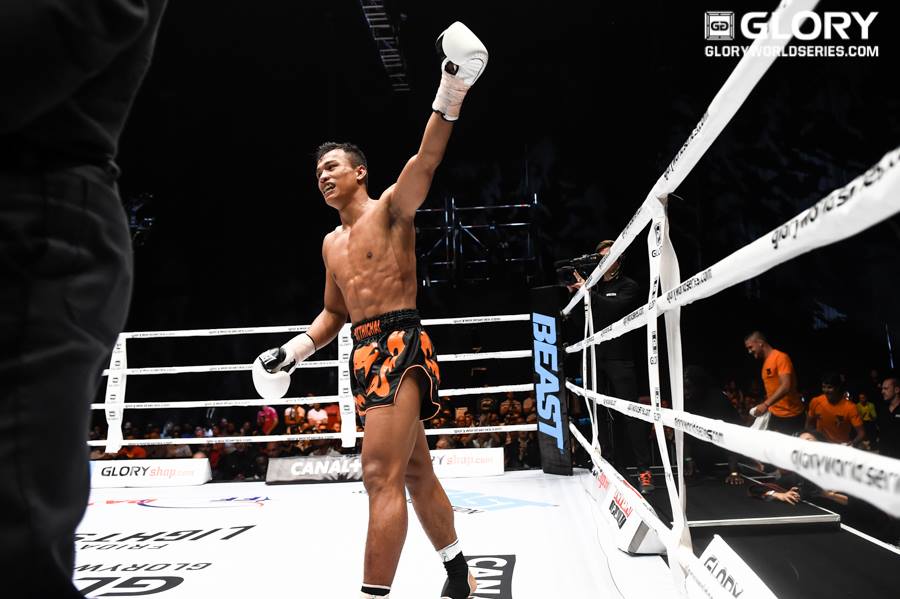 It was a relatively quiet November for the heavyweight top 10. Only Roman Kryklia was in the ring. He took out Nordine Mahieddine by decision at Nuit des Champions 24 to stay at No. 9 in the rankings.

Ironically, it was action outside of the light heavyweight division that impacted the rankings this month. Seventh-ranked Ibrahim El Bouni moved up in weight for the K-1 World GP 2017 Heavyweight Championship Tournament. El Bouni knocked out Koichi and Roel Mannaart, but fell by decision to Antonio Plazibat in the finals. With the move up to heavyweight, El Bouni falls from the rankings, opening the door for Frenchman Zinedine Hameur-Lain to re-enter at No. 10.

The bottom portion of the middleweight division saw plenty of action in November. Cyril Benzaquen dropped a decision to Malik Aliane at Warriors Night and now tumbles outside the top 10. Similarly, Ibrahim El Boustati, who was tied for No. 10 with Benzaquen, was involved in a controversial fight at Enfusion Live 56 with Ulrik Bokeme. Originally deemed a disqualification win for El Boustati, the fight was later overturned to a victory for Bokeme. The loss drops El Boustati from the top 10. The No. 10 spot now goes to Loren Javier Jorge, who defeated Mehdi Bouanane by decision at the same event.

Top-ranked Artur Kyshenko was in the ring in Sweden, where he scored a knockout victory over Constantino Nanga at Rumble of the Kings: Uprising to hold onto his No. 1 ranking.

The lightweight top 10 was the month’s busiest, with eight of the fighters in action. Top-ranked Sitthichai Sitsongpeenong took care of business at Wu Lin Feng: Dragon King Challenge, where he crushed China’s Yi Long with a vicious left head kick. There were five ranked fighters in the ring at Kunlun Fight 67. Second-ranked Superbon Banchamek edged seventh-ranked Davit Kiria by majority decision to advance in the promotion’s 64-man tournament. Joining Superbon in the semifinals will be fourth-ranked Marat Grigorian, who topped eighth-ranked Mohamed Mezouari. Also, fifth-ranked Buakaw Banchamek brutally knocked out Marouan Toutouh at the same event. Nuit des Champions 24 in France featured No. 6 Chingiz Allazov besting Cedric Manhoef by decision. Finally, No. 10 Vald Tuinov won a decision over Ridvan Güden at KINGZ Fight Night IV. All eight fighters maintain their rankings from the previous month.

Featherweight had another busy month, with one of the division’s top fighters taking a loss. Masaaki Noiri fell by decision to Abdellah Ezbiri at Nuit des Champions 24. Noiri slides to No. 3 with the loss, while the recent GLORY tournament winner Ezbiri climbs to No. 7. At a combined event between Glory of Heroes and Strikers League, China’s Wei Rui continued his winning ways by defeating Jesus Romero via decision. Rui moves up to the No. 6 spot in the rankings with the win. Kunlun Fight 67 hosted an eight-man tournament that featured fifth-ranked Ilias Bulaid. Bulaid took out Petchtanong Banchamek in the opening round, but could not continue. That left an opening for Yang Zhuo, who defeated eighth-ranked Wei Ninghui, David Mejia and Singdam YOKKAOSaenchaigym to claim the tournament title. Zhuo enters the rankings at No. 8, while Ninghui slides to No. 10. The new addition bumps Gabriel Varga and Petchpanomrung Kiatmookao outside the top 10.

Four of the sport’s best fought in November, with Sitthichai Sitsongpeenong, Superbon Banchamek and Artur Kyshenko picking up victories. Masaaki Noiri’s loss in France breaks the tie for ninth place and sends Noiri outside the top 10.

Sixth-ranked Iman Barlow took on Sofia Olofsson at Rumble of the Kings: Uprising in Sweden. Barlow was upset by the Swede, causing her to slide to No. 8 in the rankings.