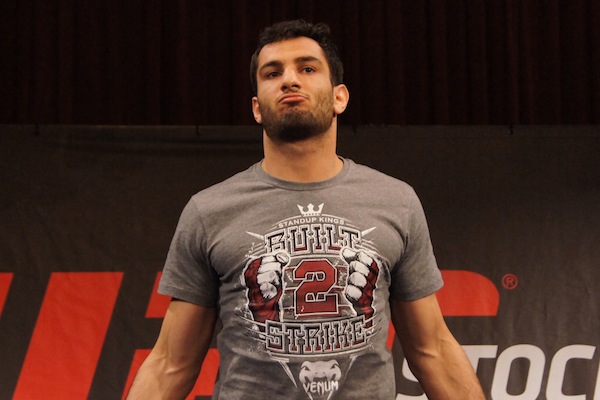 There are a plethora of events slated for Bellator MMA in the coming months. Bellator 185 kicks off that run at the Mohegan Sun Arena in Uncasville, Conn., on Oct. 20.

In the main event, Alexander Shlemenko returns to the Bellator cage against UFC veteran Gegard Mousasi, who makes his promotional debut. Shlemenko has gone almost a whole year since his last fight with Bellator, but he has remained busy in his native Russia, where he was able to avenge a previous loss to former Bellator middleweight champion Brandon Halsey under the M-1 Global banner. Mousasi comes in off of five consecutive victories inside the UFC, including wins over former champions Vitor Belfort and Chris Weidman.

The original co-headliner between fan-favorites David Rickels and Brennan Ward was scrapped, so Neiman Gracie will step up to fill the hole. He, too, has to deal with a late change after Javier Torres withdrew with an injury. Zak Bucia will step in to face Gracie. Bucia remains undefeated through six fights, including four Bellator outings. Bucia, a 26-fight veteran, is on a three-fight winning streak.

Bellator will also push the women’s flyweights onto the main card with two bouts in the division. Heather Hardy takes on Kristina Williams in one contest, while Ana Julaton makes her way from ONE Championship to fight Lisa Blaine.

With the scrapped fight between Rickels and Ward, the door opened for lightweights Marcus Surin and Ryan Quinn to join the main-card fray.

The preliminary card airs on Bellator.com at 7 p.m. ET. The main card goes live at 9 p.m. ET on Spike TV.

Alexander Shlemenko was once the Bellator middleweight champion, but his recent Bellator outings haven’t gone so well. Is Shlemenko still a legitimate threat in the division, or is he just here to give Gegard Mousasi a big name for the UFC veteran’s Bellator debut?

A little of both, actually.

Bellator’s middleweight division does not represent the deepest waters a fighter can traverse for this promotion. Shlemenko’s status as a former champion makes him somewhat of a noteworthy name in the division. If the Russian was to win a couple of fights in a row, he would be right back in the title picture. He’s not a complete threat — the last few years in Bellator have seriously put a dent on his stock — but we can’t discount his past success.

Shlemenko is also a good name to open Mousasi’s Bellator career. On paper, this should be a mismatch in favor of Mousasi, who left the UFC as one of the promotion’s top 185-pounders. Mousasi beat some legit opponents, all of whom are a lot tougher competition than he should face in Bellator.

Shlemenko hasn’t particularly fared well against opponents much bigger than him in his recent Bellator outings. He has, however, been able to go on a run outside of Bellator while competing in Russia. Shlemenko has won his last five fights, including his recent outings against Brandon Halsey and Paul Bradley. Halsey has been on a decline since beating Shlemenko, but it is an avenged loss for Shlemenko nonetheless.

This is a big fight for both men. Mousasi can get a title shot with the win, but a Shlemenko victory can put the Russian right back in the good graces of Bellator as well.

This main card — from a major promotion, let’s not forget — features two women’s flyweight bouts. The combined record of the four ladies is 4-2 and only one of the women has more than one pro fight under her belt. Is Bellator failing in its attempt to establish the women’s 125-pound weight class, or is this the proper strategy? Will any of these ladies impress on Friday night to light a fire in the division?

It’s not failing, per se. Bellator is doing the right thing in putting these fights on the main card. Not many of these women have been pushed into the spotlight before. How else does a promotion do that besides putting them on the main card? It’s hard to push undercard fighters when you’re not the UFC. Not many people outside of the hardcore fanbase really look beyond the featured fights. In order to catch the casual eye, an organization must put these fighters on the main card.

Heather Hardy is certainly a potential top performer on Friday night. Hardy, who is moving over from the world of boxing, could help to build this division. Her first fight was a slow one, but what more can you expect from someone making their MMA debut? With her boxing background, Hardy has the ability to put on an entertaining display of masterful striking. People want to see fighters get the knockout in devastating fashion. Well, Hardy could deliver.

While this lineup features some of the lesser-known ladies on Bellator’s roster, the company has also added the likes of Valérie Létourneau, who is set to make her promotional debut in December. She’s a former top fighter at both the bantamweight and strawweight levels in the UFC. The weight cut to strawweight was too draining for her, whereas fighting at bantamweight left her at a disadvantage against larger opponents. Flyweight seems like the right home for the UFC vet.

It’s going to take time for Bellator to build this division. The company hasn’t even put the belt on the line yet.

Neiman Gracie and Zak Bucia. Obviously, the Gracie name brings a lot of hype, and Neiman has proven it in spades so far. Six fights and six wins for Gracie, with only one of those victories not ending in a submission. He has some tantalizing grappling that provides a change of pace for this card, which has a lot of fighters who are more apt to strike than to grapple. Throw in the late change of opponents for Gracie, who was initially expected to fight Javier Torres, and it only makes this match-up more interesting. If you want to see a great display of grappling, this is your fight.