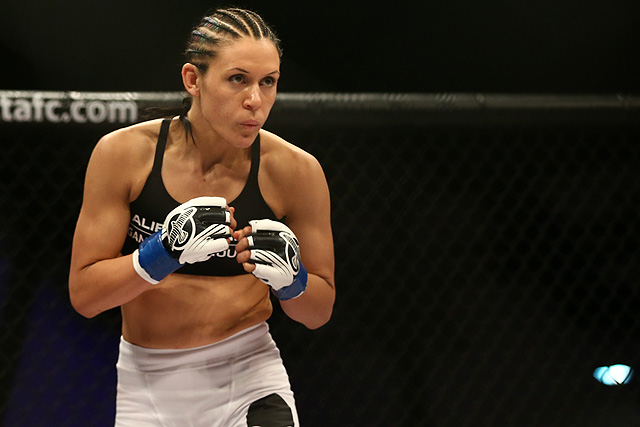 So, week four was a particularly hard one.

I’ve been to many fights in my life and had many teammates fight. One of the worst things to hear after one of them loses is to hear them apologize. When feeling so low after a fight that didn’t go their way, they feel like they let down everyone — their family, their team, their coaches — and don’t get me wrong, I have seen fights where they just gave up, but that was not the case here. Honestly, the ones that are usually apologizing are the ones that fought their asses off and should never be apologizing to everyone.

Lauren Murphy was a high seed in the tournament, but Nicco Montano pulled off the upset and won the fight. One thing about the fight game is that you can envision things going a certain way, but anything can happen when you get locked into that cage. But it was a good, hard-fought fight by both Lauren and Nicco.

Getting back to the house and in the days that followed, it was still eating at Lauren — but of course it was! She saw herself with a UFC belt around her waist, but instead was out of the competition in the first round. So I understand her being upset. The thing is, though, everyone deals with things differently, and sometimes being sad about what happened turns to anger and resentment. It naturally flows that way for some people.

We had six weeks in the TUF house, and obviously we were there for the competition, but on top of that it was an excellent training experience. Also, you never know what is going to happen these six weeks — someone could get hurt, someone could not make weight, you never know — so there might be a spot open in the tournament if you continue training and not checking out completely.

Eddie Alvarez, as our coach, knew this as well. It is not over until it is over. I have said it before in the other weeks, but I will say it again: Eddie was an awesome coach, as were his assistant coaches he brought in. One of the things I appreciated about him is that he doesn’t sugarcoat his thoughts and training philosophies. He is outspoken and, though some might call it a little brash, he tells it like it is.

The day after the fight, Lauren opted out of coming to practice. Eddie was not a fan (to put it lightly) of that decision. He believed she should have showed up. She did not necessarily have to practice, but he wanted her to be present and was disappointed that she was not. Again, it is a difference in opinions here. Personally, I do understand where Eddie is coming from, because of the nature of this tournament. On the other hand, though, it was clear to see Lauren’s pain in dealing with what happened. It came down to a clash of coping mechanisms.

Don’t ask me, though. I loved Eddie as a coach and thought he was fantastic, but I also loved Lauren and cared about her as a friend. So I just awkward-cactused in the corner, because I don’t like conflict and that’s what I do when I feel uncomfortable. Anyhoo, I am going to slowly crabwalk out of that topic and on to more fun things.

We had No. 5 Maia Stevenson against No. 12 Sijara “Sarj” Eubanks.

Maia was on Justin Gaethje’s team, so we didn’t have too much time with her. But through our encounters around the house, she was awesome. I really liked her. You could tell she was a mom by cooking for people and just the way she took care of the other people in the house (and by the wide-eyed disapproving mother looks she gave mine and Barb Honchak’s shenanigans — it wasn’t a bad look, just a “what is happening right now?” mom look). She is a fierce competitor, which is why it sucks to hear, “She is best known to be the wife of UFC vet Joe Stevenson.” I mean, I get it, he was on the show twice and is well known, but damn, give her the respect she’s earned in the cage! I am not a feminist by any means, but it’s not cool that you define someone by their spouse or significant other. She is one tough cookie in her own right, and that’s how she should be known.

For Team Alvarez on the docket, we had Sarj! She was one of the Rose-room crew, and she is probably the most adorable badass you could meet (and yes, she would not like being called adorable, but ask Ariel Beck, who’s the one who deemed Sarj that because she was just freaking fabulous). Sarj fought with Invicta and she fought some tough people. From the first week, she was one of my favorite training partners, because we had good overall exchanges and we pushed each other. I was super excited to see her get in there and show the world what she can do, a point she wanted to make because in some fantasy realm she was seeded No. 12 in this competition. I’m not sure who was smoking the fairy dust when that one was decided, but she made it a point that she was going to prove them wrong.

Sarj was one of the four of us in the Rose room, and it was great getting to know her. It’s funny, because we come from completely different backgrounds and, as she told me once, never in a million years would she imagine us being friends. She would have bet good money on it, ha, but it happened. Turns out, we’ve got much more in common than meets the eye. Her story and the way she talked about her baby and girl were awesome. She is seriously fabulous.

I’ll be honest. I was intimidated by her when I saw her at the tryouts, because I thought she would hate my goofy ass, but hey, thankfully I was wrong. Though, when I was doing anything off the wall, I would turn to see the look on her face to gauge if I had gone too far — haha. Her reactions to my antics and Ariel (whom me and Barb deemed the person to teach us to be normal, much to her chagrin) were what kept me from doing too many crazy things.

In every fight, getting into the cage on fight day is the fun part. The worst part is the weight cut the day before. I’m not saying it is always particularly hard to make the weight, but damn, dieting meticulously and then depleting your body of water is not fun. For me and many fighters I know, the real fight is the weight cut. Once you’re through that, then you get to go have fun.

Sarj had never made 125 pounds before. She had been fighting at 135, but she knew that even though it wouldn’t be fun, she could make it. None of us on Team Alvarez doubted she was going to make the weight, unlike Team Gaethje, who were all shocked when she did. They can say otherwise, but did y’all see their faces when they showed the weigh-ins? Yeah…

Sarj is one tough cookie and she will always keep fighting. It’s one of the qualities I admire the most about her. And you know what? She did make weight and got a fresh haircut out of it, too, haha. If anyone is looking for some dreads to be cut, we’ve got #CutsByAriel. When it comes down to the wire and your future is on the line, you do what you have to do.

Maia made pancakes as per her routine, and they did smell fantastic. As a former — and sometimes current — fat kid myself, when free food is offered and you can, you don’t turn it down. OK, it was more than that for Sarj here. You don’t fight usually because you hate or despise the other person. It is our job, our career. I mean, we were all living in a house together, so why not share some food?

The fight was a good one. Sarj walked out with her game face on, as did Maia. They had some good exchanges on the stand-up, but once Sarj got her hand on her and it went to the ground, it was game over. Maia made it out of the first round because the time ended, but in the second round Sarj got her down, secured position and locked on a vicious kimura. Then, in my favorite moment besides seeing my buddy win, she goes over to Dana White and yells “Twelve!! Twelve!!” Haha. His face said it all. It basically said, “Yup, I know,” as he nodded his head.

It was finally a good time in the locker room post-fight. Sarj was letting the excited nerves settle and turned to the group and was all, “Oh my God, did I yell at Dana White?” Haha. Sure did, “Twelve,” you sure did. But that’s OK, because you showed them that they were wrong.

Maia was sad, of course, for not coming out a winner that day, but you know what? It happens. She showed a lot of heart and showed that she deserved to be in the competition. It was just not her day. I know the pain of defeat, but know wholeheartedly that she will rebound with a fury.

So, the next fight was announced. We’ve got No. 15 Gillian Robertson against one of my favorite humans, No. 1 seed (in Eddie’s words) Barb Honchak. Technically, she was the No. 2 seed, but whatever. I’ll stand by Eddie and what he said.

Anyway, stay tuned for next week and see what adventures we can get into. Toodles for now! I’ll leave you with a high five, good game and, as always, a plethora of awkward hugs.