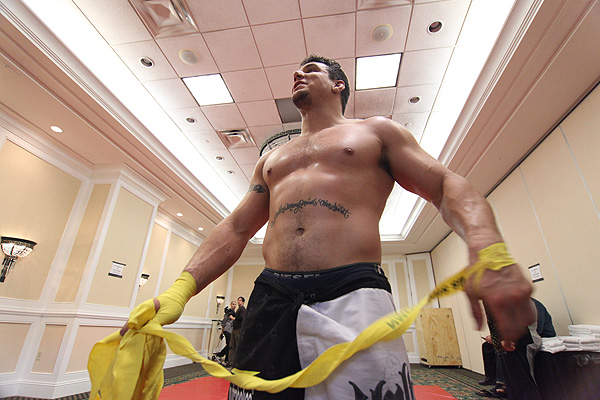 Bellator MMA’s heavyweight division has come along nicely in the past year. The promotion has made strides in signing both Fedor Emelianenko and Matt Mitrione in that time to turn what was a disadvantage into one of the company’s stronger divisions. Bellator has kept up its stride with the signing of former UFC heavyweight champion Frank Mir.

Mir marks another signing of an aging veteran the UFC decided just wasn’t worth the money anymore. A suspension has sidetracked Mir’s career until the spring of 2018, but, nonetheless, the signing marks another addition that further deepens Bellator’s heavyweight ranks. What once was a weight class occupied by very few top heavyweights, if any at all, now houses some fighters who have turned this into a competitive division.

Bellator has an interesting choice here. Mir’s suspension won’t be lifted until next April. So, the company must decide what to do with the former champion until then. It’s a situation akin to that of another UFC veteran, Rory MacDonald. MacDonald signed for Bellator and took his time to recuperate from injuries before actually debuting for the promotion. Between his last fight in the UFC and his first fight in Bellator, MacDonald spent a year on the shelf. Mir will face at least two years on the shelf before making the walk to the Bellator cage for the first time.

Mir could very well be 39 years old for his next fight, which, unlike in other weight classes, isn’t so detrimental for a fighter in the heavyweight division. In fact, most heavyweights have begun to shine late into their 30s and early 40s. However, Bellator would be wise to make a fight for Mir directly following the end of his suspension.

Who should he fight?

Well, Bellator has the aforementioned Emelianenko on the roster. A fight pitting Mir against Emelianenko was on the minds of fans long before MMA became the growing sport it is today. This is a fight that satisfies the hardcore portion of the fanbase. It isn’t the same as Emelianenko’s clash with Mitrione, which brought with it more immediacy and title talk, but Mir has the added benefit of standing next to Emelianenko as two of the all-time best heavyweights. Unfortunately, they were at the top of their game while fighting in competing promotions.

It wasn’t an unusual suggestion back then to pair these two in a dream match-up, and it isn’t now either. Bellator has long used the legend aspect of fights to draw in the casual eye. This fight is something for those who have waited a long time to see Emelianenko take on the top of the UFC’s heavyweight roster from a decade prior.

Bellator MMA has done such a good job of keeping viewership high with the “legends” fights, regardless of how they are pointless and lacking in any sense of direction or possible championship fight fallout. Yet, the promotion can use this fight, along with another battle of legends to form a tentpole event for the spring.

Mir’s first Bellator fight shouldn’t be against someone like Mitrione, unless it’s finally the long-anticipated announcement of a Bellator heavyweight title fight featuring the two men. Mir’s Bellator debut shouldn’t come against anyone but the guy that fans have wanted to see him fight for more than a decade. Bellator won’t be able to pull off the signing of Randy Couture or Brock Lesnar to fight against Emelianenko, so the next best thing is this fight with Mir.

So, no, Mitrione shouldn’t fight in a rematch with Emelianenko. Let Emelianenko rest instead. Then, give the Russian a fight with Mir. It could undoubtedly be considered a “legends” fight, but it would be one with some meaning in a heavyweight division filled with plenty of uncertainty.

It makes sense for viewership numbers, but it also makes sense for the natural progression of the division. Under Scott Coker’s leadership, Bellator has been careful to bring this division along slowly after failing miserably in its previous incarnations, and it shouldn’t change course now. It’s time to set course for a fight between Mir and Emelianenko.