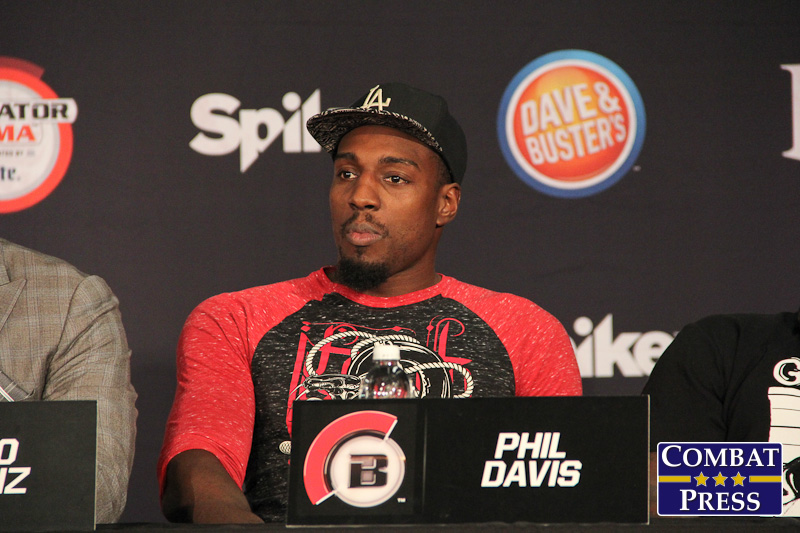 Although the task at hand will be tough for former UFC light heavyweight contender Phil Davis, he wouldn’t have it any other way in his Bellator debut.

Davis, a consensus top-10 light heavyweight, left the UFC earlier this year to sign with Bellator. Instead of being presented with a “showcase” fight or thrust into headlining spots, the former Penn State Nittany Lion is taking part in a one-night, winner-take-all tournament for a shot at the Bellator 205-pound title.

“It’s been such a great welcoming,” Davis told Combat Press. “It was tough leaving all those people who work behind the scenes, but everyone in Bellator has been super great. It’s like being the new kid at school. I’m having to learn everyone’s name.”

Emanuel Newton is a name Davis already knows. Newton likely won’t be as welcoming on Sept. 19. The former Bellator light heavyweight champion will be Davis’s opponent for the semifinal match-up. Filling out the rest of the field are Muhammed “King Mo” Lawal and Linton Vassell. Their combined Bellator records sit at a healthy 19-6.

However, Davis, or “Mr. Wonderful” as he’s known, is widely considered by many fans to be the favorite heading into the competition. Despite the vote of confidence from fans and analysts, Davis isn’t losing sight of his goals.

“A lot of guys can make a situation far worse than it should be by taking in all these external variables,” Davis said. “I want to win, not for the money, but because of the fact that I love to compete [and] I love to win. I enjoy the process of becoming champion in the gym. I don’t mind the bruises.”

The aforementioned Newton will be a stiff test for the top light heavyweight. Newton possesses a champion’s resolve and a unique fighting style from what most fighters have seen.

“He’s different. He’s just special,” Davis said. “He does things that your average fighter will not do, which makes him hard to prepare for. But at the same time what makes the scenario possible to do those things is, he needs to have the right distance [and] the right opportunities. When you control the range and the opportunities, you can eliminate a lot of those things.”

The tournament aspect presents a set of unique challenges in terms of training and fighting, but also a nice bonus if Davis emerges victorious. If Davis makes it past Newton, he’ll have the chance to score victories over two of the division’s top fighters.

“Why not fight the top of the division all in one night?” Davis said. “It took me years to amass victories over No. 1 contenders in other companies. Now I’m going to be able to fight definitely one of the top guys, but possibly two of them. It’s great to come in on one night, first show, and let them know where they stand with me.”

Davis has always been considered a top talent since stepping into the world of MMA. He has numerous credentials from his Penn State wrestling days and has showcased his growth while competing at the top level of the sport. It’s top level wrestlers like himself who Davis believes will become the future of the sport.

“I called this years ago,” Davis said. “The sport is a little too young, but in the next couple of years the higher promotions are going to start recruiting and signing top 0-0 prospects because of their athleticism — because you know what a national champion can do.”

While Davis envisions what the future of the MMA landscape will look like, “Mr. Wonderful” aims to shake up the present state of Bellator MMA. A world title eluded him while in the UFC, but a change of scenery is already doing wonders for Davis behind the scenes.

“It’s good to have a little bit of change to keep from getting complacent,” Davis said. “I think it’s a great opportunity to stay mindful of my overall goal and stay hungry.”

His hunger for competition will be well fed on Sept. 19 during the one-night tournament. He wouldn’t have it any other way.

Phil would like to thank all of his coaches, teammates and sponsors for their contributions. He would especially like to thank Oak Grove Technologies and Affliction Clothing for always being with him. Follow Davis on Twitter: @PhilMrWonderful
Advertisement