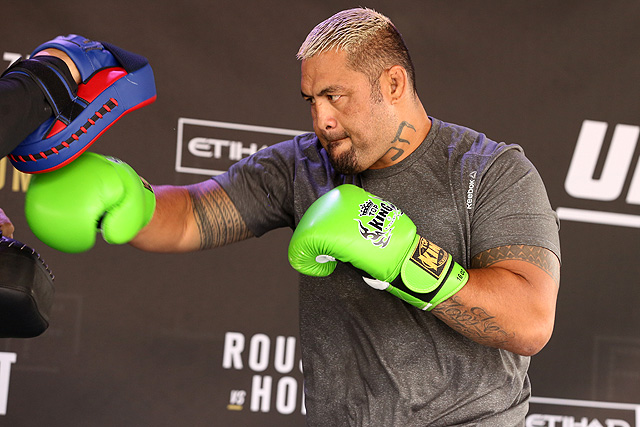 Mark Hunt: Beating the Clock and Those In His Way

The year was 1974. Stephen King had just published his first of many novels, Carrie. The United States was dealing with the resignation of President Richard Nixon in the midst of the Watergate scandal. Muhammad Ali was Involved in the infamous “Rumble in the Jungle” heavyweight title fight against George Foreman. While all of this was taking place, a boy was born in South Auckland, New Zealand, with a simple name and a bright, bright future.

Mark Hunt is no stranger to the MMA world. His tenured resume includes stints in K-1, Pride, Dream, and of course, the UFC. When the UFC acquired Pride and its roster, the company attempted to buy out Hunt’s contract. The kickboxer sported a dismal 0-5 record in his last five bouts, which were all finishes. Granted, those losses came to fighters like Josh Barnett, Fedor Emelianenko, Alistair Overeem (we will get back to that one later), Melvin Manhoef and Gegard Mousasi, but a loss is a loss. Without sounding cliché, these men were the murderer’s row of opponents that one could face in a career, let alone consecutively. However, Hunt is a fighter, and it just seemed like an issue of pride to keep fighting.

Hunt’s UFC debut, which took place in September 2010, was spoiled when he was defeated in just over a minute at UFC 119 by Sean McCorkle. The future seemed to be dimming on the “Super Samoan,” who seemed to be on his way out. Then it happened. Hunt went on a tear, winning his next four bouts in a row, including three vicious stoppage victories. At the time, Hunt was 39 years old. If one thing is consistent in the world of MMA, it’s that age and combat sports don’t mix. Yet, Hunt showed no signs of stopping.

The UFC took notice when it booked him against former UFC heavyweight champion Junior dos Santos. The fight between JDS and Hunt was a back-and-forth battle that looked like it would go to the judges until dos Santos pulled a spinning hook kick out of nowhere and ended the winning streak of the surging Kiwi.

Hunt bounced back and participated in one of the greatest battles in the division’s history when he took on Antonio “Bigfoot” Silva. Hunt’s heart was nearly impossible to predict. The bout would end up being a well-deserved draw, but it was marred with controversy when Silva failed his post-fight drug test.

Hunt was given another incredibly difficult test when he was pitted against Roy Nelson. Hunt passed with flying colors, though, and became one of the first men in the UFC to knock out “Big Country.” He even did it in walk-off fashion. It was with this performance that Hunt was given a chance at a heavyweight title, albeit an interim belt. Still, it was a title shot for the 40-year-old.

Hunt met Fabricio Werdum as a result of a lingering injury that kept Cain Velasquez out of action. Hunt has a reputation of stepping up when opportunity presented itself. The “Super Samoan” was winning the fight until he was stopped by a beautiful flying knee thrown by the man who would later become the undisputed UFC heavyweight champion.

Hunt’s luck didn’t get any better when he was matched up with current heavyweight champion Stipe Miocic. Hunt made it to the fifth and final round, but he couldn’t get past Miocic. He suffered the first back-to-back losses since his start with the organization. His path was looking bleak. It seemed that the elite of the division had his number. However, the fighting spirit of Hunt would not quit.

Hunt was given a rematch with Bigfoot. This time, he didn’t let it go to the judges. Hell, he didn’t even let it go out of the first round.

His next opponent? Frank Mir. Mir was looking better than he had in some time, despite having just come off a decision loss against Andrei Arlovski. Hunt stopped Mir with another famous walk-off finish in the first round.

Hunt was then given the chance to welcome Brock Lesnar back to the Octagon after the star’s years of absence from the sport. Hunt’s power showed to be an issue for Lesnar, but the pro-wrestler did what needed to be done to get the unanimous decision. Yet again, though, Hunt’s opponent failed a post-fight drug screen.

Another loss for Hunt, this time to Alistair Overeem, followed in March. Shortly after the loss, it was announced that Hunt would take on rising contender and fellow knockout artist Derrick “The Beast” Lewis in Auckland. This did not seem to really make a lot of sense. Hunt wasn’t getting any younger, and this just seemed like the UFC using Hunt to further the prospects of a man who could be just one or two wins away from a title shot. Hunt, now 43, just seemed like a sacrificial lamb.

Then it happened. Again.

Hunt looked incredible against Lewis on Saturday night at UFC Fight Night 110. He wasn’t reckless. He wasn’t gassed or tired. He looked damn good. Lewis, on the other hand, looked sluggish and unwilling to engage. Between rounds, Lewis had a look in his eyes that can only be described as a “What have I gotten myself into?” blank stare. Hunt was landing over and over. The Kiwi took some of Lewis’s shots and continued to move forward, almost in a zombie-like trance. It was a thing of beauty. Finally, the fourth round came. It seemed like it would only be a matter of time before Hunt landed the finishing blow. When the stoppage came late in the fourth frame, it was perfectly justified. Lewis seemed to just give up.

The post-fight speech is where the strange became bizarre. Hunt thanked Lewis for not being a cheater. He suggested that he may have retired if he lost this bout, but saved face by saying that there is still life left in him. Meanwhile, Lewis turned heads with his post-fight words. Lewis mentioned a lingering back injury that he suffered years prior and talked about how this would be his last fight.

The man who was a win or two away is walking away from the sport. Does this cheapen Hunt’s victory?

When two fighters enter the cage, they’re seeking the win. They give it 110 percent and pour in months of blood, sweat and tears to achieve victory. They are there to further their careers. To become champion. When a fighter is disinterested or distracted, it shows in their performance.

Lewis had a great game plan that, if properly executed with full confidence, would have caused issues for Hunt. He employed leg kicks, but he didn’t ever seem ready to pull the trigger. He was constantly backing up and circling into Hunt’s power arm. These are things a focused fighter shouldn’t and wouldn’t do. Lewis may be less experienced to the eyes of the UFC fans, but his record shows that he is no slouch. He didn’t show up, and that unfortunately takes away a lot of the credibility from Hunt’s win.

That being said, Hunt did look impressive. He doesn’t seem to be gunning for a title shot just yet, though. Instead, he wants revenge against two men who have defeated him: dos Santos and, of course, Overeem.

The fight against Overeem should not happen. Hunt already has two losses against Overeem, and with Overeem’s past of failed drug screens and controversy, it just seems like a bad place for the UFC to go.

The match that is more likely to happen is the one that pits Hunt against dos Santos. The pair’s first encounter was a great fight. Hunt has only gotten better since. Dos Santos has improved, too. The Brazilian is coming off a loss to current champ Miocic, so he needs a big win.

If the UFC is feeling bold, it could go in a different direction and pair Hunt with Francis Ngannou, but the match-up could backfire on the UFC and another of its stud heavyweight prospects, just like it did with Lewis.

If Hunt wins, he may be close to another title shot. Hunt, a 43-year-old fighter with a seemingly unimpressive 13-11-1 (1) record, may challenge for the crown. If Hunt is granted a title shot anytime after March 2018, he will have the chance to become the oldest champion in UFC history, passing former heavyweight champion Randy Couture.

Hunt will continue to defy all odds. He will continue to overcome any adversity. He has the potential to become UFC champion. That’s not bad for a man who could have taken the money and walked away seven years ago.