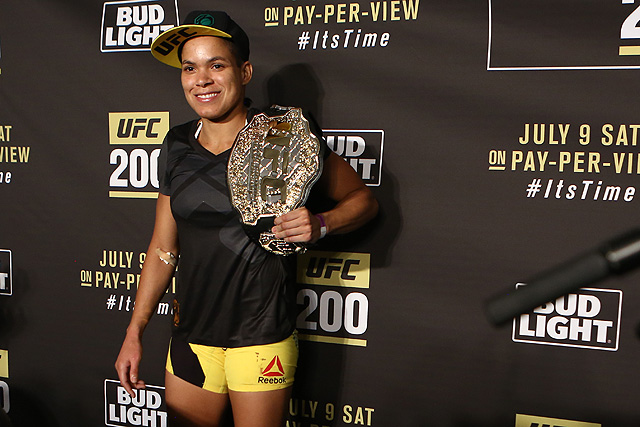 It’s Time To Embrace ‘The Lioness’ Era with Amanda Nunes

For the second straight year, UFC women’s bantamweight champion Amanda Nunes will be featured in the main event of the UFC’s card during International Fight Week.

Last year, due to the failed drug test of Jon Jones, Nunes was bumped to the headlining fight of UFC 200 against Miesha Tate, whom Nunes defeated in the first round to become the first-ever Brazilian to win a UFC women’s championship.

Since then, Nunes has gone on to make quick work of former champion Ronda Rousey, who we haven’t heard from since UFC 207. Now, Nunes is preparing for her second title defense. The champion will take on Valentina Shevchenko at UFC 213 on July 8. The move to have Nunes headline this event for the second straight year can be a great opportunity for both the promotion and the fighter.

From a UFC marketing standpoint, Nunes checks plenty of boxes. She has beaten two legends in the women’s bantamweight division. In her personal life, she has been open about her lesbian sexuality. She is dating UFC strawweight Nina Ansaroff, whom she believes could one day dethrone strawweight champion Joanna Jędrzejczyk. All of these factors make Nunes an easy sell to fight fans all over the world.

Meanwhile, Nunes has a chance to cement her legacy. She can prove to the fighting world that this is now the time of the “Lioness” and we’re just all here to witness it. She previously defeated Shevchenko via decision, but the outcome might have been different had the fight gone five rounds instead of three.

There have been some doubters about the validity of the Brazilian’s wins over Tate and Rousey, two star fighters who have since walked away from the sport to pursue other career opportunities. The question is whether Nunes beat two prime fighters or if she “proved” herself against a pair of fighters who already had one foot out the door. This question will be answered when Nunes takes on an improved Shevchenko in a five-round fight that should be nothing short of a war.

While the aforementioned Jędrzejczyk is undefeated and arguably one of the most popular fighters in any division, Nunes has the wow factor on her side. It’s the same wow factor that Holly Holm had when she shocked the world at UFC 193 and was the first woman to beat Rousey. Nunes has the wow factor, but it’s magnified due to how quickly she got the job done and became the champion.

There is no reason to overlook Nunes. International Fight Week failed to bring us previously hoped-for match-ups of Georges St-Pierre against Michael Bisping and Cody Garbrandt against T.J. Dillashaw, but it will give us another look at Nunes.

Coming out of American Top Team, Nunes has a lot of steam pushing her forward. With plenty of competitors in line to fight for the title, the “Lioness” could create a legacy that is far bigger than simply being “the girl who beat Ronda Rousey in 48 seconds.” This is her time — the Lioness Era, if you will.