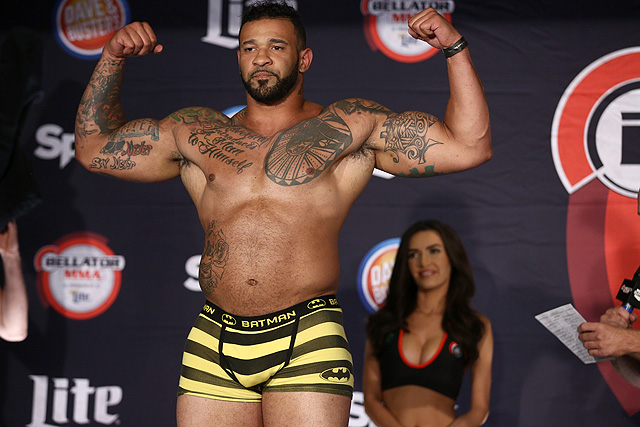 As you walk into the gym where former top MMA prospect Lorenzo Hood spends most of his days, you’re greeted by familiar sights and sounds. Yet, as familiar as the setting is, it manages to feel entirely different.

The sights are the same — Hood still appears to be the hulking heavyweight he always has been.

The sounds are the same — a timer used by his coach, Dennis Verges, echoes through the gym as each round comes to a close.

Even the smell is the same — sweat. While others would be put off by the overwhelming odor, those who are well versed in the sport know it simply means hard work and dedication are present.

The facility is connected to Luiz Claudio’s jiu-jitsu gym next door, but there’s not a gi to be found in this room. There are wrestling mats on one side of the gym; a boxing ring sits on the other. This is where Hood feels at home. Once one of the most touted MMA heavyweight prospects, Hood recently began a transition into the world of boxing.

“I think I’ve always been a boxer doing MMA,” Hood told Combat Press. “It’s something I’ve always been doing. When I was training in MMA, boxing was something I was inspired to do. The biggest change for me was getting a fresh start. I feel like I was injured for the past year and a half. I feel like mentally and physically I got on the same page.”

Hood was on a lot of people’s short lists for rising prospects in the heavyweight division. A natural athlete, he combined the athleticism of a lightweight with the punching power of a heavyweight. With such raw athleticism at a heavyweight’s size, it was easy to see why Hood was on so many people’s radar. After impressing on the local circuits, he earned a debut chance with Bellator MMA. However, a knee injury which occurred during the warm-ups put a halt to Hood’s Bellator debut. It would also signal the beginning of the end for Hood’s time in MMA.

Hood went through a series of minor surgeries to avoid facing an extended absence from the sport. These smaller surgeries would help Hood get through the rigors of daily training, but it was clear he wasn’t the same. After dropping back-to-back fights, Hood was looking to get back on track in a regional promotion. What he found was a new beginning.

“I got to the airport and they hadn’t booked my corner’s tickets before my last MMA fight,” Hood said. “They said they’d fly me out first and then my coaches out later. I was just like, you know what, I’ve had enough of it. MMA has been good to me, but I need to make this change.”

A change in career paths requires the proper support team for anyone, much less a pro fighter. While Hood was clearly over the MMA game, he still needed some guidance to enter the world of prizefighting.

“I was taking a break from everything and healing up,” Hood said of his boxing beginnings. “Some guys came in with a boxer and I did some rounds with him. I impressed them, and they put me in touch with someone and said, ‘Hey, listen, you need to be doing this.’ And here we are, at 5-0.”

The man behind the monster is no stranger to combat-sports fans. Known as “The Bowtie Boss,” Dennis Verges has worked with numerous fighters, including former Bellator champion Will Brooks and current GLORY standout Richard Abraham. Verges has been the one to mold Hood during his transition from MMA fighter to professional boxer.

“I’ve always trained hard. Now I’m training with a different type of intensity and mental focus,” Hood said. “My training goes beyond the mat. I’m training at home and during the few hours away from the gym. I’m always watching and studying boxing. It’s made training fun again. With MMA, I stopped having fun with it. It just became a job. Anything that involves getting hit in the face, you have to love it.”

Part of his studies involves not looking at just other heavyweights, but also at the lighter weight classes. Listing off boxers that he regularly watches or takes inspiration from, Hood laughs about his apparent small-man complex.

“I think I mold myself after the small guys,” Hood said. “I like to do things the small guys do. I love [Vasyl] Lomenchenko and his footwork. I love the way ‘GGG’ [Gennady Golovkin] walks people down. I love the way Canelo [Alvarez] throws his combinations. I love ‘Chocolatito’ [Román González].

“At 275 pounds, if I can mimic what a 135-pound guy can do in a fight, it gives me a little more of an edge. Eventually, you’re going to go against a guy who’s just as big, hits just as hard, and has just as good of technique. So maybe you hit him with some footwork or a move he hasn’t seen from another heavyweight.”

With his coach shouting commands at ringside, Hood maneuvers around the ring in a fashion that’s fitting for someone who enjoys the lighter weight classes. He has to adjust to the movement and pace of a boxing round. It’s nice to try to emulate a lighter-weight fighter, but there’s a reason why most heavyweights aren’t able to do the same things as their smaller peers.

“A big difference is, there’s no resting,” Hood said. “Even when I started, I was like, hey, I used to do five minutes, [so] three minutes is nothing. But that three minutes is non-stop. Even if you’re holding for three seconds, the referee is breaking you up and you’re back to punching.”

Beyond learning that three minutes can be just as exhausting as five, Hood also took some time to adjust to competing against his fellow heavyweights. He admits heavyweight boxers seem to hit harder, but he is also aware that he’s jumping into a talent pool full of fighters who’ve spent extended time on the amateur circuit.

The 6-foot-3 Hood has a certain level of confidence that makes him a natural in the land of the giants. After beginning his boxing run at a local pro card, Hood finds himself on the televised portion of an event just outside of Chicago. The show will be held in Rosemont and shown on CBS Sports Network. Despite being only five fights into his career, Hood was selected to be part of the only three televised matches.

“It’s amazing. It just goes to show the progress I’ve made,” Hood said. “Not just me, but my team and I. It shows what a good team, a healthy mind, a healthy body and sponsors behind you [can do]. I made a post today about having family around you. I feel like it’s boosted my progress. It’s amazing. God is good.”

Some of us don't get to choose our family & by the age of ten I pretty much had none & by age 11 I thought I was being punished for something but that was gods way of bringing me the best family a man could ask for there are some that I couldn't fit into this picture but I wanna thank all of you for your love loyalty and support and will always have your back thank you guys for giving me a reason to fight & a reason to live god is good!! Find the light in the darkness!!!!❤️🙏🏼🙏🏼🙏🏼 @drverges @dutchstyle154 @preinhart77 @dfit68 @yungsiddy @dan_cronin @eddie_dutchboy_lopez @blackbeard.photography

For those tuning in, it may be their first time seeing the former MMA prospect since his switch to boxing. It might not be HBO or Showtime, but don’t tell that to the man in the ring.

“I feel like I left a lot on the table with MMA,” Hood admitted. “You know, getting hurt in that one fight and coming out hurt in the next fight. Fighting on national television is my redemption. Now, I get to show the world what I can do when I’m healthy and my mind is on full focus.”

Hood will have the opportunity to formally reintroduce himself to combat-sports fans as he continues his redemption tour this Friday, June 23. The CBS Sports broadcast begins at 9 p.m. ET and also features local talents like Don “Da Bomb” George and USBA light heavyweight champion Mike Lee.