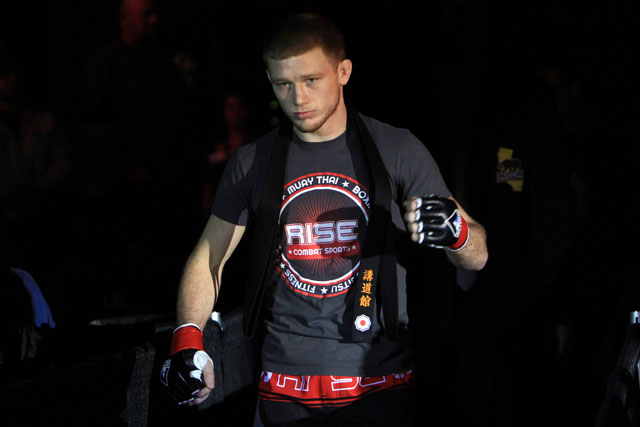 If there is one thing wrestlers and judokas are known for, it is their work ethic. Speak to any adult in his 30’s or 40’s who grew up wrestling at a young age, and every single one will tell you that the best part of growing up in that lifestyle is the work ethic. The grappling arts are not something to take likely. It is dedication. On Friday night, a 26-year-old grappling artist will take the stage at Legacy Fighting Alliance 11, which takes place at the Comerica Theatre in Phoenix.

Casey Kenney has made a life out of grappling. In two and a half decades, that’s about the only thing he has ever known.

“This whole journey started out when I was five years old and I started judo,” Kenney told Combat Press. “I’m now a second degree black belt. I’m a nine-time national champion, and I competed, basically, until I went to college. I also started wrestling at seven or eight years old. That’s how I got into combat sports.

“In high school, I started watching UFC, that kind of stuff, and I fell in love with the sport. Right after high school, I had my first amateur fight. I wasn’t training in mixed martial arts, so I went in there with what I knew, and it ended up working out pretty well for me. After that, I was hooked.”

After his sophomore year of college at the University of Indianapolis in his home state, Kenney, who was 20 at the time, moved to Arizona to chase his dream. College had taken a backseat to fighting, and the Portland, Ind., native decided it was time to take his passion to the next level.

“I have an aunt and uncle out here, and they told me I had a place to stay until I got my own place and got settled in,” Kenney explained. “I looked around at what was out here, and I liked what I saw for training in mixed martial arts. So, I booked my flight and packed my bags and haven’t looked back.”

Kenney is currently training under UFC vet Chris Cariaso at Rise Combat Sports. He has a nice stable of training partners, including guys like Joe Madrid, Ed West and Arturo Guzman. He couldn’t be happier. He remains undefeated as both an amateur and professional fighter, and his current pro record is 6-0. His last fight was over a tough veteran, and he came out with an early win.

“I fought Alvin [Cacdac] for the Tachi Palace flyweight belt,” said Kenney. “He fought numerous guys, including my coach, Chris. He’s fought numerous guys who have made it to the top level — Bryan Caraway, Louis Smolka and guys like that. He was a tough opponent, and he came out ready to fight. That’s for sure. He made one little mistake, and I capitalized on it.”

With less than two minutes left in round one, Cacdac shot in on Kenney, which was a big mistake against such a high-level grappler. Before either guy knew what had happened, Cacdac was caught in a nasty rear-naked choke and the fight was over. LFA 11 will be the next evolution in Kenney’s career, and his next opponent will be Brazilian grappler Bruno Silva.

“Bruno is going to be a tough fight,” Kenney admitted. “I know he was on The Ultimate Fighter: Brazil. He comes out tough, and he’s a pro. He’s a Brazilian Jiu-Jitsu black belt, but there’s nothing that he’s going to bring for me that has me worried at all — not a bit. I’m going to be one step ahead of him everywhere. They say he’s really solid and well rounded, but I think I’m going to beat him to the punch on our strikes and our feet, dictate the takedown game, and, even with his BJJ black belt, you may even see another submission in there as well.”

Silva is currently 9-3 as a pro, but after his loss on TUF Brazil 4 over two years ago, he’s been fairly inactive, fighting only twice, and losing his last fight by a seven-second knockout in September. He is definitely walking into a whirlwind of momentum when he faces Kenney, who is still riding a path of destruction.

“I think I’m still going to be undefeated for a while,” Kenney said. “I have a great work ethic. I’m constantly working, constantly improving. If you’re not doing that in this game, you’re going to be a step behind. I just think I’m going to be a problem for anybody — even top-five guys in the UFC I’ve got my eyes on, and I think I can do damage to them as well. I think the world is going to be shocked when they start recognizing Casey Kenney in the flyweight division.”

Kenney’s work ethic is nothing to be overlooked. Sure, a lot of guys claim to work very hard, but Kenney doesn’t have a job outside of the gym. His life completely revolves around fighting, just as it has for 20 years. Nobody can challenge the work ethic of a lifelong wrestler and judo national champion.

“I’m an explosive fighter,” said Kenney. “I’m coming forward all the time, and I’m trying to hurt people. I’m not out there scoring points, and I’m not looking for a decision. I’m trying to knock people out, or, if we go to the ground, I’m trying to finish people on the ground as well. I’m going to bring some things to the table that you don’t see in the flyweight division a whole lot.”

Kenney would like to thank Rise Combat Sports, Chris Cariaso, his coaches, his training partners, Iridium Sports Agency and everyone in Arizona and Indiana who have helped him on his journey. Follow Casey on Twitter: @ckmma125
Advertisement