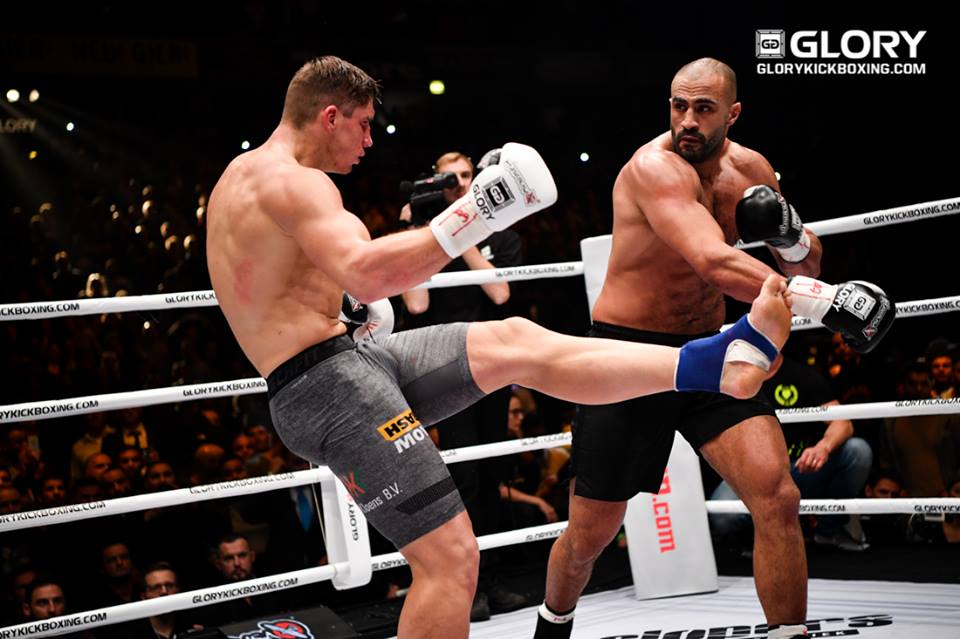 Event of the Year – GLORY: Collision

The best kickboxing event in 2016 could certainly be debated, but there was one event that was talked about and promoted above any other event around the world. GLORY: Collison was the biggest fight card GLORY produced since its previous pay-per-view effort, 2014’s Last Man Standing. The event largely focused on the heavyweight main attraction between GLORY champion Rico Verhoeven and debuting K-1 legend Badr Hari. However, the 11-fight card featured three world title fights, two one-night tournaments and a plethora of kickboxing talent. The hype surrounding this event played a major factor in the event claiming this award. This is not to say that it wasn’t a tremendous event, but this year was exceptionally good for many of the high-level kickboxing promotions across the globe.

The event of the year took place on Saturday, Dec. 10, at the König Pilsener Arena in Oberhausen, Germany. The stacked fight card featured three separate broadcasts, including the GLORY 36 Super Fight Series on UFC Fight Pass, GLORY 36 on the ESPN networks, and GLORY: Collision available through pay-per-view on UFC Fight Pass. The promotion wanted to showcase its rising star, Verhoeven, against one of the most popular K-1 fighters of the past decade. Verhoeven’s record featured a who’s who of ranked heavyweights, but there were still a few names outside of the promotion that could potentially test Verhoeven’s lengthy win streak. Hari, one of the most popular kickboxers in the world, was at the top of the list.

Verhoeven knocked off top heavyweights Daniel Ghiță and Gökhan Saki in GLORY before losing to Andrei Gerasimchuk outside of the promotion. Despite the loss to Gerasimchuk, Verhoeven’s stock as heavyweight champion didn’t falter. He continued winning inside of the GLORY ring, where he earned big victories over current or former top-10 heavyweights Errol Zimmerman, Anderson Silva, Mladen Brestovac and Benjamin Adegbuyi (twice).

During Verhoeven’s streak, Hari battled lawsuits and canceled fights, but he still found a way to victory in his few sporadic fights. Hari returned to the top 10 with a third-round knockout of ranked heavyweight Ismael Londt in 2015, but the hype for a another big fight featuring the Moroccan heavyweight didn’t come to fruition until GLORY came calling in 2016.

The theme surrounding the heavyweight main attraction was different for Verhoeven and Hari. The long-reigning champion had his sights on big-name opponents, whereas Hari wanted big-money fights. The showdown was both a big-money fight and a competitive match-up of top heavyweights. The press behind the event kept building. GLORY and Verhoeven, potentially risked their star-studded main event when Verhoeven fought the dangerous former top-10 heavyweight Anderson “Braddock” Silva at GLORY 33 before his scheduled bout with Hari. The anticipation for the event continued to build when Verhoeven easily dispatched of Silva in under two rounds.

As the event transpired, the energy grew exponentially as the heavyweight giants walked to the ring. The fight between Verhoeven and Hari was intense from the opening bell. One mistake from either man could have signaled the end. The tension grew as the men began picking up the intensity of their exchanges. The fight ended in an instant, but not how the fans would have wished. Hari pulled up from a brief exchange in favor of his right arm. The subsequent count ended with Hari unable to continue due to an unfortunate injury. The fighters exchanged words following the decision, again building hype for what could be another blockbuster event in the future.

The main event might have ended anti-climatically, but the rest of the card featured title bouts, big knockouts and ferocious fights.

The Super Fight Series kicked off with a lightweight contender tournament featuring Dylan Salvador, Anatoly Moiseev, Hysni Beqiri and Antonio Gomez. Salvador edged Moiseev and Beqiri toppled Gomez in the semifinals before they crossed paths in the final. Salvador’s technical prowess led him to victory and a third fight with GLORY lightweight champion Sittichai Sitsongpeenong. Speaking of Sittichai, he defeated top-10 kickboxer Marat Grigorian for a third time — and for the first time in a five-round title fight.

GLORY 36 featured the semifinals of the eight-woman tournament to crown the inaugural women’s super bantamweight champion. Former Lion Fight champion Tiffany van Soest took on Canada’s Jessica Gladstone in one semifinal, while France’s Amel Dehby conquered the Netherland’s Isis Verbeek in the other.

The GLORY women’s super bantamweight tournament final opened the pay-per-view. The aforementioned van Soest proved she could perform just as well under kickboxing rules. She took a unanimous decision over the previously unbeaten Dehby.

Jamal Ben Saddik shocked GLORY’s No.1 heavyweight contender with a dominant decision victory. The massive win for the Moroccan-Belgian earned his return to the heavyweight top 10.

Cedric Doumbé capped off his spectacular year with a victory over untouchable GLORY welterweight champion and undefeated boxing champ Nieky Holzken. France’s Doumbé did enough to unseat the undisputed welterweight king in what became the victory that earned him “Fighter of the Year” honors in 2016.