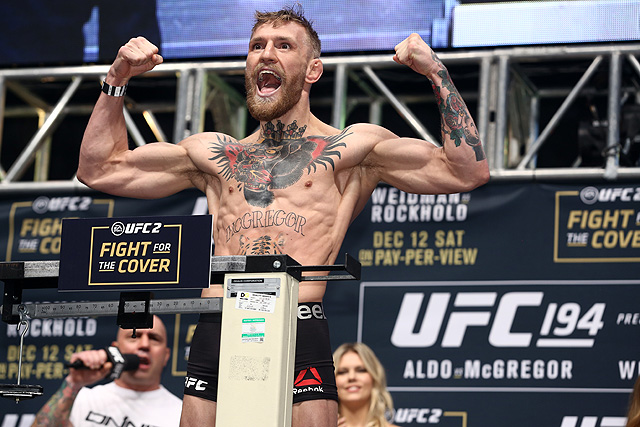 On Saturday, Nov. 12, the UFC will make its long-awaited debut in New York as it hosts UFC 205: Alvarez vs. McGregor from Madison Square Garden in New York City.

The event will be headlined by three title fights. In the top-billing, lightweight champion Eddie Alvarez looks to make the first defense of his belt against featherweight kingpin Conor McGregor. Alvarez, a former Bellator MMA titleholder, took the belt away from Brazilian Rafael dos Anjos in July with a first-round TKO finish. McGregor, meanwhile, has never defended the 145-pound title. The Irishman split a pair of welterweight bouts with Nate Diaz earlier this year and will now look to hold two belts simultaneously.

In the night’s co-main event, another recently crowned champion, Tyron Woodley, puts his title on the line for the first time against striking stalwart Stephen “Wonderboy” Thompson.

The remainder of the card is littered with former champions from multiple divisions, including Chris Weidman, Frankie Edgar and Miesha Tate.

# – Alves missed the 156-pound limit and was fined 20 percent of his purse. New York requires fighters to weigh-in within five pounds of one another, so Miller put on additional weight and was not fined.