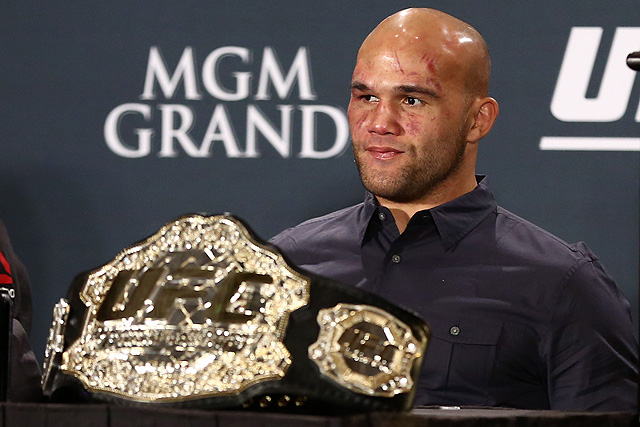 For years, the UFC has been known for its great matchmaking. The promotion has paired fighters against one another in ways that entertain the fans and please the executives at the top.

Now, think of a fighter who transcends the role of a true brawler. Think of someone who has the technical ability to stand toe-to-toe with basically any opponent. Did Robbie Lawler’s name come to mind? It should. This is a fighter that has truly been on a roller coaster.

Once upon a time, he was young and inexperienced. He went through the ups and downs of what it means to be a fighter who just wanted to fight, while not really having the true foundation of a camp that dedicated their time to him. That’s not to suggest that Lawler’s time at Miletich Fighting Systems, with greats like Matt Hughes, Tim Sylvia, Jens Pulver and others, weren’t helpful toward making him a great fighter, but many people know that Lawler’s true abilities came to fruition shortly before his return to the UFC.

When Lawler had his first UFC stint between 2002 and 2004, he was a kid that was known to have extremely high potential to be an amazing fighter, as long as he was able to put all his skills together. Unfortunately, that didn’t happen. Lawler was still in his early 20s and hadn’t really created a foundation for himself yet. He was essentially a raw talent that was ready to be molded into a champion, but he didn’t really have anyone to take him to that next step.

That process took a while for the young San Diego native. He spent the beginning of his UFC career knocking out guys left and right, then hit a pretty bad rough patch, losing to more experienced fighters like Nick Diaz and Evan Tanner. His first run in the UFC ended fairly abruptly.

For the next nine years, Lawler bounced around several different organizations, including Pride, the IFL and EliteXC. He even captured a championship with the latter of these organizations. That led to his entrance into the most successful fighting period of his career prior to his current stint with the UFC. Lawler joined Strikeforce, where he finally got the opportunity to fight highly ranked competition almost equal to what existed in the UFC. He posted a somewhat misleading record of 3-5, but he had some highlight-reel moments and all three of his wins ended by knockout or TKO.

Lawler, even all those years later, still had the incredible ability to just put people away at will. He still had some losses, too. Out of his five losses under the Strikeforce banner, two were via submission and three came by decision. He had still only lost via knockout one time in his career, when he faced the aforementioned Diaz in the UFC in 2004. Even so, he still wasn’t satisfied with the results he was getting from his performances. That’s when Lawler decided to switch camps and join American Top Team.

Lawler joined ATT in 2012, leading up to his second stint in the UFC, where he would take on longtime contender Josh Koscheck. His move to American Top Team definitely proved to be a complete rejuvenation for the knockout sensation. He rattled off back-to-back knockouts over Koscheck and veteran Bobby Voelker. Incredibly, his second UFC stint had begun just like his first, with Lawler putting away opponents and not appearing to miss a beat. His next fight was a decision win over Rory MacDonald, which set up a title challenge against Johny Hendricks, the reigning UFC welterweight champion at the time, at UFC 171.

The Hendricks fight didn’t go Lawler’s way. He lost a razor-thin unanimous decision for the vacant UFC crown, with all three judges giving three of the rounds to Hendricks and two rounds to Lawler. On a positive note, the fight was named the UFC’s 2014 “Fight of the Year.”

After the loss, Lawler went on another two-fight winning streak, this time knocking out Jake Ellenberger and beating Matt Brown via unanimous decision. This set up a rematch with Lawler’s foe, Hendricks. They met again less than nine months after their first bout. In the second fight, which also went to a decision, the judges had it as a fairly close split verdict. This time, however, the scores read in favor of Lawler, who had finally secured the UFC welterweight championship.

Since then, Lawler has won two fights, running his winning streak to five. His rematch with the aforementioned MacDonald at UFC 189 was one of the best fights in UFC history — it was voted as UFC’s 2015 “Fight of the Year,” which gave Lawler the award for two years running. After his first successful defense, Lawler took on longtime contender Carlos Condit. Lawler retained his championship with another close and controversial decision.

All this success for Lawler has led up to another important match-up, this time with fellow former Strikeforce contender, Lawler’s American Top Team teammate Tyron Woodley. They will clash at UFC 201 in Atlanta.

While Lawler has had a ton of great fights in his career, there is one fighter that has yet to really be mentioned as a serious challenger to his championship. That man is Stephen “Wonderboy” Thompson.

Not only does Thompson have a fifth-degree black belt in Kempo karate, but he also holds a first-degree black belt in ju-jitsu and a black belt in kickboxing. As a kickboxer, he has a record of a 57-0 (with 40 knockouts) and became a 13-time middleweight and light heavyweight world champion at the amateur level. That’s a pretty good resume for a guy whose dad was also a world-renowned kickboxer.

Since joining the UFC, Thompson’s only loss came to veteran Matt Brown, who defeated the striker pretty decisively in a three-round battle in 2012. Five of Thompson’s nine fights in the UFC have resulted in knockout or TKO wins for the fighter. He landed a sneaky head kick against Dan Stittgen and a spinning heel kick against the aforementioned Ellenberger. Impressive doesn’t even begin to explain this kid.

So, what would a fight between Lawler and Thompson entail? Just imagine two fighters in their prime, who have extremely potent and unique striking abilities, facing each other. One guy likes to bite down on his mouth piece and throw down. The other guy likes to use sneaky and crafty technique to knock opponents out with a shot they never see coming. This is Lawler vs. Thompson in a nutshell.

If that’s not seen as a major test for a valiant champion, as it would be Lawler, then what could be? It would also test Thompson’s durability in putting up with a fighter who constantly moves forward like Terminator and never gives up until the final bell rings. Anyone who saw Lawler’s second fight with MacDonald knows about his incredible toughness.

It should also be noted that, while these fighters are still in their prime, they’re certainly in the later portion of their fighting prime. Lawler just turned 34 and Thompson just turned 33 earlier this year. The time is now — or, at least, very, very soon — for these two incredible strikers. One just has to hope that UFC President Dana White and company will pull the trigger sooner rather than later.

So, while Woodley is worthy of the next welterweight title shot, the fight we’re really waiting for pits Lawler against Thompson. It would be yet another great piece of matchmaking on the part of the UFC.