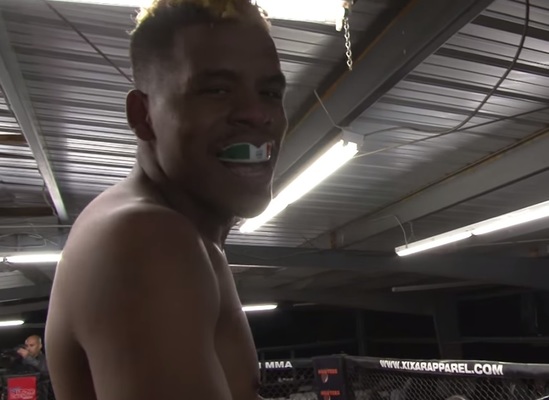 Taco Bell does not serve tacos — plain and simple. Anyone who gets confused about this needs to find a local taco truck, order up some steak, tongue and/or cheek tacos. There are telltale signs that the truck is legit. The tortillas are always soft corn, the sauce is homemade, and the standard onion-cilantro mix is the only garnish necessary. Of course, the customary pickled jalapeno and Mexican Coke from the ice bin are must-haves, as well. Taco Bell does not serve tacos — period.

Twenty-year-old Chris “Taco” Padilla knows a thing or two about tacos. Growing up in Gardena, Calif., he saw the full gamut of tacos, from the absolute best to the unbelievably worst. His affinity for tacos garnered him this moniker several years ago.

“When I was a freshman in high school, we went through the whole taco phase, where everything was tacos, tacos, tacos,” Padilla told Combat Press. “We ate tacos all the time, drew tacos everywhere, wore shorts that said ‘I love tacos,’ and it was a taco craze for us. I made myself a Facebook page that said ‘Christopher Taco,’ because I was the taco man. I tried to change the name, and everyone told me I couldn’t do that, because I’m the taco man. I’ve been ‘Taco’ from then on.”

Prior to the taco phenomenon, Padilla began on a journey to build another name for himself in the world of mixed martial arts. As a young teenager, he tried a few different sports, but MMA was what hooked him, well before he was old enough to drive.

“I got into MMA when I was 13,” Padilla said. “I found a flier when I went to drop my brother off, and the gym was in my hometown of Gardena. I showed up, got beat up, and from then on, I couldn’t get enough of it. I trained from when I was 13 until now. The first fight I ever watched was Chris Leben versus Terry Martin, and I watched Chris Leben get hit really hard until he came back and knocked Terry Martin out.”

Padilla is currently undefeated, has only been to decision once, and his other six pro fights finished in three knockouts and three submissions. His amateur career was much of the same, with three additional knockouts and three additional submissions. In his 13-fight, combined pro and amateur career, he has only been out of the first round three times. Much like Leben, Padilla is a finisher.

“My first MMA fight, they said the rules changed and we had to wear headgear and could only throw body shots,” Padilla explained. “I ended up knocking the kid out in like 39 seconds with body shots. From then on, the finishes kept coming.”

That first fight was only three and a half years ago, and the taco connoisseur has never looked back, nor does he intend to.

Padilla’s last fight, which took place in December, was his first under the Resurrection Fighting Alliance banner. He was able to tap out Mike Segura in under five minutes. After six months, he will be back in the cage tonight at RFA 38, live from The Hangar at the OC Fair & Event Center, for his eighth professional outing. Standing across the cage will be Jason Gonzalez, who is on a five-fight winning streak of his own. All five of those wins have come by finish.

“I know he’s a good striker, and he’s a tall guy with good submissions,” Padilla said. “He’s like a lot of my previous opponents. He’s the same opponent as my last opponent. It’s not disrespect. They’re both tall, good strikers [and] good off their backs. We’re going to test his striking, and we’re going to test him off his back.

“My coach always told me, ‘You can win fights and you can be a champion. It’s all just work now. Just come to the classes, do what I tell you to do, and you’re going to get better at it.’ I just listened to him, because I don’t like to lose, man. I know that, win or lose, my family understands it’s the nature of the game, but in my mind, I can’t lose.”

Padilla feels that he has the best coaching he can get at Systems Training Center in Hawthorne, Calif. Between his four main coaches and teammates like Christos Giagos and Terrion Ware, he has all the tools he needs, but there’s only so much a support system can do. A fighter needs to be mentally prepared as well. Padilla’s mentality is solid.

“I’m undefeated, because I don’t let anyone beat me,” Padilla said. “I just get in there and get after it. I’m not a guy that goes in there to just play around with fighters. I just go in there and I maul ‘em, man. A lot of fighters want to take their time and get their groove on. I know why I’m in there, so I’m in my groove already.”

One of Padilla’s main training partners is one of his four siblings. When the brothers Padilla are not busy getting ready to maul some opponents, there’s always time to maul some tacos.

“My brother Christian is a fighter too,” Padilla said. “He’s fought on a few of the same cards as I have. His favorite taco would have to be asada [steak].

“My favorite taco is lengua [tongue]. I love every taco, but when I sit down, I need to order four or five of those. It’s all about the tortilla, the meat, the price. If they put something weird on it, like cheese, then I know it’s not a real taco. I grew up going to taco stands and vans, where you show up, get your tacos, you put onions, cilantro, but I’ve never seen the option for cheese. It’s all about the meat. It needs to be savory, and if it’s too chewy, there’s something wrong with it.”

The resemblance of Padilla’s fight game to his love for tacos is uncanny. When the young fighter steps into the cage, there is no cheese and there’s nothing chewy. It’s simple, savory and to the point, just like a good taco should be. Win or lose, tonight at RFA 38, his opponent is going to get a taste of one great taco.

“After I win, give me a title shot. Give me whoever wins [tonight]. Give me a title or get me in the UFC. Anything other than that, I don’t really care much for. Anytime you watch me, it’s going to be a finish. Give me one round. He’s going down or I’m going down.”

Chris would like to thank God, his coaches, teammates, family, friends, and fans. He would also like to thank his sponsors: Slick and Nasty, Scrap Soldier, Persuasive MMA and Tacos al Gusto. Follow Padilla on Twitter: @ChrisWarTaco
Advertisement