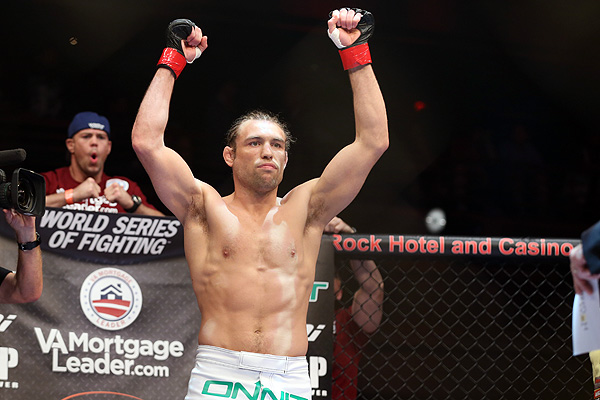 The first time Carl won a world title, he did so in the state of Florida. Now, he’s slated to compete once again in the Sunshine State with a title on the line.

Carl, whose record sits at 22-4, will face undefeated eight-fight veteran Belal Muhammad for the inaugural Titan Fighting Championship welterweight title at Titan FC 38 on Saturday, April 30, in Miami. The last time Carl competed for a championship in Florida, he defeated fellow veteran and current UFC lightweight Josh Burkman by triangle choke to win the World Series of Fighting welterweight crown in 2013.

However, Carl’s reign would be short-lived. He was submitted in the first round by UFC veteran Rousimar Palhares for the belt just five months later.

“I wanted to get in his face and pressure him,” Carl told Combat Press. “He doesn’t really want to fight and is a little timid. He just wants to get your leg and go home.”

Palhares was stripped of his title and received an indefinite suspension from the WSOF last year and also received a two-year suspension from the Nevada State Athletic Commission after refusing to let go of a submission hold on Jake Shields after Shields tapped to Palhares at WSOF 22 in August. Palhares also eye-gouged Shields during the fight, but he was not punished for that infraction by the NSAC.

“I know when someone’s getting ready to tap, and he should know that too,” Carl said of Palhares’ actions during the fight against Shields.

In addition to the WSOF, Carl also competed for Bellator MMA in 2010 and 2011. He split his four fights for the organization. While he acknowledged that Bellator, the WSOF and the UFC all present a different product to fight fans and promote fighters differently, Carl likes Bellator’s approach to promoting its fighters.

“The UFC doesn’t promote their fighters as well, because they have so many,” Carl said. “Everyone talks about Ronda [Rousey] and Conor [McGregor], but anyone can be a star there with hype behind them.”

Carl also credits Bellator for putting on fight cards that draw eyeballs, even when those cards feature controversial bouts like Kimbo Slice against Ken Shamrock and Dada 5000 or Shamrock facing Royce Gracie.

“They’re putting on fights that fans want to see,” Carl said of Bellator.

Carl also briefly competed for the UFC as part of season 21 of The Ultimate Fighter. The season featured fighters from American Top Team competing head-to-head against fighters from the Blackzilians. Whereas other seasons of the show feature fighters competing for a UFC contract, Carl’s season focused on the rivalry between the two gyms and had its fighters competing for cash prizes, although some fighters who competed on the show still signed UFC contracts.

Carl actually joined American Top Team right before filming of the show began and would have preferred to compete for a contract instead of taking part in a gym-vs.-gym competition.

“I thought it would have been better for me, because I was thrown into a bunch of drama,” Carl said. “I had no backstory.”

However, while the animosity between American Top Team co-founder Dan Lambert and Blackzilians owner Glenn Robinson that was highlighted during The Ultimate Fighter was seen as legitimate, the fighters from both teams conducted themselves as professionals and aren’t the hated rivals they may have been portrayed as on the show.

“I hung out after the show with guys from ATT and the Blackzilians,” Carl said, adding that he still trains with American Top Team. “It’s like seeing an old buddy.”

Carl doesn’t believe in changing up his strategy for his welterweight title fight with Muhammad at Titan FC 38. He described his opponent as having “good cardio” and being “a good striker, but he’s not much of a finisher.”

Of Carl’s 22 overall wins, 17 have come by way of submission. He attributes his success in that area to pressure.

“It’s the key to everything,” he said. “If you want to finish the fight, it’s harder to get the knockout.”

With more than a decade of experience as a professional fighter, Carl is looking forward to putting another notch on his belt by winning the Titan FC welterweight title and aiming for a possible return to the UFC.

“I never planned to fight,” Carl said. “I started doing MMA because I wanted to gain confidence. I joined a gym and two months later, I stood in the cage for my first fight.”