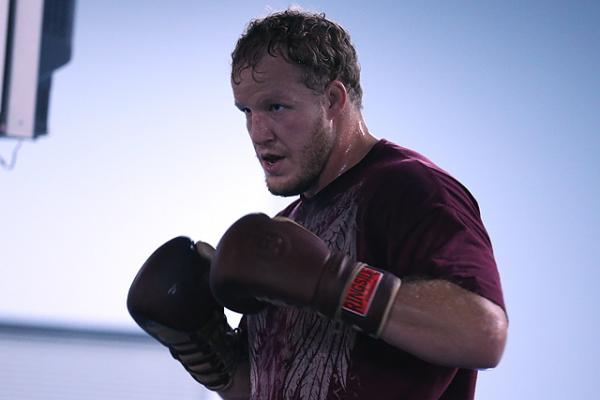 Jared Rosholt’s UFC Career: A Microcosm of How To Lose Fans

Many MMA careers come to an end when a fighter has lost multiple bouts in a row, probably because they’re getting too old or their drive to train every day and their willingness to take punches to the head has just stopped. A lot of these fighters choose to retire and gain back a calm life.

Then, there are those fighters who, despite their skills, just can’t put on performances that people are willing to watch.

Late last month, the UFC heavyweight veteran was released by the UFC following a loss on Feb. 6 at UFC Fight Night 82.

Rosholt came out on the wrong end of a unanimous decision against Roy Nelson. The scorecards were pretty decisive in favor of the hard-hitting The Ultimate Fighter winner in a battle that served as the co-headliner of the evening. It was disappointing, to say the least. . The UFC brass felt this was enough of a reason to let Rosholt go, even though it was only his second loss in the UFC and third loss overall. Through eight bouts with the promotion, Rosholt had gone 6-2, with the other loss coming via knockout against Oleksiy Oliynyk on Nov. 22, 2014, in his home state of Texas. Rosholt never even managed to get any extra bonuses for a great individual performance or an eventful fight.

Before his UFC debut in November 2013, Rosholt, a member of the renowned Team Takedown that had produced former UFC champion Johny Hendricks and is headed by the well-respected coach Marc Laimon, had amassed a near-perfect record of 8-1 fighting with various promotions, including as Legacy and Titan FC. Three of his wins had come by some form of knockout, three more by submission and the other two by decision. His only loss was a knockout to current UFC heavyweight juggernaut Derrick “The Black Beast” Lewis in a bout for the Legacy FC heavyweight title in 2012.

With all that success prior to making it to the big show, Rosholt seemed like a no-brainer signing for the UFC, where he could compete with the best fighters in the world. On Sept. 18, 2013, Rosholt got the call so many fighters dream bout. He signed with the UFC and set up his first fight for November of the same year.

Just over two relatively active years and eight uneventful fights later — five of which were on the main card — Rosholt appears to be back at square one. Keep in mind, he’s not even 30 years old yet. For many fighters, this is the point of their career when they have reached their prime and are setting themselves up for the most successful period of their careers. This is not so much the case for Rosholt. Instead, he’s suddenly on the outside looking in. He has a relatively decent resume, but not too much notoriety to prompt other promotions to jump at the chance to sign him.

Ultimately, this is probably the best thing that could happen to Rosholt, but only if he takes advantage of it to broaden his skills and add more tools to his game so he can seem more appealing to the next promotion that signs him. There’s no doubt he’ll get signed by someone very soon, but the question is whether people will want to watch him. Who knows, maybe he’ll even get re-signed by the UFC in the future.

Overall, the majority of UFC fans who have watched him will either be happy about the news of him being released, or they will respond by asking, “Jared Rosholt? Who’s that?”

Rosholt never really left a good impression on fans. Many of his fights prompted boos and jeers at some point or another. He was on a great team, with great coaches and training partners, and he was more than capable of winning a fight, but Rosholt failed to leave a mark on the minds of the people that watched his fights.

To many fans, a Rosholt fight meant it was probably a good time to run out to pick up some snacks and a 12-pack of beer before the next fight. His performances were viewed as a snooze fest. Plain and simple. I’m sure UFC President Dana White and matchmaker Joe Silva were absolutely chomping at the bit for him to finally lose a fight, just so they could have a legitimate reason to get rid of him. It might have been a day of celebration in Vegas at the UFC headquarters.

Of course, this is said mostly as tongue-in-cheek analysis. It’s doubtful that anybody with the UFC had a dislike for Rosholt, or that White and Silva were actively hoping for a Rosholt loss just so they could release him. The UFC knew what it was getting into with every fight the company put Rosholt in. It’s partly the UFC’s fault for signing him, but it ultimately comes down to the fighter to perform. Rosholt didn’t.

The UFC needs to put on quality fights, not just deliver fighters that will pull off decision wins by laying on top of an opponent and landing pitty-pat shots that barely leave a mark. That’s no disrespect to collegiate wrestlers like Rosholt, who wrestled at Oklahoma State and compiled a 125-27 record. He wasn’t one of those fighters that was able to put everything together and wow the fans. Other fighters who wrestled collegiality have shown to be much more capable of putting on good fights. Some didn’t even wrestle at a top NCAA Division I program, or wrestle at all, but they could still implement a great game plan every fight and be successful. Rosholt just wasn’t one of them.

This situation could be good for Rosholt, as long as he makes the best out of it. Plenty of fighters get released, evolve into better fighters and come back to make a name for themselves. Will one of them be Jared Rosholt? We’ll see.