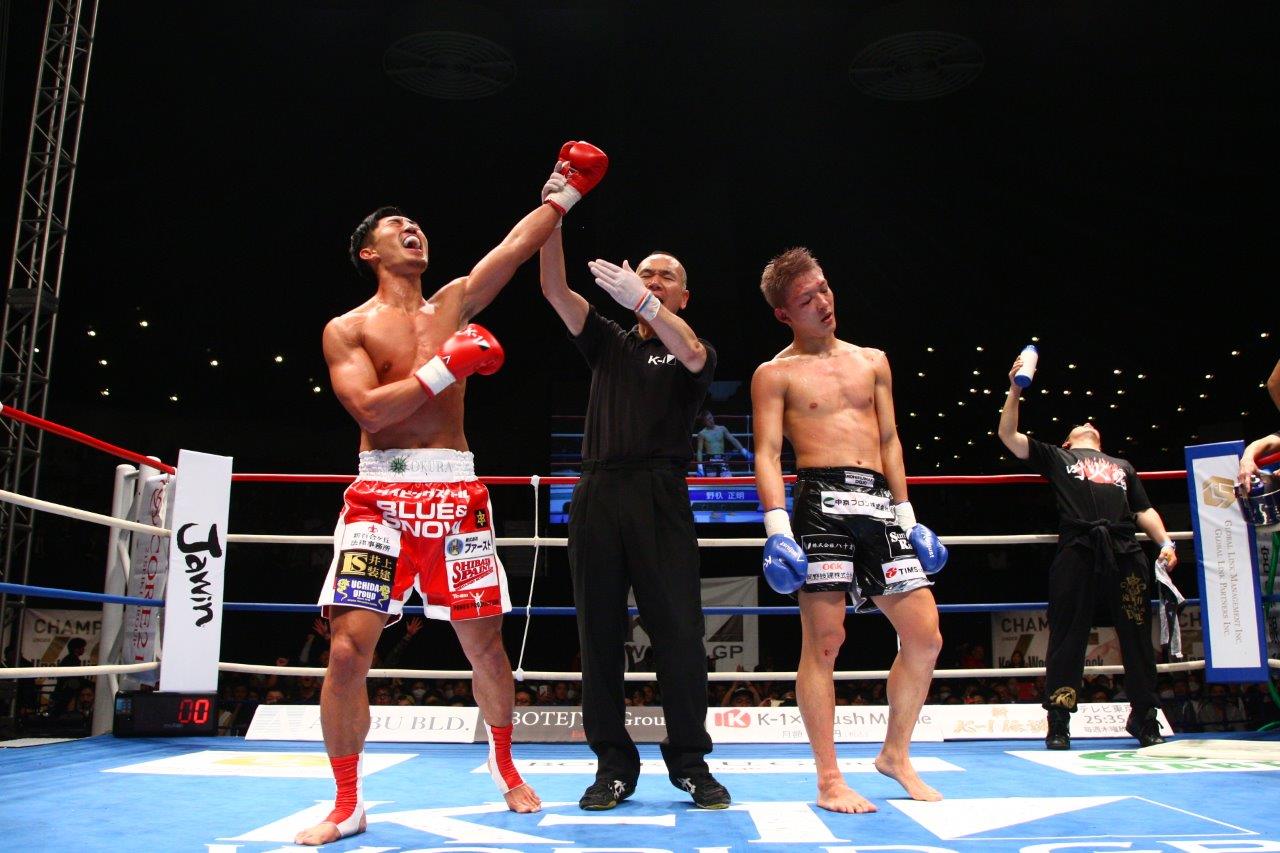 K-1 returned to the Yoyogi National Gymnasium in Tokyo for the promotion’s first event of the year, the K-1 World GP 2016 65-Kilogram Japan tournament. The venue was overflowing with fans — 4,800 extra fans to be exact — all crammed into the arena to watch two champions and the exciting Japan 65-kilogram tournament.

The main attraction of the evening was the one-night, eight-man tournament. The stakes were high, as the winner of the tournament would automatically be placed in the 65-kilogram tournament later this year. The tourney featured the upper echelon of the featherweight division and a plethora of former KRUSH champions trying to make a splash inside the K-1 ring. This event could only be described as kickboxing at its highest level.

In the opening quarterfinal fight, top-five featherweights Masaaki Noiri and Kimura “Philip” Minoru were matched against each other. The winner would become the sure favorite to win the entire tournament. Minoru came out cautious against the technically skilled Noiri. Noiri was able to keep him at range with inside low kicks and a snapping left high kick. The fighters started to pick it up as the round was coming to a close and then Noiri launched a high right knee that dropped Minoru. The tough Japanese-Brazilian striker stood back up, but Noiri was insistent that the fight end in the first frame. Noiri slammed knee after knee and punch after punch into the body of Minoru, who was trying to do everything he could to stay alive against the ropes. Noiri put the final shot into Kimura’s stomach, forcing the referee to immediately call an end to the bout.

Ever-popular K-1 Koshien veteran Hiroya took on former KRUSH 65-kilogram champion Naoki Terasaki. Terasaki looked to close distance early, but Hiroya made excellent use of his footwork and right low kicks. Terasaki tried to sustain his aggression without getting caught, but he lunged in with a punch late in the first round and Hiroya met him with one of his own. Hiroya threw a right cross that put Terasaki down and out of the fight in the final minute of the first round. With the victory, Hiroya moved on to the semifinals to face Noiri.

Inaugural K-1 World GP 65-kilogram championship tournament runner-up Yasuomi Soda took on KRUSH two-division world champion Hideaki Yamazaki. The two fighters began to trade hooks immediately. Soda pressured forward to close the distance, but Yamazaki met him with a left hook and right straight. Yamazaki threw a spinning back kick to the body that hurt Soda, sending him backward while Yamazaki continued forward with punches. Soda made it out of the situation and started to fight back. He put Yamazaki against the ropes, but the skilled Soda couldn’t find a home for his punches. Yamazaki evaded against the ropes and answered by finishing Soda in the second frame..

Longtime K-1 veteran Yuta Kubo re-entered K-1 for a chance to compete in this year’s 65-kilogram tournament. Kubo met former KRUSH 65-kilogram champion Noman in the quarterfinals. The fighters battled back and forth throughout the fight. Kubo started heavy with his left side attacks, throwing his left hook and kicks on frequent occasions. Kubo picked up the pressure in the second frame, landing his left middle kick and pressing forward throughout the round. Noman tried to counter with his strong right hand, but Kubo’s pressure was too much for Noman. Noman came back strong in the third round, though, and landed his right kick to the body and his left kick to the legs. He continued with his kicking attack to keep Kubo at bay. Kubo continued forward and the fight ended with the men fighting in close quarters. Kubo’s hand was raised after the close fight, moving him on to the semifinals against Yamazaki.

Noiri battled back and forth with Hiroya in an exciting semifinal match-up. Hiroya looked to establish his jab, while Noiri remained constant with his counter striking. Noiri showcased his diversity by throwing his knees to the body and head to change the range at which the fight took place. Noiri put it on Hiroya in the second round with his knees, kicks and punching combinations. Hiroya had to dig deep to fight back late in the round, throwing everything he had as Noiri continued to throw heavy knees and hooks. Hiroya pressured heavy in the final frame, pushing forward with a strong series of right hands that hurt Noiri. The shot turned the fight in the favor of Hiroya. Hiroya kept throwing his right hand and his kicks, forcing Noiri to switch his stance to avoid punishment. The young fighters continued to trade shots until the final bell. Noiri took the majority decision to move on to the finals.

Kubo started off quickly in his semifinal bout with Yamazaki, putting the former two-division champion down with a short right hook late in the first round. Yamazaki recovered, but he was out of the fight until about halfway through the second stanza. Kubo pushed forward with his offense, but Yamazaki started to fight his way back into the fight. He landed a left and right combination that got the audience back into the fight. Yamazaki came out strong in the third round, catching Kubo with his own right hand. The fight looked as though it was headed to the judges’ scorecards, but a Yamazaki kick put an end to the contest with just three seconds left in the third frame. Yamazaki surprised another top-10 fighter on his way to the finals against Noiri.

In the finals of the tournament, Noiri and Yamazaki continued right where they left off in their last bouts. Yamazaki impressed in the first round with an abundant kicking attack. He threw spinning back kicks and many other high-level kicking techniques to keep Noiri outside and unable to land his own offense. Noiri picked up his pace in the second, but Yamazaki moved well and attacked with his right hand and low kick. Yamazaki kept his jab flying at Noiri throughout the round. Noiri got the better of the exchanges late in the second frame, though. Noiri really turned it on in the final frame, fighting through the kicks and working his own kicks and punches from within punching range. Noiri pushed Yamazaki to the brink, cutting him late in the fight, but it was a case of too little, too late. Yamazaki had his hand raised after the three-round fight to win the tournament, much to the surprise of many people. Yamazaki improved his record to 26-4, and he added two more knockouts during the tournament to improve his total to 14.

In the card’s superfight action, K-1 World GP 60-kilogram champion Urabe fought multiple-time world champion Johannes Wolf, who has 28 knockouts in 41 career wins. The 27-year-old Wolf fought his fight throughout the three rounds. The German used his array of flashy kicks from his karate background to keep Urabe out of punching range. Wolf used his side kick to throw Urabe out of his rhythm and to set up his own right hand, which worked without flaw for much of the fight. Urabe’s toughness kept him pressing forward, but Wolf earned the judges’ scorecards and the upset win.

K-1 65-kilogram champion Kaew Fairtex fought Dutch kickboxer Massaro Glunder. Fairtex was coming off a win over Minoru in November. After multiple setbacks, Glunder had finally started another winning streak in October. Fairtex used his left clinch and left side attacks from the southpaw position to keep the much taller Glunder at bay. Glunder was sharp in the early rounds, but Fairtex took over with superior inside fighting late in the affair. Fairtex won the decision, earning his 135th career win, but the victory was not without argument from Glunder and Mike’s Gym.

Former RISE heavyweight champion Makoto Uehara stopped K-1 heavyweight star Nori in the first round with a brutal right hook after a series of punching combinations.