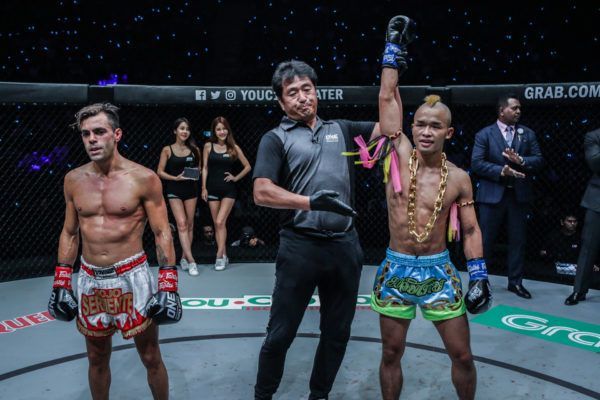 ONE Championship: Inside the Matrix IV Preview and Predictions

After a spectacular event that resulted in UFC veteran John Lineker knocking out Kevin Belingon in the second round, ONE Championship returns to action on Friday, Nov. 20, to deliver yet another exciting card. ONE Championship: Inside the Matrix IV features a strawweight kickboxing clash between No. 2-ranked contender Wang Junguang and promotional newcomer Aslanbek Zikreev which is sure to deliver a main event for the ages.

Junguang looks to get back in the win column after suffering his first professional kickboxing defeat since 2018 at the hands of Sam-A Gaiyanghadao. Meanwhile, Serbia’s Zikreev makes his ONE debut in hopes of challenging for the gold and proving he is one of the very best in combat sports today.

The co-headliner is a Muay Thai bout between Rocky Ogden and Joseph Lasiri. Ogden seeks to bounce back after suffering a unanimous-decision loss in his ONE debut to Sam-A Gaiyanghadao. Lasiri attempts to return to the win column after dropping a majority decision to Mongkolpetch Petchyindee.

The remainder of the card features three MMA bouts that shine on a spotlight on the likes of Bruno Picci, Kwon Won II, Ryogo Takahashi, Yoon Chang Min, Maira Mazar and Choi Jeong Yun. Picci and Won II face off after collecting a number of finishes throughout their respective careers. Takahashi, who takes on the undefeated Chang Min, is out to bounce back after suffering his first professional MMA loss since 2014. The evening begins with a women’s catchweight scrap, as Mazar and Yun look to climb the women’s rankings.

ONE Championship: Inside the Matrix IV starts at 7:30 a.m. ET and is composed of five fights. American fans can view the entire show for free on B/R Live. International fans can tune in on the ONE app.

Enfusion champion Wang Junguang clashes with Aslanbek Zikreev in a kickboxing headliner on this card. What can fans expect when these two men lock horns?

Zikreev makes his ONE debut after establishing himself as a successful Russian and European Muay Thai champion throughout his career in the sport. He fights under kickboxing rules after a long and successful amateur and professional career in Muay Thai. Zikreev grew up in Kemerovo, Serbia, which has produced numerous successful champions in Muay Thai and kickboxing over the years. He is extremely well rounded and is known for pummeling his opponents with volume striking. However, he is more than willing to switch off his aggressive approach when necessary and implement a calm and calculated game plan to frustrate his opponent and land clean and accurate strikes. His most effective weapon is without a doubt his power right kick, which has decimated the body and legs of numerous opponents in the past. Zikreev joins the promotion ready to make a splash as he takes on the No. 2-ranked Junguang.

Junguang has compiled a 7-1 kickboxing record since 2018. He is quickly becoming one of the most recognizable names on the promotion’s kickboxing roster. The Chinese sensation was perfect prior to facing Sam-A- Gaiyanghadao in December 2019 for the inaugural ONE kickboxing strawweight title. Despite losing a unanimous decision and facing a vastly more experienced opponent in Sam-A, Junguang moved forward for five straight rounds and continuously attacked his opponent with a plethora of strikes. The southpaw is a volume striker who attacks his opponents with a variety of punches and kicks as he looks to tire and wear them out until they quit. He also packs a powerful punch in both hands and has landed numerous straight lefts and power rights to the jaw of his opponents throughout his kickboxing career. He now looks to rebound from his only loss since 2018.

The pace that Zikreev and Junguang maintain throughout a fight is what will lead to such an exciting bout. Both men quickly establish themselves as the obvious aggressor with consistent forward movement. Zikreev will look to use his right power kick early and often, while Junguang wants to counter with hooks and straights to Zikreev’s head.

One of the most interesting aspects of this bout is that Zikreev will not be able to utilize his vicious elbows under kickboxing rules. Thus, he will have to adjust and use other weapons in his arsenal if he hopes to defeat Junguang and steal the Chinese star’s strawweight ranking. When it is all said and done, however, Junguang will emerge the victor with a unanimous decision over the newcomer. Zikreev will have his moments in the fight, but the experience of Junguang under the ONE banner and his comfortability at fighting with kickboxing rules will allow him to control Zikreev with flurries and forward movement. His victory could result in a possible rematch with Sam-A for ONE gold.

Can Joseph Lasiri get the better of Rocky Ogden, who is coming off an unsuccessful ONE Muay Thai title bid?

Ogden’s promotional debut was as high profile as it gets. The Australian native faced Sam-A Gaiyanghadao for the inaugural ONE Muay Thai strawweight title. The battle resulted in a unanimous decision in favor of Sam-A and disappointment for Odgen. However, the fact that the Australian prospect faced an opponent of Sam-A’s caliber in his ONE debut and went five full rounds is nothing short of impressive.

Ogden is a protege of the legendary John Wayne Parr, a revered figure in the world of combat sports out of Boonchu Gym in Gold Coast, Australia. Ogden has won over 40 professional bouts while fighting in top Muay Thai organizations during his time in Thailand and undoubtedly established himself as one of the most prominent recently signed talents to the ONE promotion. Ogden boasts a complete Muay Thai arsenal. His two most significant weapons are the straight right and the power right kick, which he throws in abundance to the head and body of his opponent. Ogden has displayed an impressive ability to remain calm and patient throughout his career, which is rare for younger fighters in the sport. Now, Ogden looks to bounce back in his sophomore appearance with ONE by taking on Italy’s Lasiri.

Despite a successful kickboxing career and 38 pro Muay Thai victories, Lasiri has experienced some adversity in the last few years of his career, which is evident in his lackluster record since 2018. The 29-year-old has gone just 1-4 since joining ONE in 2018 after finding tons of success fighting throughout Europe. He has suffered losses against the aforementioned Sam-A, as well as Singtongnoi Por.Telakun, Jonathan Haggerty and Mongkolpetch Petchyindee. His sole win under the ONE banner came at the expense of Hiroki Akimoto. Now, the Monza native is looking to prove to not only ONE fans, but to himself as well that he still has what it takes to compete at the highest level.

Ogden bit off more than he could chew in his promotional debut, but he has adjusted by taking on a more sensible opponent for his sophomore appearance. He will rebound with a finish of Lasiri, which might mark the end of the Italian’s stint with the ONE organization and the birth of a prospective contender in Ogden.

The remaining three contests in this lineup are MMA bouts. Which one promises to deliver the most action?

All four of these ONE combatants are proven finishers who constantly take the fight to their opponent in search of either a submission or a knockout. Pucci and Won II have combined for 13 professional finishes out of 20 combined fights. Their meeting is a match made in heaven. They’ll come out aggressive and eager to impose their dominance. The bout between Takahashi and Chang Min figures to be similar, as the pair have also combined for 13 finishes.