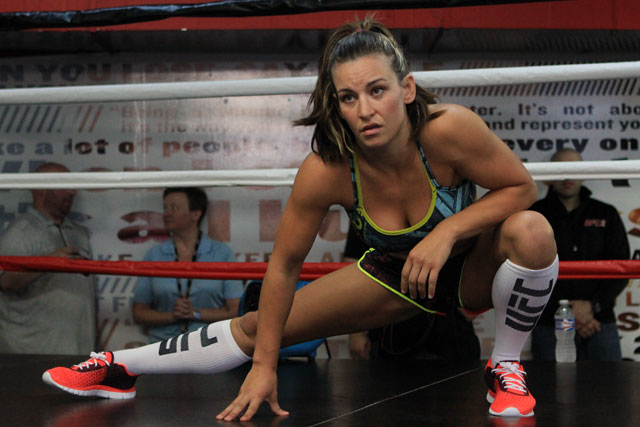 UFC President Dana White confirmed via UFC Tonight on Wednesday that Holly Holm will not face Ronda Rousey in a highly anticipated rematch, but did not announce Holm’s next opponent. Not even 24 hours later, Bleacher Report’s Jeremy Botter tweeted breaking news that Miesha Tate would indeed be the first to challenge Holm for the bantamweight title.

It’s no secret that Holm and her team from Jackson-Winkeljohn objected to the long layoff for the new UFC champ, despite a massive payday in her midst in an immediate rematch with Rousey. Holm, who is 34 years of age and used to a grueling fight schedule from her professional boxing days, made it clear that while she would follow the UFC’s lead, her preference was very much to fight before July, a wish that has subsequently been granted by the powers that be.

When looking for potential contenders, Tate immediately springs to the mind. She is the pick of the litter according to Mike Winkeljohn, who has stated in previous interviews that she deserves to be Holm’s first title defense after being overlooked for the Rousey fight in November.

Tate brings to the table a four-fight winning streak, but more importantly for a title fight, she brings an air of marketability and an impressive fan base that she has cultivated since her days as the Strikeforce bantamweight champion. All of these things are great for selling fights, but the question remains about how much of a threat she poses to Holm. Tate’s boxing has been highly scrutinized over the years, and while she has clearly improved, there’s little chance she will match Holm on the feet. Like Rousey, Tate uses her striking to close the distance and eats a lot of punches on the way in, lacking versatility with combinations and little head movement. Tate is a scrambler and will swarm her opponents by putting pressure on them as soon as the bell rings. When she does get her opponent to the mat, Tate has impressive top control and powerful ground-and-pound. Holm has excellent defense, but Tate brings the double-leg takedown into the equation. It could be her biggest weapon in this fight.

Should Tate dethrone the newly crowned champ, it would set up a third fight between Tate and Rousey. While the trilogy doesn’t pack the punch of Holm-Rousey II, it is still a fight that will appeal to fans and more importantly set up an intriguing fight triangle between Holm, Rousey and Tate which has the potential to unfold over the course of 2016.

But is Tate the right choice as Holm’s opponent? Let’s take a look at what three other potential contenders bring to the table.

Ranked fourth in the division, Amanda Nunes is a prolific striker who hit the spotlight after she defeated Olympic medalist Sara McMann via rear-naked choke in the first round of UFC Fight Night 73, proving that she has more than one weapon in her arsenal. The American Top Team protégé has improved leaps and bounds across the board and would make for a very exciting fight. However, her biggest downfall at this stage would be her lack of marketability. Nunes has been vocal about not wanting to “sell” fights and this may hinder her opportunities until there is no doubt in everyone’s mind that she is the No. 1 contender. Unfortunately for the Brazilian, that time is not now.

Cat Zingano is in the unique position in that she has not only defeated, but finished, both Tate and Nunes, and has a win over Raquel Pennington, the only bantamweight to really test Holm in the UFC. Zingano hasn’t fought in close to a year, though. Her last fight was the title loss to Rousey. However, Zingano brings an impressive Muay Thai background and isn’t afraid to throw a front kick and head kick. Her best work is done in the clinch with devastating elbows and knees. Holm’s takedown-defense skills were paramount in her win over Rousey, but Rousey very rarely likes to trade blows in the clinch, preferring instead to get her opponent to the mat. Zingano, on the other hand, has no issues turning a fight into a brawl at close range. If she does want to take the fight to mat, she will utilize her signature headlock throw, a move not often used in the UFC, which highlights just how much of an advantage she holds in terms of her strength. She also has a great chin and a ton of heart, which can be seen in her come-from-behind victories. Zingano’s biggest weakness in a fight against Holm will be her tendency to overextend on her striking, a mistake she cannot make against an elite counter striker. Zingano’s also known to be a slow starter, but whether or not that is a disadvantage is hard to say, as Holm tends to take her time feeling out her opponents.

For good measure, Valentina Shevchenko gets a look as a wild-card/dark-horse option. This fight, stylistically, would be the most fun fight to make. Shevchenko is a highly touted Muay Thai practitioner with over 70 professional fights to her name and holds multiple titles. She has been training in mixed martial arts in some form since she was 5 years old, and despite being most well known for striking, she also brings an above-average ground game into play, with a number of submission victories under her belt. Shevchenko has also proved she can mix it with the big girls on the UFC stage after dominating veteran Sarah Kaufman on less than 10 days’ notice, cementing her fifth straight victory as a professional. Shevchenko is a southpaw, like Holm, which adds another interesting element to this fight. She also, like Holm, prefers to stay just outside of her opponent’s range, but close enough to step in and counter. She has great striking defense, a skill the other contenders lack, and can mix up combinations with speed and precision, making her, if not now, definitely a future contender for the division.

Despite each of the contenders bringing their own styles, strengths and weaknesses to the table, it would be remiss of the UFC to overlook Tate yet again. The public snubbing of the bantamweight last year led her to consider retirement and she has star power that the UFC cannot afford to lose.