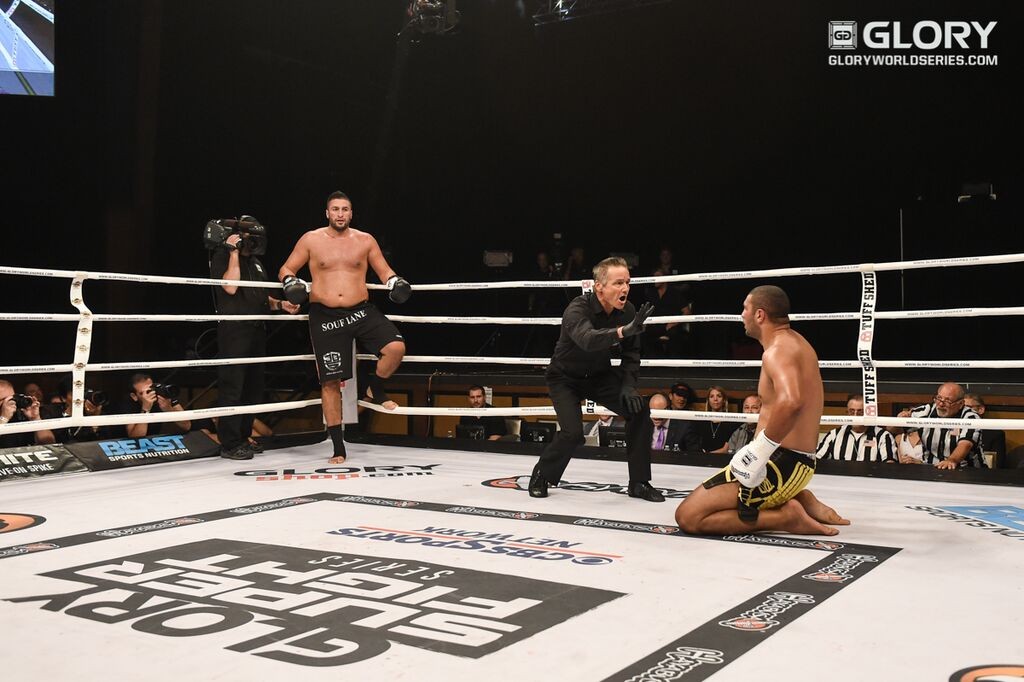 Top-10 heavyweight Anderson “Braddock” Silva was hoping to return to the win column in 2015 when he was scheduled to face Benjamin Adegbuyi at GLORY 21: San Diego. The fight was canceled when Adegbuyi was pulled due to a leg injury. The cancellation of the potential title eliminator left Silva without a fight, while Adegbuyi was given an opportunity to challenge for Rico Verhoeven’s GLORY heavyweight title at GLORY 22: Lille just one month later.

The change left Silva waiting in line for a shot at Verhoeven. On Friday, Aug. 7, GLORY headed to Las Vegas with a heavyweight headliner featuring Silva and Jamal Ben Saddik at the Hard Rock Casino and Resort for the GLORY 23: Las Vegas Super Fight Series. Silva was the favorite heading into the bout with the 24-year-old Moroccan, even receiving the Combat Press prediction for the event. Silva had long been considered firmly entrenched in the top-10 rankings of the heavyweight division. Silva was heading into the 10th year of his career already holding significant victories over top fighters Remy Bonjasky, Igor Jurković, Hesdy Gerges and many more. The 28-year-old “Braddock” was returning to competition after back-to-back knockout losses against Errol Zimmerman and Sergei Kharitonov.

Ben Saddik had already made waves in the kickboxing community with upset wins over the aforementioned Verhoeven, Bonjasky and Zimmerman. The top-10 heavyweight held an eight-inch reach and nearly 60-pound weight advantage heading into the match-up with the more experienced Brazilian. The weight wouldn’t play a factor, however, as the two men began round one.

Silva pressed the pace in the first round. The Brazilian entered striking range with his powerful hooks and controlled inside with quick clinch work. Silva threw his left hook and right hand with authority. The aggressive heavyweight looked to have returned to form, slipping from side to side and making Ben Saddik defend his offensive attack. A Silva right hand halfway through the first seemed to stun Ben Saddik, if just momentarily. The shot was the most significant of the round, but it wasn’t the last offense Silva would land in the final 90 seconds. Silva scored with multiple combinations while deflecting most of Ben Saddik’s infrequent counter strikes. The fighters traded combinations with Silva getting the upper hand before the round came to a close. The first frame was a clear 10-9 round for the favorite.

The second round was much of the same. Silva pressed the pace and kept Ben Saddik moving back and defending against the ropes. Silva picked up his frequency after the first minute, landing his left hook on more occasions while adding in a bigger array of kicks. A heavy kick to the chest and shoulders pushed Ben Saddik to the ropes where Silva worked more kicks and punching combinations. Silva landed a solid left hook at the 80-second mark. The shot opened up more offense in what seemed to be an exponentially building momentum for “Braddock.” Silva landed a right hook to the head and followed with a hard left hook to the body just seconds later. Silva’s punches continued to land. A left hook and right to the body scored for Silva. He slammed another left body kick into the right midsection of Ben Saddik. The Moroccan fired back a little more with time running down, but did nothing to the convince the judges to score the round in any other manner than a 10-9 for Silva.

Ben Saddik headed back to his corner, looking for something to drag him back into a fight he was clearly going to lose. Nicky Hemmers convinced the colossal heavyweight to push the pace early. The coaching in the corner birthed a renewed sense of confidence for Ben Saddik. He came out early in the third round and the exchanges heated up quickly. Ben Saddik threw his right head kick multiple times, with Silva taking the force of the blow on his arms and shoulders. Silva quickly put himself back into the fight with a counter right hook that clipped the jaw of his desperate opposition. The flush shot was met with a return body shot by Ben Saddik. Silva landed during the combinations, but he was caught standing still while chasing his opponent into the ropes. The heavy right hook floored Silva in an instant. The follow-up left hook missed by a large margin as Silva’s knees buckled in a split second.

Silva willed himself to the feet and the fight was back and forth again. Ben Saddik landed a body kick and punching combination in between getting caught with a Silva right hand. Ben Saddik caught Silva’s chin with his toes on a heavy right-leg high-kick attempt. Silva was getting beaten down in a fight that was heading to a draw thanks to the comeback of the Moroccan. Ben Saddik wasn’t willing to leave the fight in the hands of the judges, though. He poured on the offense and was rewarded with a short left hook that dropped Silva. The shot wasn’t ruled a knockdown, but Ben Saddik still capitalized with an aggressive power-punching attack from the corner of the ring. Ben Saddik chased Silva into the ropes where he grabbed a hold of the back of Silva’s head with his left hand and landed two short right hands in the clinch. The two fighters broke free and Ben Saddik was hoping for the finish with the clock ticking down.

With less than 20 seconds remaining, Ben Saddik threw his right hand straight through the chin of Silva. The shot cracked the Brazilian, but he wouldn’t go down just yet. It took a follow-up left hook and right hand to put Silva down again. The knockdown earned Ben Saddik the win, whether Silva survived the count or not. “Braddock” made his way to the feet, but the fight was stopped with just five seconds remaining. Jamal Ben Saddik earned the Combat Press 2015 “Comeback of the Year” with a sense of determination and unrelenting aggression in the third and final round.

You can watch the entire fight above (courtesy of GLORY).