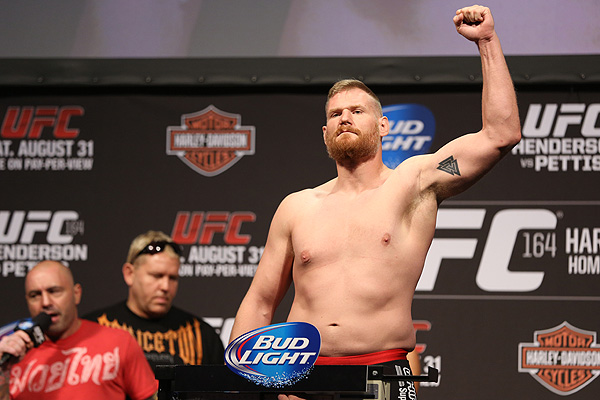 On Friday, Sept. 25, the UFC will host the weigh-ins for UFC Fight Night 75: Barnett vs. Nelson which takes place Saturday, Sept. 26, from the Saitama Super Arena in Saitama, Japan.

In the night’s main event, veteran heavyweights Josh Barnett and Roy Nelson will lock horns. The 37-year-old Barnett has been out of action for more than a year and a half and will look to rebound from a first-round knockout loss to Travis Browne at UFC 168. The loss was just Barnett’s second since 2006. Nelson, meanwhile, enters the match-up on a two-fight skid. The Ultimate Fighter winner has dropped back-to-back bouts to Alistair Overeem and Mark Hunt.

The co-main event features a middleweight match-up between former Strikeforce titleholder Gegard Mousasi and TUF alum Uriah Hall. Mousasi has won three of his last four leading up to the bout, most recently topping Costas Philippou in May via decision. Hall rides a similar wave of momentum, claiming wins in four of his last five.

The fighters will hit the scales at 11 p.m. ET on Friday. A live video feed appears above (courtesy of the UFC), while the results appear below.