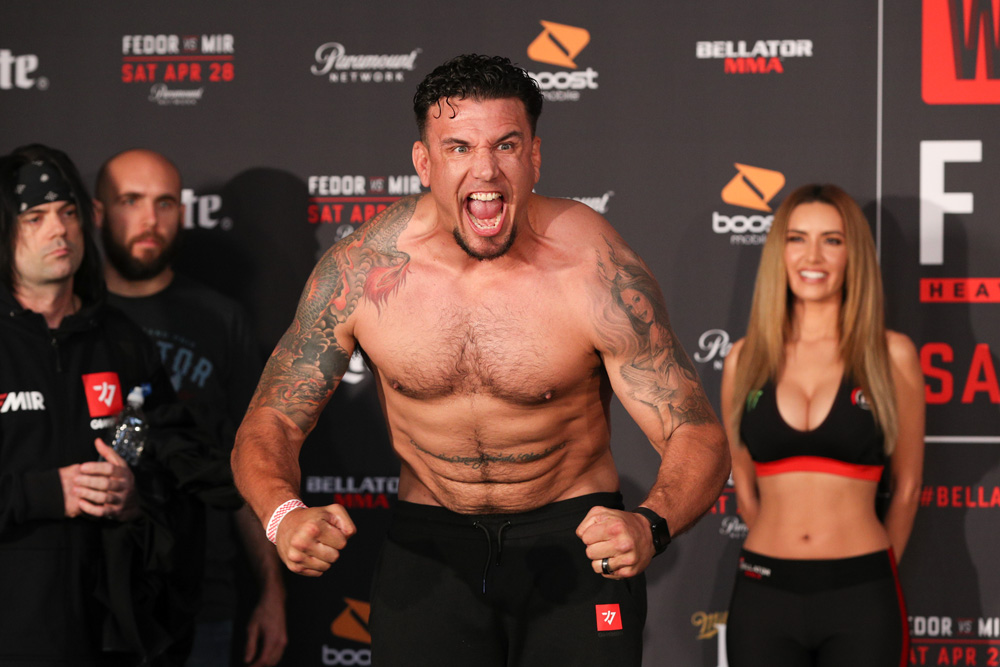 In 2011, Frank Mir was on a mission. He was still in the thick of things in the UFC’s heavyweight division, where Brock Lesnar, Shane Carwin, Junior dos Santos and Cain Velasquez all roamed. So, too, did Roy Nelson. In fact, Mir had to get through Nelson to move one step closer to a title shot. He did it in dominant fashion, too. It was just one step in a path that would eventually lead Mir to a championship bout with dos Santos that the grappler simply couldn’t win. It’s been downhill for Mir since then, but, thanks to Bellator head Scott Coker’s penchant for nostalgia, the former UFC champion has a chance to relive his glory days.

That’s because Mir is set to rematch Nelson at Bellator 231 at the Mohegan Sun Arena in Uncasville, Conn. It’s been more than eight years since these two big men last collided, and the numbers aren’t pretty. Mir is just 3-8 in the aftermath of his fight with Nelson, who is a meager 8-11 in that same span. One of these two quadragenarians will snap a severe skid and add another win to their record.

These two scraps top a main-card lineup that also includes blue-chip prospect Ed Ruth in a welterweight showdown with Jason Jackson, UFC veteran Bec Rawlings against Ilara Joanne, and WWE star Jake Hager in a heavyweight clash with Anthony Garrett. Even the preliminary card has some appealing action, with Mandel Nallo facing off with Killys Mota, Talita Nogueira tangling with Jessy Miele, and Jon Manley going up against Thiago Oliveira.

Bellator 231 kicks off with the prelims at 6:45 p.m. ET on DAZN and Bellator.com. The main card follows at 9 p.m. ET with a simulcast on the Paramount Network and DAZN.

Well, they still do hold star power from their lengthy respective stays in the UFC. Bellator head Scott Coker has always been fond of featuring big names, even over-the-hill ones, as opposed to building talent from within.

Unfortunately, this not-so-dynamic duo has combined for losses in their last seven combined efforts. Mir hasn’t registered a victory since 2015, and Nelson is just 4-10 over his last 14 bouts. Were it not for name recognition, these guys wouldn’t be within shouting distance of a main event. Yet, here we are.

It is a rematch, but from a 2011 bout when Nelson checked in at 34 years of age and Mir at 32 (the fight came four days after his birthday). Nelson was only a few fights removed from his win on The Ultimate Fighter, and Mir, who won the fight, was firmly in the UFC title mix. Now, they are 43 and 40, respectively. Mir has suffered a streak of losses to Andrei Arlovski, Mark Hunt, Fedor Emelianenko and Javy Ayala. Nelson, meanwhile, has been topped by Matt Mitrione, Sergei Kharitonov and Mirko “Cro Cop” Filipovic.

The first go-around was a one-sided affair in Mir’s favor. He edged Nelson in all categories, including striking. Nelson failed to connect with his patented knockout haymaker, and so he floundered for the duration of the fight. Nelson hasn’t exactly improved since then. If anything, he’s become even more of a lumbering, head-hunting heavyweight.

If we take the first fight as a template and throw in Nelson’s decline, this could be a groaner of a fight. Mir’s not getting any younger either, but he’s also never been a one-trick pony. Whereas Nelson often ignores the majority of his toolbox in favor of a brawl, Mir isn’t opposed to using slick boxing, solid wrestling, and polished grappling to get the job done. Unless Nelson gets lucky with his overhand right, Mir’s likely to dominate this fight even more than he did in their initial match-up.

Phil Davis was derailed by Vadim Nemkov, but the light-heavyweight star rebounded with a win over Liam McGeary. Will Davis impress or disappoint when he meets Karl Albrektsson?

Davis, a former top contender in the UFC and former Bellator champion, has now suffered five losses, but they came to Rashad Evans and Anthony “Rumble” Johnson in unanimous verdicts and Ryan Bader (twice) and Nemkov in split nods. Every one of these fighters was at the top of their game when they met Davis, so there’s no shame in these defeats. Meanwhile, he’s taken victories over a list of opponents that includes Alexander Gustafsson, Antonio Rogerio Nogueira, Lyoto Machida, Glover Teixeira and Liam McGeary (twice). Not too shabby.

Albrektsson pales in comparison. His run in the Rizin Fighting Federation included losses to Valentin Moldavsky and Jiří Procházka, plus a split-decision win over the aforementioned Nemkov. That’s the extent of his notable competition, though, unless you include Josh Stansbury and Christiano Frohlich, who are hardly world-beaters.

Davis is likely to be too much for the 26-year-old Swede. The Alliance MMA fighter carries four-time NCAA Division I All-American honors and one national championship, so he’s a bona fide wrestling stud who should be able to put Albrektsson on the mat whenever he feels like it. “Mr. Wonderful” can then either submit his opponent or finish him off with ground-and-pound. Even if Davis can’t stop the Rizin veteran, he should be able to control position en route to an easy decision victory.

Is Jason Jackson a spoiler threat for Ed Ruth?

Ruth is starting to put it all together, though, while tackling tougher challenges. He’s transitioned from victories over Chris Dempsey and Ion Pascu to wins over Andy Murad and UFC castoff Kiichi Kunimoto. His only stumble came against Neiman Gracie, a grappling ace who sunk in a rear-naked choke to finish Ruth.

Jackson does have three submissions to his credit, but this is more about a veteran mindset in the cage. If Ruth makes a mistake, his 28-year-old counterpart will pounce. However, while Jackson is a spoiler threat, an actual upset is still a longshot. It took a highly decorated Brazilian Jiu-Jitsu practitioner to defeat the wrestler. Jackson simply lacks that level of skill. Ruth should wrestle his way to another win.

Pro-wrestling star Jake Hager, aka “Jack Swagger,” returns to action when he meets Anthony Garrett. Should fans be excited?

Any followers of pro-wrestling will be excited. Those whose preferences lean more in the direction of MMA should just consider this as an improved test for Hager. The former WWE superstar has thus far rumbled through two opponents who held 1-1 marks. The first of these men was a 40-year-old who had also struggled to just an 11-8 record as an amateur. The second one looked like he’d just climbed off the couch and dusted off the Cheetos crumbs to fight Hager. At least Garrett has six career pro outings and four wins.

Unfortunately, that’s where the good news ends. Garrett’s superior record includes two losses, and those defeats came against fighters with severe losing records. Matt Uhde was just 3-6 when he dropped Garrett in a mere 19 seconds. Jordan Mitchell, Garrett’s most recent foe, was 6-11. These are fights that Garrett should have won, but he didn’t.

Hager’s getting babied here, and it could eventually backfire. All Garrett needs is one lucky punch or miscue from Hager on the mat. However, that’s not likely to happen. Hager should emerge with his hand raised, but he definitely needs a bigger test once he does.

The Bellator preliminary card can sometimes be a wasteland of regional-fighter auditions and pure filler, but sometimes there’s a gem or two hidden in there. This lineup features an interesting women’s featherweight battle between Talita Nogueira and Jessy Miele, but it’s the lightweight prospect showdown between Mandel Nallo and Killys Mota that really gets us excited.

The 30-year-old Nallo, who has an interesting moniker of “Rat Garbage,” remains perfect through seven pro outings. He’s finished his two Bellator opponents, including the far more hyped Carrington Banks. He’s stopped all of his opponents, and he tends to work fast.

Mota, a 28-year-old out of Brazil, has been competing at the professional level since 2013. He streaked out to a 10-0 start that included a decision win over the formerly undefeated João Carvalho and stoppages of Akihiro Gono and Bobby Lee, the latter of which came under the Legacy Fighting Alliance banner. Mota received his first blemish in his bid for the vacant LFA title when he was stopped via strikes in the fifth round by Austin Hubbard, who has since gone on to win one of his two bouts in the UFC. Mota is also a finisher, but he has seen the scorecards on two occasions.

It would be an absolute shock if this one goes the distance. These guys are killers, and at least one of them is bound to break into the upper tiers of Bellator’s stacked lightweight division.