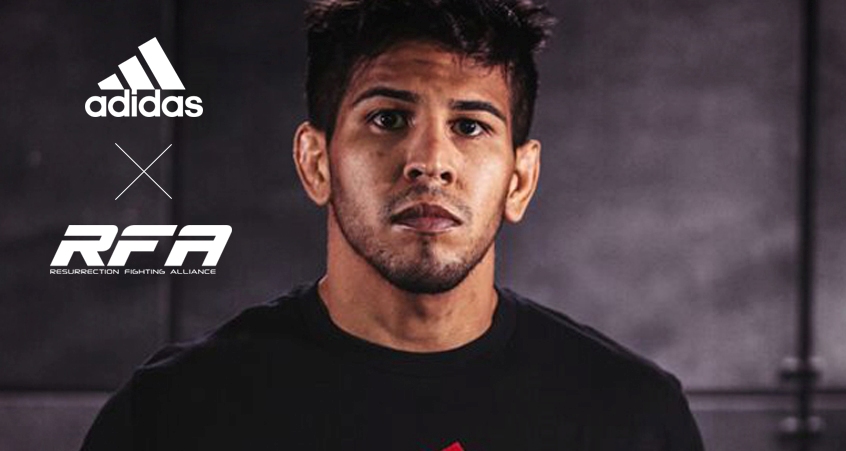 Destiny. There are some things that we just don’t control. Skin color, size, extenuating circumstances — those could be called your cards. Not everyone is given the cards they would like to have. But just like poker, no matter what cards you’re dealt, you can win. You just have to know what to do with them.

Matthew Lopez, a fast-rising bantamweight who fights for the Resurrection Fighting Alliance, originally wanted to be a professional baseball player.

So, Lopez devoted himself to wrestling. His family relocated from the tiny Arizona town of Safford to Tucson to allow him to wrestle at one of the best high schools in the state, Sunnyside High. He was the only wrestler in the prestigious program to ever win four state championships. He went to Arizona State his freshman year, but tore his ACL. After dropping school his sophomore year, he rehabbed and got back into the game and was then recruited by Cal State Fullerton. Injuries and personality conflicts kept him from meeting his goals during college, but his disappointments fuel his current drive for success.

“I had goals I didn’t get to complete. I worked hard all year, but never got to go meet those goals. If I had success, then I don’t know if I’d be fighting,” admitted Lopez.

After college, Lopez noticed a lot of his friends and competitors finding success in MMA. His roommate was preparing for a fight and needed someone with a wrestling background. Lopez took a few boxing classes and found himself sparring in Mark Munoz’s gym. Shortly after that experience, Lopez started training and took his first MMA fight. The rest, as they say, is history.

Lopez has put together a very impressive run, going undefeated through six bouts as a professional fighter. Five of his wins came in the first round, and mostly early in the round.

“I am not one who wants to get into big wars and get into ‘Fight of the Night’ battles,” Lopez explained. “I want people to say, ‘Oh man, he just crushed that guy.’ I want Ronda Rousey syndrome, where people are almost disappointed when you don’t finish the opponent in 15 seconds.”

At RFA 29 just this past month, Lopez faced one of his toughest opponents, Kevin Clark. Clark was 4-1 with big wins and made for a great match-up, on paper anyway.

“We came out ready to go,” said Lopez. “I hit him with a combo and he fell but scrambled back up. We were against the cage, and he caught me with a… well, I don’t know, even from watching it, it was either a hook or a head-butt. We were both really going for it and I didn’t even really feel it. I just wondered why I wasn’t going forward.

“Then I caught him. He fell, I took his back and that was it.”

Lopez got the submission by rear-naked-choke in just 36 seconds of the first round.

Lopez has taken the cards he was dealt and parlayed them not only into a growing success for himself, but also into hopes to help his students turn their cards into winning hands. Mondays, Wednesdays and Fridays, you can find Lopez coaching the Reign Wrestling Club, a group of kids from ages four and a half to 18 years.

“Reign closed six months ago, but we have kept the competitive wrestling team going. I love these guys, but I’ve gotta mess with them,” said Lopez while laughing as he gave one of the kids heck for strolling into class late. “If they can learn from my mistakes, that would be everything.

In between his classes, Lopez has a 45-minute break. That’s when he gets his wrestling work in.

“Twenty minutes of drill time and then 20 minutes of MMA wrestling with my fellow coaches, who are all beasts,” said Lopez. “Tuesday and Thursdays are boxing and BJJ. On Thursdays, I usually get three full workouts in. I get running and strength and conditioning in throughout the week. On Saturday, I like to mix it up. My girlfriend and I will go hiking or go kick the soccer ball in the park. I suck at soccer, but it’s fun and she played in college.”

With only five weeks from his last fight until his next one, Lopez has no time for breaks. His next challenge comes in the form of Justin Linn, who is 7-1 with his last two fights ending in the first round from leg injuries. His last bout against Adrian Cruz ended with a bone-shattering kick.

“Of course I am prepping for Muay Thai. I am prepping with some of the best guys in the world, but I have to continue to do what I am doing — focusing on improving what I do,” said Lopez. “Am I working on checking head and leg kicks? Heck yes. But I am really dialed in on improving my game plan. My game plan and my strengths are more important.

“This is where fighting and life really mirror each other. You are going to go through obstacles. You can choose to keep moving forward and overcome them, or you can dwell on those things that happen.”

In other words, you can lament being dealt certain cards. But those cards, any cards, can be the ones that win you the championship. Lopez has his cards, and he knows exactly what to do with them.