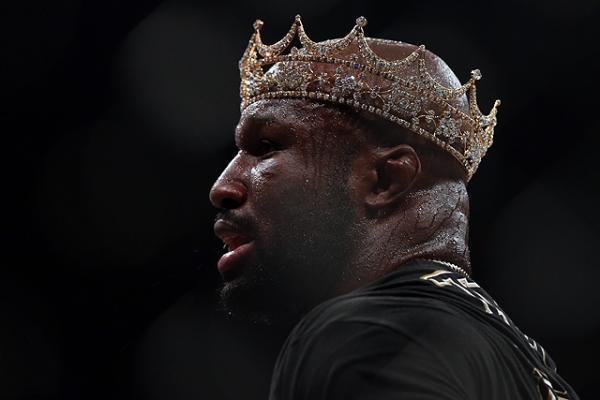 Kings are typically viewed as tyrannical villains in American society. They are the oppressor that must be overthrown for true happiness to be enjoyed by the public. Perhaps it’s no surprise that the man known as “King Mo” is summarily viewed as the villain that fans love to root against. Yet, hidden behind the jewels of a crown lay the foundations for a hero to emerge.

Muhammed “King Mo” Lawal is a fighter that many MMA fans associate with negative feelings. Failed potential. A cheater. Pompous. These and other derogatory terms have been used to describe the former Strikeforce light heavyweight champion and current Bellator title contender. It’s the only side most fans have seen, because Bellator has used his gift of promotion to insert Lawal into high-profile fights since coming aboard.

Lawal finds himself in yet another high-profile spot later this year. He spoke with Combat Press about the recent announcement of a Bellator-GLORY co-promoted show. Lawal is part of a one-night, winner-take-all tournament to earn a crack at the Bellator light heavyweight champion.

“I don’t know what’s going on. We have to wait, like everyone else,” Lawal said.

The event is sure to be a spectacle, showcasing some of the best from Bellator MMA and GLORY kickboxing. The image of an MMA cage and a kickboxing ring appearing in the same arena side by side is sure to be one that will be remembered. While regional promotions have been putting on these kind of shows, it’s very rare that we see one of the top promotions in MMA put an event like this together.

Although perhaps it shouldn’t be as much of a surprise, considering the man at the helm of Bellator, Scott Coker, has shown in the past that he not only knows how to run a successful MMA promotion, but also knows how to generate buzz surrounding an event. No more was that fact evident than in Bellator’s most recent “tent pole event,” Bellator 138. The card featured a number of noteworthy Bellator fighters, including featherweight champ Patricio “Pitbull” Freire. Yet, it was Ken Shamrock and Kimbo Slice, two fighters over the age of 40, that headlined the card. The event wound up producing the largest average viewership in the promotion’s history.

“No matter what, people will like it as long as it’s entertaining,” Lawal said.

Indeed, the show became a running joke among MMA fans and journalists. Yet, a large number of people tuned in. As the saying goes, the proof is in the pudding. And for Bellator MMA, there’s proof that a large audience will tune in if the card is considered a big enough event.

MMA fans can always count on King Mo to provide entertainment value. Ever since stepping foot in the sport, the man has created a buzz with fans. Between the entrances and his ability on the microphone, Lawal has a knack for generating interest in himself. Unfortunately, not all of the attention has been positive. Hurting his cause was his initial run in Bellator, one which saw him struggle with competition that many fans felt he’d have no trouble in dispatching.

After defeating Przemyslaw Mysiala in his Bellator debut, Lawal would go on to compile a 3-3 record from 2013-2014, including two losses to Emanuel Newton. Lawal was heavily criticized during this stretch for not utilizing his wrestling background. Lawal’s first few fights in Bellator saw him operate almost exclusively as a boxer. Although it became easy for fans to point to Lawal forgetting his wrestling, he believes they should be reminded of his extensive medical history.

“People forget about the surgeries and staph infection,” Lawal said.

Lawal nearly lost his leg after battling a severe staph infection following surgery for an ACL injury in 2012. With the injuries and time spent on an operating table piling up, it’s no wonder Lawal struggled to incorporate his wrestling game. But it seems as though he’s finally recovered from those detriments. Lawal has put together three straight wins, and based on Lawal’s ability to move in his last bout against Cheick Kongo, he seems to have fully recovered from his knee injuries.

Lawal has also seemingly shown another side to the “King Mo” character he’s helped create. Prior to Bellator 138, he, along with several other stars from the promotion, visited a pediatric hospital. The visit was filmed, and it aired during the broadcast. He’s also shown the capacity to be helpful to other fighters that are around him long enough to soak in some of the knowledge Lawal is capable of giving.

Following his victory at Bellator 138, former Bellator featherweight champion Daniel Straus said that King Mo told him to be more vocal when given the chance. He managed to put on the evening’s best interview by letting everyone know that “he’s coming to beat that ass.” Current UFC light heavyweight champion Daniel Cormier also shed some light on Lawal that contradicts how many perceive him.

“If [they] look at me and think that’s how I am, then that’s their loss. They can assume all they want,” Lawal stated.

Admittedly, I thought the crown defined the man. Instead, after speaking with Lawal for a handful of minutes, it became clear the man was much more than a crown. After watching Lawal struggle for much of his initial Bellator run, I joined the group of MMA fans who thought “King Mo” was all flash and no substance.

Yet, watching Lawal at Bellator 138 did a lot to change that perception. In between fights (and sometimes even during them), fans would crowd the VIP section to ask for pictures. Lawal was one of the more popular requests on that evening. Lawal would make the rounds, never once denying a fan’s request or so much as questioning them on their request. Lawal isn’t the biggest star in MMA, but he’s certainly one of the biggest within Bellator. It’d be easy for him to brush off fans and big-league them. It’s part of what makes his training at American Top Team a perfect fit in his mind.

“I joke around a lot and get along with the guys. ATT is the perfect fit for me, with how many training partners I have and the coaches there,” Lawal said.

While the showmanship will still be prevalent for any of Lawal’s fights, perhaps fans will have the chance to see past it and view the fighter for who he is — a well-educated, diverse fighter who is a straight shooter when it comes to the fight game. It’s going to be a tough obstacle to overcome the years of bravado Lawal has shown. If Bellator can show that he’s not the villain everyone makes him out to be, maybe MMA fans can realize that not all kings are created in the same mold.