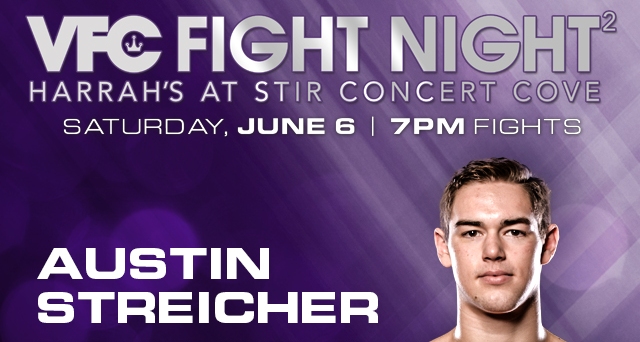 Competing in mixed martial arts is no easy task. For many, the combination of wrestling, striking and jiu-jitsu is a daunting challenge. But for a select few, it comes naturally.

Count Austin Streicher amongst the latter, as his transition into the sport has been effortless.

At just 19 years old, Streicher has already become a national Muay Thai champion and has extensive wrestling experience — including high school All-Conference and All-State honors. Since graduating high school, Streicher has spent plenty of his time in the gym. He currently holds an unblemished record in three different sports: boxing, Muay Thai and MMA, with a combined record of 6-0.

Training out of Premier Combat Center in Omaha, Neb., the eager featherweight says he has become “technical and well-rounded” as a result of working with UFC vet and MMA coach, Ryan Jensen, Muay Thai coach, Kurt Podany, and boxing coach, Jose Campos.

“Austin is the youngest MMA fighter I’ve ever worked with and brings the new mentality to MMA fighters with him practicing and competing in every sport individually,” Campos explained. “As his boxing coach, I see his speed and athleticism as his best weapons.”

Streicher’s natural tools, as well as his wrestling experience have given him the upper hand thus far in his career. To date, Streicher (pronounced striker) has lived up to his moniker, earning three knockout wins to accompany a decision win over Malcolm Coulter in December. The young fighter revealed a sense of pride when reflecting on his MMA debut.

“I didn’t really go into my debut with a specific expectation. I put in the hard work and knew I was ready, so I thought, whatever happens, happens,” said the Nebraskan. “Every time someone fights, they will always look back and wish they had done things differently. I went out, gave my best effort, and got the win. So to me, I wouldn’t change a thing.”

Being a fighter has meant that the 19-year-old must juggle his priorities on a daily basis. In addition to his training, Streicher also attends the University of Nebraska-Omaha. Although a degree is still a few years away, he’s looking forward to devoting his full attention to combat sports in the future.

“Training and competing while working and being a full-time student at UNO is no easy task,” admitted Steicher. “Thankfully, I’m able to balance everything

“However, after I graduate is when the real fun begins. I’ll have my education, and will be able to dedicate myself 100 percent.”

Now, gearing up for his second appearance in the cage, Streicher’s approach remains the same day in and day out. As he aims to evolve his skill set, he knows there’s always more work to be done.

“I don’t really use the term ‘fight camp,’” he said. “I’m always in the gym training to better myself and my training partners. Fighting has so many challenges in itself. Learning the sport takes care of itself by training the way a professional athlete should train.”

Despite being so young, it didn’t take Streicher long to latch onto the sport and the thrill of competing. Being in the cage has only fueled his desire to put on a show.

“First and foremost, I absolutely love [the sport],” said Streicher. “It’s something I’ve been truly passionate about since the day I started training.

“I also love that fighting gives all of my family and friends an opportunity to come together at the same place and time. Winning in front of everyone that supports me is one huge factor that drives me. I fight for myself, my gym, my coaches and trainers, and all of my friends and family.

“I just hope I perform my best and make everyone proud!”