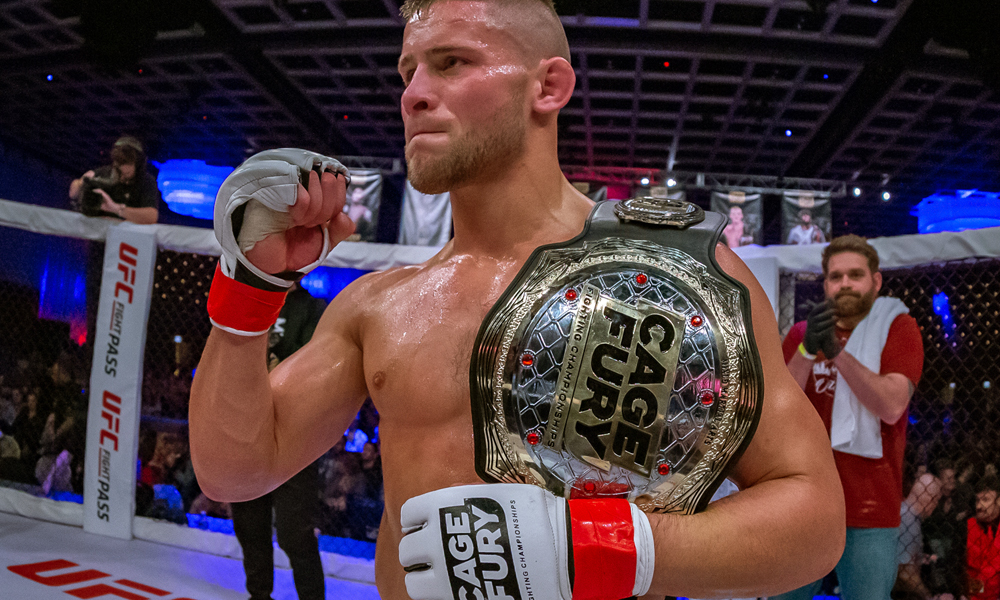 Five Men’s Featherweight Prospects the UFC Should Sign in 2021

A few years ago, Driscoll seemed like he had a long way to go before he could be considered as a true up-and-comer. He was a guy with a strong wrestling background, but he had yet to really morph into an attractive prospect. He won some decent fights, but also suffered losses to some questionable opponents. However, Driscoll has made some changes to his scenery and his game, and he now appears to have great potential.

Driscoll’s new outlook comes in part as a result of his move to the American Kickboxing Academy. His new team has helped him to round his game off and really emerge as a top featherweight prospect. He’s a tall and long 145-pounder who can strike at a distance, but also has that great wrestling background in his back pocket. He took one fight this year. It came on Dana White’s Contender Series, where Driscoll dominated the ultra-tough Dinis Paiva to take a clear-cut decision.

The UFC boss passed on Driscoll, but that doesn’t mean we’ve seen the last of him. He is clearly talented and has shown vast improvements in a short amount of time.

He lost a featherweight championship on the scales to close out 2020, but Froes has proven himself to be UFC-ready for the past couple years. The Nova União product is well rounded and has one of the strongest resumes in the division outside of the UFC.

Froes possesses the signature Nova União ground game, but he also has impressive striking and knockout power. He’s physically imposing and large for the weight class. Froes fought just once in 2020, but it was an impressive effort. He blasted his way through Marat Balaev with a nasty barrage of knees, body shots and power punches to extend his winning streak to four fights.

While he did have to relinquish a title belt, it could actually be a blessing in disguise for Froes. He’s not the champion of a major regional organization anymore, which could free him up to sign with the UFC.

Most MMA experts will tell you that the best background an MMA fighter can have is amateur wrestling. Poland’s Rutkowski is a prime example. He’s an accomplished Greco-Roman wrestler who has been extremely dominant while fighting in his home country.

Rutkowski is known for ragdolling and dominating his opponents through takedowns and top control. He has solid ground-and-pound, but he hasn’t shown much of his submission prowess. He hasn’t lost since his first two pro fights in 2015. Rutkowski went 2-0 in 2020. After beating Rene Runge, he went on to win the FEN featherweight strap in dominant fashion over 29-fight veteran Adrian Zielinski in a rematch from earlier in their careers.

Rutkowski is a big name in Poland. With as dominant as he has been, it’s time for him to step up. His wrestling chops and toughness are huge assets that could lead him to success in the UFC.

This is Sabatini’s second appearance on this list. The 16-fight veteran has certainly proven himself as a worthy candidate for the UFC. The Cage Fury FC champ has been dominant on the East Coast regional scene and is ready to take a step up in competition.

The 30-year-old Pennsylvanian is an excellent submission grappler who has recorded most of his wins by way of tapout. He prefers the rear-naked choke, though he couldn’t find one of those in 2020. He started off with a loss in 2020, albeit due to a nasty arm injury. Sabatini healed up and finished the year with a pair of stoppages: a first-round knockout of Jordan Titoni and a second-round armbar of Jesse Stirn. The latter of those victories put Sabatini back on the Cage Fury featherweight throne.

Any fighter in any organization who goes to the ground with Sabatini risks getting put away by the top prospect. That’s a compliment to how strong a fighter Sabatini is. He can compete in the UFC right away.

Bibert, the brother of former UFC fighter Albert Tumenov, is not just getting by on his name. He is a top featherweight prospect in the sport who is an absolute finishing machine.

Bibert, like his brother, is a terrifying striker with excellent technique and brute power. His knockouts are scary. When he fights on the feet, he does serious damage. He went 3-0 in 2020, with wins over Kyle Reyes, Alexander Matmuratov and Alexey Pulpudnikov. The knockout of Pulpudnikov was especially vicious, with Bibert landing an impressive combo that put his favored opponent to sleep.

Bibert should be a lock for the UFC based on both his name and style. His current four-fight winning streak has been impressive, to say the least, as he has beaten some very credible opposition. He would add some depth to an already solid division.