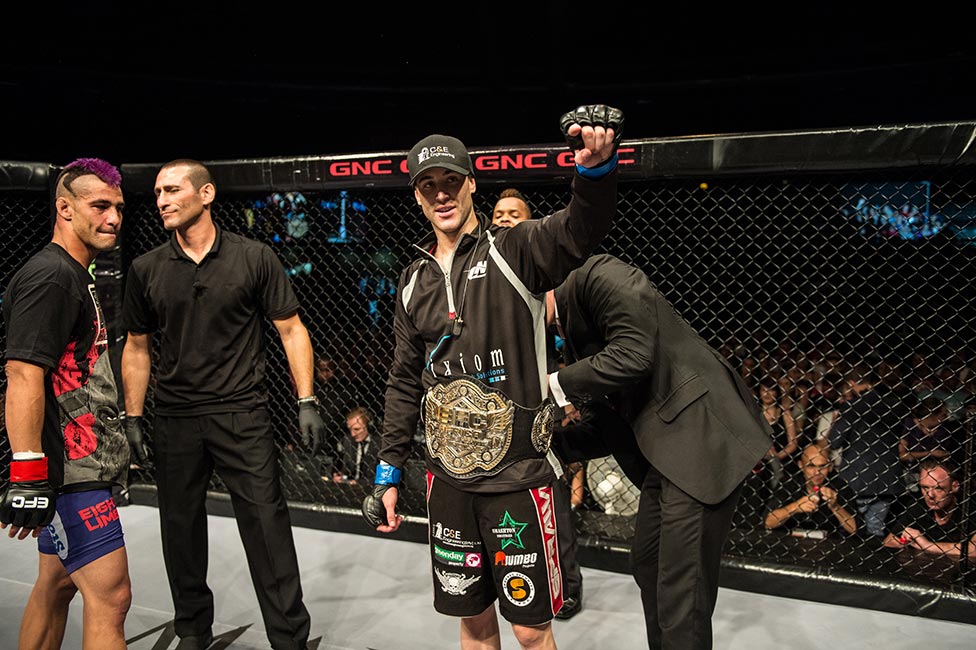 Veterans Daniel Pineda and Jonny Carson take top billing at Legacy Fighting Championship’s 41st offering, but it’s the co-headliner that features the card’s biggest prospects. Those prospects are bantamweights Ricardo Ramos and Justin Rader. Both men are still in the early stages of their careers, but they boast spotless records and seek to extend those marks when they meet on Friday night.

Ramos is the more experienced of the pair, but he’s also extremely young. A three-year veteran of the sport, the 19-year-old made his pro debut in 2012 when he was still just 16 years old. “Carcacinha” has established himself on the regional Brazilian circuit, where he has picked up notable wins over fellow prospects Allan Nascimento, Rafael Matias Correa and Fabio Lima. The Black Sheep MMA product has recorded four submission finishes and one TKO stoppage. He has stopped four of his opponents in the first round.

Rader is an accomplished grappler who has a 2013 ADCC bronze medal and two World championship gold medals in his crowded trophy case. The Oklahoma-based fighter is a Brazilian Jiu-Jitsu black belt who teaches at Lovato’s School of BJJ/MMA. The grappling star only recently transitioned to MMA. He made his pro debut in January 2014 and picked up three victories in his first year of competition. Rader has tallied two first-round submission wins and a second-round knockout.

This boils down to a battle of two prospects who grew up in the combat sports. Rader has been wrestling since age four and training in jiu-jitsu since age 12, and Ramos started literally living in the gym in his mid-teens and is still a teenager. The scrambles on the mat should produce some high-level stuff, and both fighters have flashed some power in their hands to accompany their ground skills.

Ramos may have twice the experience in professional MMA combat, but Rader actually figures to be the more seasoned competitor overall. Rader has encountered the world’s elite on the jiu-jitsu mats, and he’ll only be aided further by his wrestling chops. Ramos is a great prospect, but he’s likely to face his first setback in this affair. He’s young and he’s fighting outside of Brazil for the first time, and his fight is against one of the best grapplers in the world. Rader, meanwhile, is already a Legacy veteran and he’s used to the big stage.

Ramos will put up a good fight, but Rader should be able to close the distance, score the takedown and work his top game. Ramos isn’t ready to face the elite jiu-jitsu game that Rader brings to the cage. This contest should provide plenty of fun for the grappling fans out there, and it’ll eventually come to an end with Rader locking in the submission for the victory.

South Africa’s Extreme Fighting Championship returns with its 38th event. The lineup features a championship tilt in which Boyd Allen puts his featherweight belt on the line against Wesley Hawkey.

Fight Fit Militia’s Allen started his pro career in 2011 and got out to a rocky 3-2 start. He entered EFC Africa in 2012 and established a more consistent trend of victories. Since debuting with the South African promotion, Allen has gone 8-0-1 and captured featherweight gold. Allen’s strength lies in his ground game, which has accounted for nine submission wins and contributed to two decision victories.

The prospect of fighting Allen has to be giving Hawkey nightmares. The 28-year-old challenger has five losses on his 16-fight resume, and all of those losses came via submission. “The Young Assassin” has met Allen once before — the result was a first-round submission loss for Hawkey — and has also suffered a submission defeat at the hands of EFC star Demarte Pena. Hawkey, who made his pro debut in 2010, is a balanced fighter who has scored two wins by some form of knockout and five by way of submission. He earned this title shot with a recent three-fight winning streak.

There’s little reason to expect this fight to produce a different result than their first meeting. Allen is an aggressive grappler with the strength and skills to finish opponents. He’s fighting a challenger who has a very obvious hole in his submission defense.

Allen is fond of chokes. Hawkey often finds himself on the receiving end of chokes. That’s the perfect equation for another submission win for Allen.

World Warriors Fighting Championship is set to return with the third event in its Cage Encounter series. The card contains a number of prospects from Ukraine and the surrounding region. One of these prospects, Khasan Askhabov, will vie for the promotion’s vacant lightweight crown when he clashes with Damien Lapilus in one of the event’s featured bouts.

Askhabov would be undefeated had it not been for Lapilus. The pair met in December at the WWFC’s last Cage Encounter show, and Askhabov was handed a disqualification loss for an illegal knee. It’s the only blemish on an otherwise perfect record for the “Black Wolf.” The 20-year-old is a ground specialist who has recorded seven submission finishes and one TKO victory. He has only been out of the first round in three fights since turning pro in 2013.

Lapilus is a French journeyman fighter who has competed for Cage, Cage Warriors and 100% Fight since debuting in 2011. The 26-year-old trains at Crossfight. He has scored five submission wins, but he has also suffered two submission losses. Damien is the older brother of Taylor Lapilus, a featherweight who signed with the UFC in 2014 and makes his Octagon debut at UFC Fight Night 64.

These two fighters engaged in a complete war in their first meeting, which came to an early end when Askhabov landed an illegal knee to a downed Lapilus. The French fighter fights much longer than his Russian counterpart, but Askhabov was able to deal out a fair amount of punishment and drag Lapilus to the mat at times. Askhabov has to reel in his aggression and not make another careless mistake. Lapilus isn’t known for his knockout power, and his inability to score the finish on the feet could cost him.

Expect another slugfest, but with a clear winner. Askhabov’s ability to bring Lapilus to the mat will benefit him. The Russian will stand toe-to-toe with the Frenchman, but it will be the takedowns and ground game of Askhabov that account for his victory, either via a late submission or the judges’ nod.