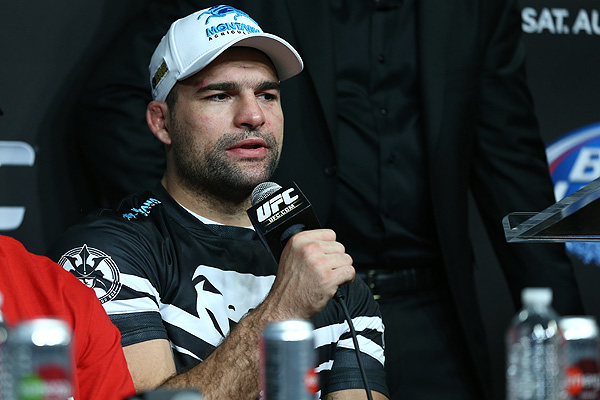 The battle between Mauricio “Shogun” Rua and Antonio Rogerio Nogueira at Pride Critical Countdown 2005 is one of the greatest of all time. In one corner, we had Shogun, the promising 23-year-old up-and-comer from the Chute Boxe camp who was considered a future world champion and the eventual successor to teammate Wanderlei Silva as the scariest fighter in the sport. In the other, Rogerio, the lesser known of the legendary Nogueira brothers, who was primed to be the toughest test of Rua’s young career. With a spot in the final four of the 2005 Grand Prix tournament on the line, the bout was the favorite to steal the show, even with huge names like Mirko “Cro Cop” Filipovic and the aforementioned Silva competing on the card. The fight delivered from the opening bell .

From there, fight fans witnessed one of the most entertaining three-round affairs in MMA history. In a bizarre turn of events, Shogun, who was supposed to have a distinct striking advantage, found himself in trouble early due to a vicious right hook from Nogueira. Rua was able to get the fight to the floor, where he took the advantage despite the fact that Rogerio was the superior grappler on paper. The role reversal ended up allowing fans to see just how well rounded the fighters were right off the bat, and as both men continued to trade the upper hand in all areas throughout the bout, it became clear that we were headed for a classic. After 20 minutes of exhausting action, Shogun ended up getting the call on the scorecards due to his takedowns and landing the lone knockdown of the fight. However, the bout was one of the closest fights in Pride history and had left fans clamoring for an eventual rematch.

This August, more than 10 years after their original battle in June 2005, Shogun and Nogueira are finally going to meet inside the cage for a second time. Obviously, a decade later, this fight feels a little different. This time there’s no spot in the next round of a tournament on the line. There’s no grand expectation for the winner to vault themselves into title contention and take out Jon Jones. These two are legends of the sport and surefire locks for whenever an actual MMA Hall of Fame comes together, but they’re both on the wrong end of their prime and they are fighting for the sport or a paycheck more than for a title shot. This fight is taking place simply for nostalgic purposes, and fight fans are going to cross their fingers and pray for a scrap as exciting as the first time these two tried to rip each other apart.

Nogueira seems like he should have retired ages ago, but we’ve seen him so infrequently that it sometimes feels like he’s hung up his gloves anyway. He has only fought three times since December 2011, with gaps of at least a year in between each of those fights. “Minotouro” holds a 2-1 record during that stretch, including a surprising win over Rashad Evans in early 2013, but Nogueira’s inactivity made him the forgotten man in the UFC’s 205-pound division even before he was starched in his first fight in almost 18 months last summer. While he’s 2-3 in his last five bouts, that’s a stretch that goes clear back to 2010, and it’s unclear if “Little Nog” was just caught by a surging Anthony “Rumble” Johnson last July or if he’s completely past his prime at this point. His inability to stay healthy over the past five years points to Nogueira’s career being all but over, and another loss would go a long way toward confirming that notion.

Shogun, at age 33, is younger than some of the division’s other top fighters, including Daniel Cormier and the aforementioned Evans. However, Shogun has been in more than his fair share of wars and has a ton of mileage on his body at this point in his career. Unlike Nogueira, Shogun has been fighting quite a bit lately, with less than stellar results. Since dropping the UFC light heavyweight title to Jon Jones in early 2011, Rua is just 3-5. He is 1-4 in his last five fights. Rua has been outstruck on the feet for three rounds by a better striker in Alexander Gustafsson, outworked on the mat and submitted by Chael Sonnen and straight up knocked out in his last two fights against Dan Henderson and Ovince St. Preux. To say that Shogun’s career has gone into decline would be putting it mildly — we could actually say it’s in a free fall at the moment — and even a quick finish in his bout against Nogueira isn’t likely to change that.

Yes, Shogun and Nogueira are far from title contenders at this point. Yes, their placement as the co-main event on a pay-per-view card is a questionable call by the UFC. Regardless, there’s nothing wrong with a little nostalgia now and again, and the UFC is delivering one of the most sought-after rematches in MMA history, even if it comes more than five years too late. In the case of Shogun and Nogueira, fans have seen the writing on the wall for at least a year or two now. It’s obvious the end is growing near for both fighters. This may not have been a fight that absolutely needed to happen before these two decided to hang up their gloves, but a lot of fight fans are glad that the opportunity to see these two go to war once again has presented itself. It may not be the end for either fighter when they compete in August, but getting the chance to relive one of the best battles in MMA history 10 years after the fact is a great way to celebrate these two as they near the finish line.