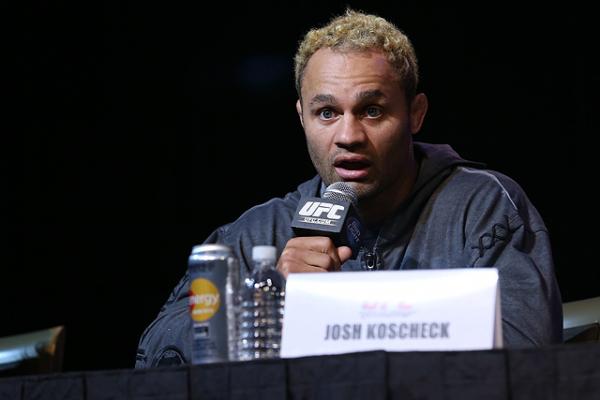 It took Josh Koscheck just over a year to return to the cage to try to break a three-fight losing streak. It took just 10 minutes for reality to set in.

Jake Ellenberger submitted Koscheck at UFC 184 with a vicious choke that had Koscheck literally foaming at the mouth. Now, instead of a comeback win, the 37-year-old Koscheck has fallen even further into a bad slide.

Koscheck has four straight fights against top competition, but he has four straight losses to show for those efforts. First came a split-decision loss to Johny Hendricks. Then there were the stoppage losses — a first-round TKO to Robbie Lawler, a first-round knockout delivered by Tyron Woodley and the aforementioned second-round submission from Ellenberger. Koscheck hasn’t had his hand raised since 2012.

Now, Koscheck has done the valiant thing and stepped up on short notice to face the tough Erick Silva in Silva’s home country of Brazil. The move won’t lead anybody to question the bravado and heart of Koscheck, who almost certainly hits all the boxes on that checklist, but it leads to the question of whether Koscheck should have called it quits after the Ellenberger defeat. Heck, should he have called it a career before then?

It’s a tough question to answer. Nobody likes to call for a fighter to retire. If Koscheck had lost to somebody low on the totem pole, like Mark Munoz did on the same card, the answer to this question would be a little clearer.

The difference between Munoz’s situation and Koscheck’s own scenario is that Munoz is doing something that Koscheck isn’t: he is making the decision to call it quits after his next fight.

Koscheck has been around for quite some time in the UFC. His days with the promotion began when he was added to the cast of the original Ultimate Fighter reality series. He was only a two-fight veteran at the time, but he became a star of the show and made his official UFC debut in 2005 at the TUF 1 Finale, where he knocked out Chris Sanford. Koscheck has had a lot of ups and downs in his 24-fight UFC career. He climbed all the way up the ladder to finally get a title shot in 2010 against then-champion Georges St-Pierre. He fell short against GSP, suffering a severe eye injury while enduring a beating en route to a unanimous decision loss. He bounced back with two wins, but then came his current four-fight losing skid.

Koscheck hasn’t exactly shown much in those last four fights. His skills are certainly on the decline, but who really ever continues or hits their stride at age 37? There’s also the strength of the welterweight division, which Koscheck calls home, to consider.

Silva has also had a sort of up-and-down career after being one of the most highly touted Brazilians when he dispatched Luis Ramos at UFC 134. Since then, Silva has alternated between winning and losing against mid-level talent (save for a couple of fighters like Matt Brown, who are certainly beyond the mid-level tag) in the UFC.

Obviously, Koscheck isn’t going to compete for a title anytime soon. The division is so deep that even getting into the top 10 and beating a top fighter is a hard challenge. Koscheck has nothing left to prove, though, and his long, storied career is taking hit after hit the more he continues. He could be fighting for the pride, the love of the sport or the money, which is fine. However, fans probably aren’t lining up to see another Koscheck fight. His fans would likely rather see Koscheck go out with some dignity, rather than watch as he continues his steep decline.

If Silva wins in March, what is next for Koscheck? Will he even still have a job with the UFC? The company might keep him around simply to prevent him from joining the Bellator roster, but whom would he be left to fight?

It’s a precarious decision to continue to go on, but ultimately it is Koscheck’s decision to make. Maybe someone did tell him after the fight with Ellenberger that his career effectively took a massive blow, but he decided to keep moving. After all, that is what great fighters are made of. They have the will and ability to keep moving forward even after devastating career losses.