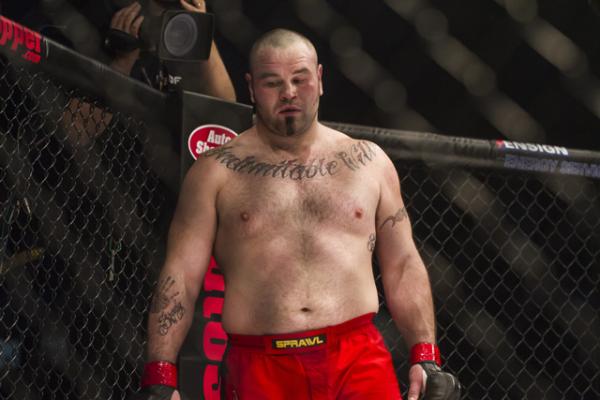 Unified MMA’s 22nd offering might not provide a deep lineup of prospects, but it does have a potential heavyweight up-and-comer headlining the card. That fighter is undefeated Unified MMA heavyweight champion Tanner Boser. Boser will look to make his first defense of the title when he meets UFC veteran Tim Hague.

The 23-year-old Boser is a small heavyweight who has also competed as a light heavyweight. “The Bulldozer” made his pro debut in 2012 and quickly established himself as a finisher with two TKO victories and a submission win through his first three bouts. After going the distance in his fourth fight, Boser tacked on two more stoppages with a submission in his fifth fight and a TKO in his sixth outing. That sixth fight also provided Boser with a piece of championship gold. The Hayabusa Training Centre product finished Jordan Tracey in the third round to claim the vacant title. Boser has a background in karate and achieved the rank of black belt in the discipline by the age of 18.

In 2009, Hague became a rather well-known member of the UFC’s heavyweight division, but for the wrong reasons. He was on the receiving end of a seven-second knockout from Todd Duffee. The defeat came in Hague’s second UFC appearance — he defeated Pat Barry in his Octagon debut — and he went on two lose his next two before receiving his release. After a pair of regional wins, he returned for one more UFC fight, but he fell via TKO to Matt Mitrione and quietly exited the promotion again. The 31-year-old has had an up-and-down career ever since then. He has gone 7-4 through his last 11 fights, but he is riding a three-fight winning streak into this title shot.

Boser’s skills are still developing, but he’s stepping up in competition from a group of fighters with a combined 15-15 mark to fighting a UFC veteran, albeit one who managed just a 1-4 mark in two UFC stints. It could be a tough move for someone who has just a few years of MMA training under his belt and only a couple of years of pro competition. Boser does have two submission wins, but he’s still a striker first and foremost, and that could be a big advantage for him in this fight.

Hague is also a striker — 13 wins by some form of knockout, only four via submission — but he also carries a big question mark about his chin. Hague has been on the receiving end of knockout blows in four fights, and those have all been first-round finishes. If Boser comes out strong and connects, it could be lights out for Hague before he has a chance to mount much of an offense. If, however, things do go into deeper water, Hague’s experience should give him an edge.

Boser does seem like a fighter with some potential, but this will be a learning experience for him. He could certainly take advantage of Hague’s suspect chin and score the early knockout, but Hague’s experience and 19 wins are hard to ignore against such a green prospect. Boser also has to overcome being the much smaller fighter in this affair against a man who has made his last two appearance as a super heavyweight. Hague might suffer an early scare, but he’ll hang in there and turn the tide in the second and third (if it goes that far) rounds. Eventually, the UFC veteran will find the TKO finish and hand Boser his first career loss.

Fresh on the heels of a deal to broadcast BAMMA events in Europe on ESPN Player, ESPN’s living stream service, the British promotion is set to return with its 19th offering. The Lonsdale British lightweight title will be on the line as part of the festivities. Undefeated up-and-comers Jack McGann and Marc Diakiese will vie for the vacant strap.

McGann’s career launched in late 2012 with a 28-second TKO finish of Malcolm Richardson. He has continued his trend of efficiency with an additional six first-round finishes. One troubling statistic is the current combined record of McGann’s opponents, which stands at 11-30. The 21-year-old will face his first true test against Diakiese. McGann’s father, Anthony, founded the Wolfslair gym, and Jack has been training there since age 13 alongside the likes of Michael Bisping, Quinton “Rampage” Jackson and Cheick Kongo. McGann is an accomplished Brazilian Jiu-Jitsu practitioner, but he has relied on his striking game to account for all but one of his victories.

Diakese is another young fighter with a lot of potential. He’s just 22 years old, and he has only been competing professionally since late 2013. The Ludus Magnus fighter got out to a quick start with two first-round TKO victories, but his resume has balanced out over time. He now has a submission and three decision victories to accompany those early career striking wins. Diakese, like McGann, has faced a set of opponents who combine for a current record of 13-48-1, and his most recent victory was a unanimous nod against a foe who was making his pro debut. He trains out of the All Stars gym in Sweden.

There’s a ton of talent and potential in these two warriors, but each has a lot to prove after fighting mostly scrubs thus far in their careers. Diakiese is an aggressive and flashy fighter competing out of an elite camp, but McGann is just as aggressive and grew up around UFC stars. Diakiese has struggled to find the finish in his most recent fights, and that could lead to his downfall in this affair.

McGann is extremely good at putting away opponents early, whereas Diakiese seems satisfied to grind out the win. Yet, Diakiese’s aggressive starts could start costing him in fights against tougher opponents. Meanwhile, we’ve never seen McGann fight two or three rounds, so it’s difficult to assess his cardio.

The consistently quick finisher is the safe bet in this fight. McGann knows how to put away fighters with strikes, but he also has a solid grappling arsenal to utilize if the fight hits the mat. He’ll add to his first-round finishes with a TKO stoppage on a counter as Diakiese comes in to throw something fancy.

Sugar Creek Showdown’s 25th offering is topped by a championship affair between veterans Jeremy Horn and Tony Lopez, but it’s the title tilt between women’s bantamweight champion Anita Rodriguez and challenger Brenda Gonzales that stands out as the most compelling contest on the card.

Rodriguez will set out to make her first defense of the belt she claimed at Sugar Creek Showdown 23 in November. Rodriguez scored a fourth-round TKO over Jade DeHaas in the title bout to move her record above the .500 mark and put gold around her waist. She may have five losses on her 11-fight record, but she has faced an extremely high level of competition throughout her career. She clashed with Leslie Smith while the two were still amateurs in 2008, and she split her first two pro bouts against Jeri Sitzes. “El Tigre” was just 1-4 in her five fights before capturing the SCS title, but the losses included a submission defeat against Tonya Evinger, a TKO loss to Latoya Walker and decision losses to Jessica Eye and Audrey Alvarez. The 29-year-old trains out of Phalanx MMA and has posted three wins by way of submission and one via TKO.

Gonzales, who possesses a 6-2 mark, stands as the bigger prospect in this contest. She has been ranked as a flyweight, but continues to bounce between the 125- and 135-pound divisions. “Boom Boom” debuted in 2011 and streaked out to four straight wins under the King of the Cage banner. Her first loss came when she traveled to Japan and fought Rin Nakai at Pancrase 247. The FIT NHB product bounced back by returning stateside to defeat Heather Bassett at RFA 18. She faced another setback when she dropped a five-round verdict to Colleen Schneider. Shifting back to flyweight for her most recent fight, Gonzales decisioned Lacey Schuckman. She has a boxing background and has notched three wins by some form of knockout.

If her record is any indication, Gonzales might want to consider a permanent move to flyweight. The New Mexico-based fighter enjoyed a title reign within the division during her stay in King of the Cage. The results of her previous run at 135 pounds only help to cement this argument. She went 1-2 at bantamweight before sliding back down in weight to pick up the win over Schuckman. Gonzales might be a prospect, but she will struggle to hold onto that tag and convert it into bigger things if she’s fighting in the heavier of the two divisions.

Rodriguez isn’t exactly the most consistent fighter, though, which makes this an appealing match-up for Gonzales. The Dallas-based champion keeps fights close, but she usually comes out on the wrong end in fights against noteworthy foes. The one strength in Rodriguez’s arsenal is her ability on the ground, where Gonzales is most vulnerable. The 33-year-old challenger suffered her only losses to a pair of strong grapplers in Nakai and Schneider. The question is whether Rodriguez falls into the same realm of strong ground specialists. If she can’t get Gonzales to the mat and keep her there, then Rodriguez is going to fall back to the .500 mark.

Gonzales suffered her only stoppage loss to Nakai, a far better grappler than Rodriguez. Even Schneider had to settle for a decision. Rodriguez isn’t going to be able to find the finish, and she’ll struggle to consistently land her takedowns. Gonzales will use her superior stand-up skills to outpoint her adversary and take home the judges’ nod, plus the SCS women’s bantamweight belt.