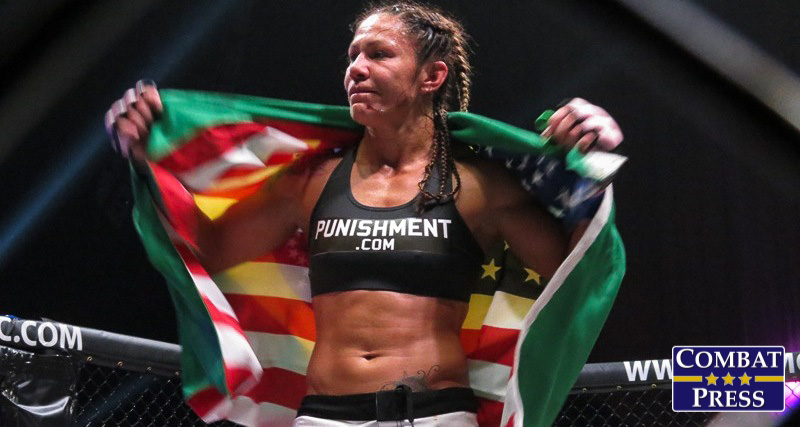 The event was headlined by the promotion’s featherweight champion Cristiane “Cyborg” Justino. The Brazilian looked to defend her 145-pound title against Canada’s Charmaine Tweet.

Justino had not competed in MMA since July of 2013 when she defeated Marloes Coenen via fourth-round TKO at Invicta FC 6. However, she had appeared in the kickboxing ring during that span, making two appearances under the Lion Fight Banner. Justino was originally expected to headline Invicta FC 10 in December, but was forced out after suffering a full thickness rupture of the anterior talofibular ligament in her left ankle.

Tweet entered the title affair having won five of her last six fights. The 37-year-old had bounced between the featherweight and lightweight divisions throughout her career, most recently competing in the first 155-pound fight in Invicta history. In that fight at Invicta FC 8, Tweet stopped Veronica Rothenhausler via first-round TKO. All six of Tweet’s career victories have come inside the first round, including five by submission.

Also on the card was another undefeated fighter in DeAnna Bennett. The former flyweight made her strawweight debut against the returning Norma Rueda Center.

Reigning featherweight champion Cristiane “Cyborg” Justino needed just 46 seconds to dispatch of challenger Charmaine Tweet. Cyborg connected with a massive left hook that sent Tweet crashing to the mat. Cyborg dropped heavy shots from the top that bloodied the face of Tweet. When Tweet tried to stand, Cyborg landed another heavy shot and Herb Dean stepped in to halt it.

Mexico’s Alexa Grasso and Japan’s Mizuki Inoue stole the show in the night’s co-main event. Grasso put together beautiful combinations on the feet, bloodying the nose of Inoue in round one. Grasso added kicks at the end of her flurries, turning the lead leg of Inoue red. Inoue shot for a takedown, but Grasso attacked with an inverted triangle-kimura. Down two rounds, Inoue went for a finish in round three, putting Grasso on her back and landing heavy shots. In the end, it wasn’t enough, as Grasso earned the decision win.

DeAnna Bennett remained undefeated, earning a decision win over Norma Rueda Center in her strawweight debut. Bennett used combinations well in the opening round to keep Center guessing. The pace slowed in the second round, as Bennett pinned Center against the fence and worked from the clinch. Center came out aggressive in the final round, but her efforts were in vain, as Bennett took the decision win.

Mexican bantamweight Irene Aldana picked up her second straight, first-round finish by rear-naked choke, submitting veteran Colleen Schneider in just 65 seconds. Aldana capitalized when Schneider tripped and immediately went for the kill. She took the back of Schneider and coerced the tap.

Jamie Moyle wasted little time putting her stamp on the evening, choking opponent J.J. Aldrich unconscious with a first-round rear-naked choke. Aldrich scored with her hands early, but when she threw a kick, it allowed Moyle to catch it and bring the fight to the ground. Once there, she took Aldrich’s back and secured the fight-finishing choke.

Strawweights Amy Montenegro and Brianna Van Buren battled hard for three rounds, with Montenegro emerging with a unanimous decision win. The first round was very close, as both fighters were able to earn dominant positions. However, in the last two rounds, Montenegro’s control from the clinch was the difference, as she was able to pin Van Buren against the cage and score with knees.

Christine Stanley put on a strong performance in her Invicta debut, stopping late-notice opponent Laura Salazar in the first round. Stanley rocked Salazar with a pair of right hands early, but Salazar was able to survive and get a takedown. Stanley buckled Salazar with a knee as the pair returned to standing and followed a barrage of elbows that led Mike Beltran to half the contest.

In a battle of debuting flyweights, Aspen Ladd was unfazed by the grappling credentials of her opponent, Ana Carolina Vidal, and earned a dominant TKO win. Vidal took the fight to the ground early, but Ladd reversed the position and delivered heavy shots from the top. He punches took their toll as the referee was forced to intervene before the first round came to an end.