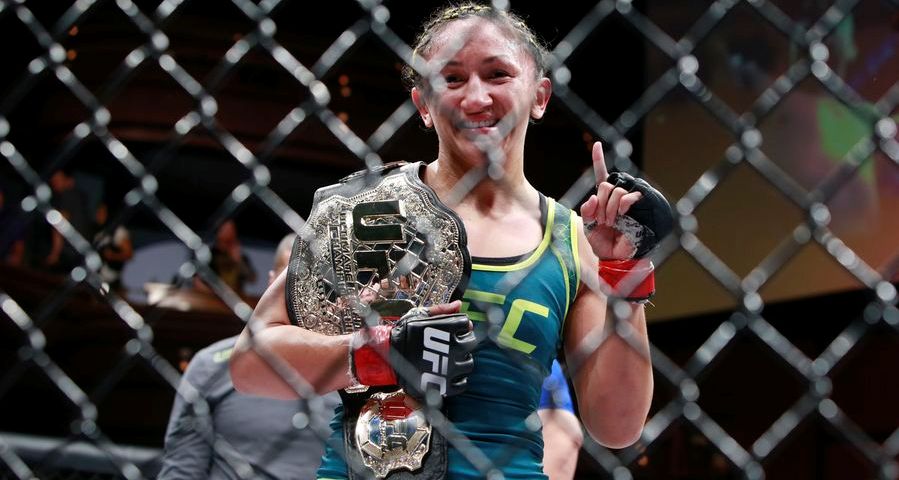 That is a lot of pressure, to say the least. She had the most to lose by participating in the reality show and in the build-up before her first fight against skilled striker Angela Hill, she looked anxious.

After all, she hadn’t fought since Jan. 5, 2013 against fellow TUF contestant “Rowdy” Bec Rawlings. After that fight, Esparza battled a knee injury which forced her to withdraw from her first title defense against Ayaka Hamasaki in July of 2013. Once Esparza was healed, she was set to face Claudia Gadelha in December of 2013, but Gadelha withdrew the day of the fight due to a bacterial infection.

The week before her first fight in the house we were shown a clip of Esparza — she was visibly nervous, voicing doubt about how she would do. Her detractors on social media saw it as a sign on weakness; those who thought they could interpret the editor’s direction saw it as a reason to believe we would see yet another upset. But those pre-fight jitters turned out to be unfounded as Hill was just another fighter who succumbed to the superior grappling skills of the wrestler Esparza.

Esparza was able to score her first win in almost two years by submission in the first round. In the quarterfinals, she soundly defeated Tecia Torres (who many thought could come away with the upset) and was able to out-strike her friend Jessica Penne in the semifinals. This set up the TUF 20 Finale — a highly anticipated bout against “Thug” Rose Namajunas — in her only sanctioned fight in 2014.

Every time it looked like Namajunas might put together a flurry of strikes, Esparza was ready with a takedown. At no point during the fight did it look like Esparza was in danger from one of the most dangerous strawweights in the world. In fact, at no time during the competition did she look like she was in danger.

Esparza came into the competition with the weight of the world on her shoulders and she proved strong enough to carry it the entire year. Fighting through the pressure, expectations and lack of activity may have been more formidable than any of the top-ranked foes she faced and this is why she is Combat Press’s Female Fighter of 2014. Esparza will go down in history as the UFC’s first 115-pound champion and one of the toughest — both mentally and physically — fighters to ever win the belt.