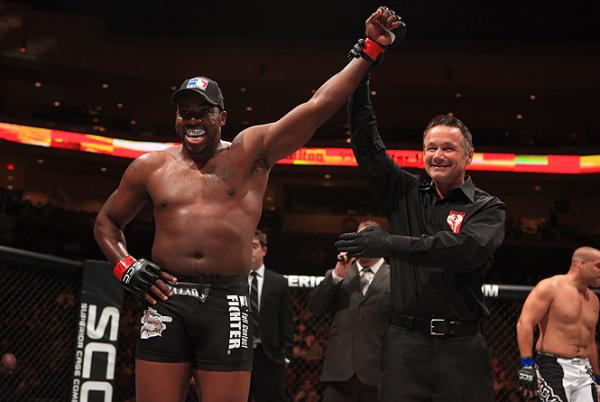 Walt Harris is getting another shot in the UFC.

With Daniel Omielanczuk forced out of UFC Fight Night 55 due to a broken thumb, Combat Press has confirmed with sources close to the situation that Harris will step in against Soa Palelei on Nov 8. in Sydney, Australia.

Harris was cut by the UFC earlier in 2014 following back-to-back losses at the hands of Jared Rosholt and Nikita Krylov. Prior to his first UFC stint, Harris had been riding a five-fight winning-streak. Harris got back in the win column in May, scoring a first-round knockout of D.J. Linderman at Titan Fighting Championships 28. The 31-year-old Harris was expected to face fellow UFC veteran Dave Herman at Titan FC 32 in November, but will now return to the Octagon.

Palelei, meanwhile, is coming off his first loss since 2010. The decision loss to the aforementioned Rosholt derailed an 11-fight winning-streak that included 11 stoppages. The 36-year-0ld Australian has stopped 17 of his 21 career wins via strikes.

UFC Fight Night 55 takes place from the Allphones Arena in Sydney. The night’s main event features a middleweight clash between former Strikeforce title holder Luke Rockhold and Ultimate Fighter winner Michael Bisping. In the co-main event, another TUF winner, Ross Pearson, will square off with Al Iaquinta in a lightweight affair. The entire card is set to air via the UFC’s digital service, UFC Fight Pass.