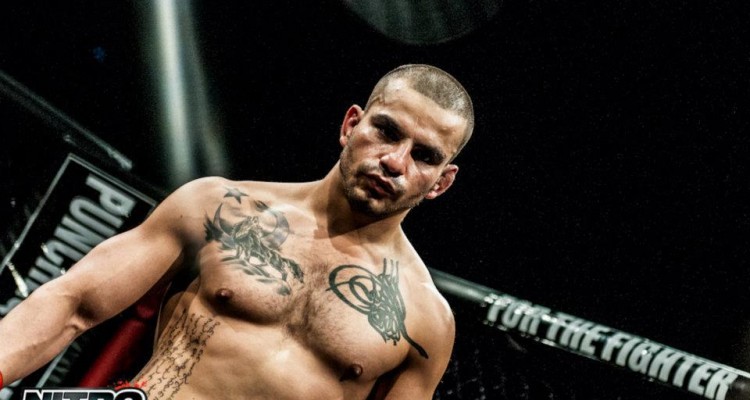 Nitro MMA’s Gokhan Turkyilmaz: Back to Work, But Life as a Fighter Continues

A seasoned traveler knows that feeling inside an airport when commuters are frantically peering up at screens to check their departures times and passengers are helplessly sprinting through the terminal in an attempt to board a plane that’s already making its way toward the runway. The vast majority of us hate traveling. Let’s face it, it’s a stressful time.

Gokhan Turkyilmaz has been there before. In so many different airports, he’s seen it all. Picking up that one suitcase and leaving everything behind to continue a life of development, that’s the dream for any fighter. Sometimes, though, the dream comes to an end. That’s when a life that is dedicated to being in the workforce comes creeping back.

“It’s something you’ve gotta do,” Turkyilmaz explained to Combat Press. “You can’t really make money off fighting in Australia unless you’re full-time in the UFC and you have big sponsors. Australian MMA is still developing, and you need a job so that you can put food on the table, especially if you have a family. When I didn’t have a family, I was happy living out of a suitcase [laughs], but, yeah, I’m happy and that’s the main thing. And my head is in the right place, and that is the priority for me.

“My partner plays a big role in my fight camps. She puts up with me, but at the same time I met her on my journey with fighting and traveling the world. And we ended up back in Brisbane and it was a great experience. It has grounded me and put my priority on family first and then the fighting after. Coming back here and settling in and getting back into my old job as an aircraft engineer, it’s kind of like going back to my old roots. I’m back at Integrated [MMA] now, and I’ve traveled everywhere and Integrated has always been a top gym.”

With his travels taking him to so many different parts of the globe to experience mixed martial arts, Turkyilmaz has seen a lot when it comes to the sport. With each new city and gym that he has walked into over the past few years, something always seems to dawn on him.

“With Australian MMA, we’re a bit behind the rest of the world,” Turkyilmaz admitted. “And I’m not that good myself. There’s so much more talent that’s international and these guys, they live and breath MMA. For me, it started off as a hobby and then, after two years, it turned into a job because I wanted to have that experience as a fighter. I’m nowhere near the level of the UFC and such because I’m still growing as a fighter and still working on my faults. And I’ve got plenty of room to grow, and that’s what I wanna do. I’ve had 26 fights, and I’m still gonna keep learning and learning and keep fighting. For me, the outcome isn’t the most important thing. I mean, winning is always everyone’s objective, but getting in there and getting the job done and proving how much hard work pays off, that’s just as important.”

Turkyilmaz’s next bout comes on Oct. 11 at Nitro 12 in Brisbane, Australia. He fights in the main event for the promotion’s lightweight title against Isaac Tisdell. Turkyilmaz has spent his four and a half years as a professional fighting for just about every major Australian promotion. From early on in his career, he had his sights set on winning the Nitro lightweight belt.

“I think that it’s Australia’s No. 1 show,” Turkyilmaz exclaimed. “It has been around for a while now, and they’ve always been professional and always looked after me and my team. I’ve been fighting on Nitro since 2011. It’s been three years in the works, and this is the ultimate goal and a milestone. It’s gonna be a big achievement.

“[The belt] is the goal. That’s been the goal for the last two years, and just getting that opportunity—I’m lucky enough to get that, and it’s not just luck, it’s all the hard work that I’ve put in, and everything has come from that.”

Tisdell, who is coming into the fight on a three-fight winning streak, is no easy opponent for any fighter. Turkyilmaz has experience on his side, though, with over three times as many fights as his foe. Fight experience is one of those things that you can’t truly learn in the gym.

“I don’t think he’s been tested,” Turkyilmaz said. “He’s fought some good guys with good records and things like that, but nobody with as much tenacity. And my experience is certainly going to play in my favor. But he’s pretty tricky, and it’s hard to catch someone when you don’t know what they’re gonna throw at you. I trained with Isaac in Thailand for about six months and we kinda know each other in a way. We’re close mates and we hung out with each other and trained with each other, so it’s gonna be a fun fight.”

Receiving a potential match-up against a friend or former training partner often raises that age-old question for a fighter: Is it personal or is it business? Many fighters, even in the big leagues of the UFC, will never take a fight against a friend. For Turkyilmaz, though, the question prompts a very easy answer.

“It’s not really that bad,” Turkyilmaz confessed. “You know the cliché, as they say, ‘business is business’ inside the cage, and it’s only 15 minutes. Afterwards, for me, I think it’s a bit more fun. Your nerves aren’t as bad, and it seems to play a part in camaraderie as well as sportsmanship.”

The Oct. 11 bout will be a pleasant change for Turkyilmaz. After settling down in Brisbane, it’s once again about fighting at home. Fighting abroad is fun and certainly leads to exposure, but there is no better feeling than trading leather while friends, family and everybody in between watches from the stands.

“It’s always good to be able to do a full camp [at Integrated]. We’re always learning and we’re always getting new people in. We’ve got tough guys that are veterans, and beginners and up-and-coming fighters as well. It’s also good to have people at my weight training with me, too.”

Turkyilmaz is no stranger to setbacks inside the cage. However, it has been over three years since he has posted back-to-back losses on his record. With so much at stake in this fight, it begs the question: What happens next?

“This is gonna make or break me, this fight,” Turkyilmaz revealed. “I’m still gonna continue fighting regardless of the outcome, but when I win, I’m gonna have a few months off [be]cause I’ve been so active over the past two years and haven’t really had much rest. But this is probably one of my most important fights. Everything lies on this and I’ve put everything into the fight and this camp.”