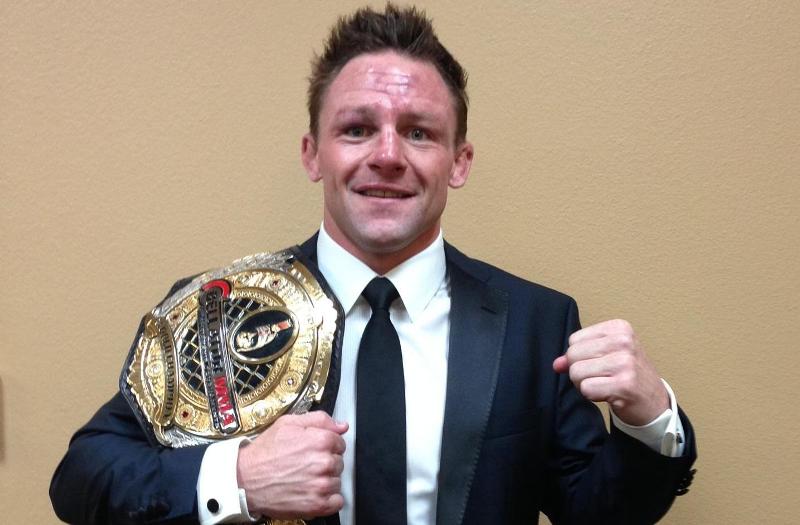 The ever-genial Warren was wearing a charcoal black suit and was surrounded by his wife and team, who were all relieved and ready to celebrate the win. It was only a short time after he’d left the cage and he was still feeling the dazing effects from a full 25 minutes of fighting. The damage to his face was obvious. For a moment, tears were ready to jump out from behind his eyes. He fought to hold them back as he talked about accomplishing another major life goal.

“I got a lot of my friends here and family members, so it’s vindicating, you know?” Warren told Combat Press. “I feel like I’ve accomplished another goal. Come on, two-weight-class champ in Bellator? That’s about as tough as you get!

“It’s a goal-achieving moment. A lot of people set goals, and it’s really hard to achieve them. It changes who you are as a person when you achieve the goal; you know that you can do it the next time. The support cast I have is ridiculous behind me. In that corner, my wife, my friends, Damian Logan and Apex Wrestling—I’ve got a lot of help behind me pushing me.”

The title fight with Dantas was no easy win. It was a gritty five-round affair. Warren even described it as one of his “toughest” professional fights ever.

The two men were scheduled to meet previously at Bellator 118, but Dantas was forced to withdraw with an injury. This gave each fighter plenty of time to build up their eventual clash.

“I don’t think he was ducking me,” Warren said of Dantas. “He’s a young kid and had some problems, and he showed up tonight and I’m happy he did. He showed up and we both threw everything we had at each other, and I’m proud that I came out on top.”

Now that their battle has concluded, Warren is willing to show his respect for Dantas. The story was different prior to their fight, however. Warren poured on the trash talk, hoping to get inside his opponent’s head.

“I think he was pretty mature about that,” Warren said. “He took it and didn’t let it bother him. I feel like he came with everything he had and he put on a great show for everybody.”

Even though Warren was the victor, he was wearing a considerable amount of damage he received from Dantas over the course of five rounds. Warren has a strong poker face to the effects of the hard shots he takes inside of the cage, but he agreed that Dantas’ punches were hitting their mark.

“Bottom line is he’s a great striker,” Warren admitted. “Those landed on me, I’m not going to lie. They hit me hard and dazed me, and I just stayed focus. I believe my conditioning, the way I was prepared, was able to push me through this fight.”

“Yeah, I’m not proud of it though,” Warren laughed about his ability to take hard shots. “I was trying to stay safe, but it’s hard to stay safe in a championship fight.”

“The Baddest Man on the Planet” is a champion in a new era of the Bellator brand. Former president Bjorn Rebney is out and Scott Coker is in. Along with the new leadership comes various changes to how Bellator will be operated. Most notable among those changes is the shift away from the tournament format and a clearly defined set of title challengers awaiting a champion.

“I’ve heard the same things you guys have,” Warren said of the changes to Bellator. “I’ve been focused on this fight and getting it done. I’m in the situation of fighting for belts; I’m not in the situation of tournaments. That’s the toughest thing about Bellator is coming through that tournament—three fights in three months. I’m not a young kid. That takes a lot out of a man. So now that that’s getting away, we’re going to see a little bit bigger fights and exciting fights.

“I don’t really know who my next opponent is. I’ve waited for about a year to fight Dantas, so it’s exciting to get the win. I’ve been waiting to fight him. You know Bellator has something up their sleeve. I’m sure I’m going to be fighting some nasty guy again, probably some nasty Brazilian again [laughs].”

Warren really doesn’t express much concern about who comes next. He doesn’t have anyone particular in mind. The gold is around his waist, and he plans to keep it there.

“No, I don’t need to call anyone out,” Warren stated. “I’m the champ. If someone wants to fight me, then they’ve got to get the balls to step up to the table and get it done.”

Even though he had to earn his way to each of his title wins through the tournament format—a journey stretching back to Bellator’s season-two featherweight tournament in 2010 and the recent season-nine bantamweight tournament—he is taking it in stride that the next person he faces might never have had to fight the same grueling schedule Bellator’s tournaments demanded.

“That’s progression,” Warren explained. “Our company’s getting bigger and we’re growing and you move forward with the times, and that’s what we’re doing. It’s a progression sport, and if you don’t move forward with it, you’re going to get left behind. That’s what’s happening with Bellator; it’s moving forward every single year.

In terms of his career, the 37-year-old is content to embrace the happiness of achieving a major goal for himself in being a newly crowned champion. That sort of thing requires a good deal of attention, of course. But fight fans have also known Warren as a television personality on the likes of Fight Master. Warren isn’t laying his reality-show career to rest just yet. He is in talks about a possible appearance on another Spike TV show, but nothing is officially on the horizon that is as important for him as maintaining his championship status.

In a moment of brevity between all of the many bodies present and the commotion going on with the Bellator staff and the champ and his crew, Warren brought it to his handler’s attention that he still had the same interim belt that he entered the arena with, rather than the proper championship belt that Dantas held.

“I’m hoping my organization gives me a brand new belt,” he jokingly proclaimed.

“That belt is worth more than the apartment I stay in, so stop,” a young woman shot back.

Obviously for Warren and his team, it was a great night after a tough fight. He is Bellator’s new bantamweight champion and holding on to the belt will be his priority going forward.

His efforts prove the benefits of setting and achieving high goals for one’s self. In that moment, he was relishing one of the biggest achievements on his list. One would also imagine that the high confidence he maintains for himself also factors into his success.

“You have to put a mindset in your mind before you get into that cage. They lock the doors. One guy’s going to the hospital, one guy’s losing—just make sure you’re not that guy. Try to go first.”

Warren gladly and politely finished his post-fight duties, but he and his group were ready to celebrate together. He never tried to take all the glory for his accomplishments, though. He made it clear that his support group was an important factor in the achievement. Whatever might come next, he proves that a champion achieves their goals and keeps the right people around to push themselves forward.

“Shit, I’m looking to win some more world championships, maybe an Olympic championship, you never know, you know? We have high hopes for the ‘Baddest Man,’” Warren mused.

“First things first, we have to get this belt done. Mark Montoya at Factory X, they brought me to where I am now. Bob Forster at Phase IV has got my conditioning exactly where I want it. Apex Wrestling…it’s just the combination of support I have behind me keeps pushing me.”