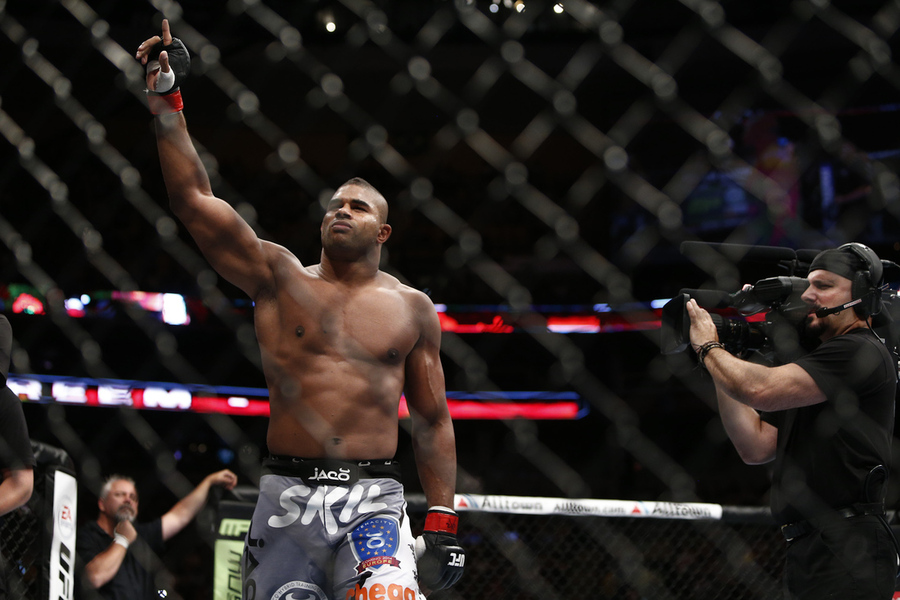 The Chopping Block: Staying in the UFC Is About More than Wins and Losses

The UFC is the world’s biggest stage when it comes to mixed martial arts these days, and it is a true honor to receive the call to fight inside the illustrious Octagon. Just like any regular day job, a fighter has to perform well to keep employment. The UFC has received flak over the years for some questionable releases, but sometimes it’s the fighters that aren’t released that make a bigger statement. Take, for example, former middleweight contender Francis Carmont and current UFC heavyweight Alistair Overeem.

Carmont entered the UFC and rattled off six consecutive victories, a streak that was unheard of outside of the great Anderson Silva at the time. But, like all fighters, Carmont hit a snag when he took on the dangerous Ronaldo “Jacare” Souza. Carmont finally tasted defeat and dropped his next two bouts against C.B Dollaway and Thales Leites. The fans have seen many a fighter lose three in a row and not receive the axe (Jeremy Stephens, Jamie Varner), so it was safe to assume that a fighter with a 6-3 record surely would get another chance, right?

Wrong. Carmont was cut shortly following his knockout loss to Leites. It’s not surprising because of two aspects: He didn’t put on exciting fights and he wasn’t really a pay-per-view draw. Carmont was not the exciting fighter that the fans want to see. He suffered the same fate as Jon Fitch and Yushin Okami. Okami had actually won three of his last four, but still nonetheless found himself on the chopping block.

But what happens when the fighter is a draw for the fans? Does that mean he or she gets more leniency? Even if that fighter has lost three of their last four fights by knockout?

It would seem that, yes, those fighters do find it easier to maintain their spots on the UFC roster.

For the longest time, Alistair Overeem was considered one of the most dangerous fighters in the game. Overeem spent years in Pride as a light heavyweight and then moved up to heavyweight in 2007. He spent the next few years tearing through his competition and had fans begging for his entrance into the UFC. Finally, in 2011, the beast known as “The Demolition Man” made his UFC debut against another massive heavyweight, Brock Lesnar. It was a fight that was billed as a battle of giants (not to be confused with Tim Sylvia and Gan McGee back at UFC 44). Overeem easily dispatched the former heavyweight champion inside the first round. This earned him a shot at then-champion Junior dos Santos as his next challenge. As we all know now, this fight never came to fruition. Overeem failed his pre-fight drug test and the fight that all fans wanted to see was never granted.

It was all downhill from there.

Overeem was granted clearance to fight again and was put against Antonio “Bigfoot” Silva.  It was very clear that this was a much smaller Overeem. After seemingly winning the first two rounds, Overeem was brutally knocked out in the third frame. It was a result that shocked the world. It would not be the last. Just months later, Overeem was paired up with Travis Browne. Just like before, Overeem was on his way to winning the fight before he took a front kick from Browne that shattered his hopes of another victory.  The unstoppable wrecking machine had started his UFC career off at an unsettling 1-2 record.

Overeem’s next fight was Frank Mir. It was a must-win situation for the Dutchman. Overeem fought a conservative fight and claimed the lackluster victory that he needed. Fans were still clamoring to see the beast that had been feared all those years. In his next fight, Overeem was paired with “Big” Ben Rothwell. It was a fight in which fans and odds-makers alike had him as the clear favorite. But with one barrage of punches, Rothwell silenced the critics and stopped Overeem in the first round. Another knockout loss.

Now, after five fights in the world’s biggest proving ground, Overeem has a meager 2-3 record. It looked as though Overeem would be on his way out. Instead, he has been given another chance against Stefan Struve at UFC on Fox 13 in December. If Overeem is not victorious, is it time for the cut to be made? The UFC executioner sharpens his axe in anticipation.