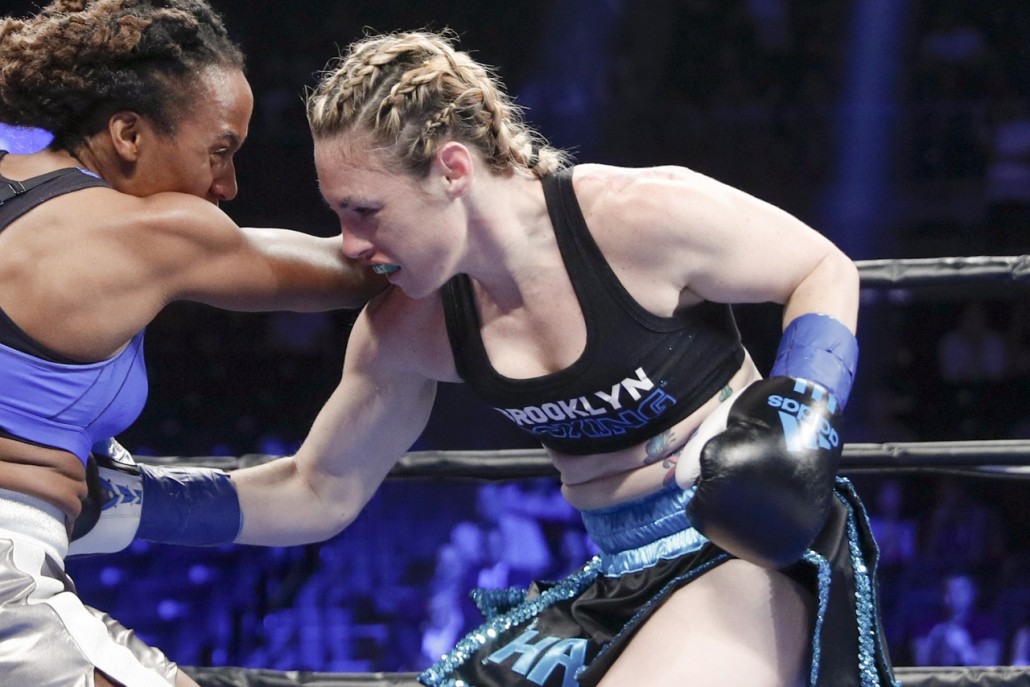 Invicta FC 21’s Heather Hardy: Fighting Through It All

Change is an inevitable part of life. And with it comes adversity. How one handles change and adversity defines who a person is.

No one knows this better than Brooklyn’s Heather Hardy.

The 34-year-old has overcome everything life has thrown her way. From being raped at a young age to raising a teenage daughter as a single parent, Hardy has stood tall and fought her way through life’s challenges. That fighting spirit has led to an undefeated boxing record and multiple world titles.

Yet, despite her success in the boxing ring, Hardy is now turning her attention to MMA. She’s approaching this change with confidence.

“As an amateur, I did kickboxing and Muay Thai. So, ever since I started boxing, everyone asks, ‘Are you gonna do MMA? Are you gonna learn jiu-jitsu?’ I decided to take the boxing route because you can’t just be OK at everything. You have to be great at something. So I always said if I was going to do MMA, it was going to be after I was great at boxing. And I’m great at boxing,” said Hardy with a laugh.

Although Hardy has been focused on the boxing ring for the better part of the last five years, she has managed to incorporate aspects of MMA into her training regimen.

“I used to hang out at Ray Longo’s school. I did some kickboxing with one of the girls who trains up there, so I did some wrestling with Jamie Franco — he was teaching me throws — but I was using it as cross training. Even when I fought Shelly Vincent this summer, I’d go up there and throw people on the floor,” explained Hardy. “Just a little before this fight camp, I started working with Rob Constance at Renzo Gracie on some judo and jiu-jitsu.”

Even with double-digit boxing wins on her resume, Hardy has found MMA training to be quite the challenge. However, like everything else in her life, she’s taken it in stride.

“It is overwhelming. That’s a great word to describe it,” said Hardy. “But good thing I’m a mom, because I’m accustomed to stuff that is way overwhelming.

“It’s completely different from a boxing training camp. I fired my strength-and-conditioning coach because I don’t have time to be lifting weights and shit. I’m lifting people four days a week! Even running, I used to do a sprint day [and] a long run day, just for stamina. But with all the grappling and MMA sparring, I don’t have time for all the other workouts. My training has been 90 percent learning, not just working out.”

With so much to learn, Hardy has experienced a gamut of emotions. What once seemed like just another fight camp has led to Hardy questioning her sanity at times when the cage door shuts.

“In the beginning, people were asking if I was crazy or nervous. But I was like, no, I’m fighting. It’s just a fight,” recalled Hardy.

“[So] when I said I was going to do this fight, I thought to myself that it’s just like the street. Now, I’m getting inside the cage and I’m asking myself, ‘What is wrong with you, Heather Hardy?’”

Hardy might have a light-hearted approach regarding her mental state while training, but make no mistake, she isn’t taking MMA lightly. Her boxing career set one hell of a precedent for the New York fighter, but she believes she can repeat her success in MMA.

“I rushed my boxing career and that turned out all right,” she quipped with a laugh. “I had my first amateur boxing fight within three weeks of first putting on gloves. Within 18 months, I had won every title you could win at 125 pounds as an amateur. This is my third year as a pro boxer and I’m 18-0, undefeated, with a string of accomplishments. Maybe some people are just meant to have a fire under their feet.

“I’m a very focused person. It’s not that I expect to find the same success, but I expect to do the best I can do. I’ve never gotten into a fight and said, ‘I wish I had trained that extra day.’ I never leave it to chance. Anything I can do, I do. So far, it’s worked. We’ll see how MMA turns out.”

Dubbed “The Heat” by her trainers, Hardy used to rely on her heart every time she stepped into the ring. Over time, her skill set began to grow and technique took over. If things don’t go as planned in her MMA debut at Invicta FC 21, she plans to fall back on her experience in the ring and the advice of uncrowned boxing legend Leon “Cat” Taylor.

“At the beginning, I didn’t know shit, so I was just in there surviving. Now I have a lot more fighting sense,” said Hardy. “I’m a pressure fighter. I throw a lot of punches and I don’t get tired. I’ll stay right up in your ass every minute of every round. I bring the heat.

“Leon Taylor used to tell me, ‘Box smart and use your jab, but if that fails, you take that mothefucker to the streets.’ I’m always ready to do some smart boxing, but if I have to, I’m ready to take it to the streets.”

Hardy’s frequent references to the streets shed light on her upbringing, as well as one of the toughest moments of her life. At just 12 years old, she was raped. Fearing repercussions, she largely kept it secret. Now, as one of the world’s elite female combat athletes, Hardy wants to make sure no one has to live through a similar situation.

“In the beginning, I thought there was a fine line between being an advocate and someone who people thought was complaining and crying,” admitted Hardy. “But someone told me once to imagine the girl who didn’t fight through it. It’s still eating her up inside. She’s still afraid.

“To be in a position where I’m a successful female athlete — they think I’m strong, I’m tough, independent — I think it’s important for them to know where I came from and how hard I had to work to get here. Even though these shitty things happened, not only did I survive, but I’m thriving. I use it to fuel me, to do better, to have better, to be better, to make better for my child.”

Hardy’s traumatic experience is hardly the only adversity she’s faced. After graduating with a degree in Forensic Psychology, Hardy became pregnant. Eventually she divorced and began raising her daughter alone. That’s no easy task for a boxing world champion and aspiring MMA fighter.

“Oh my gosh, it’s hard to do anything while raising a daughter. My daughter is almost 13. As much as I love her, she’s a massive pain in the ass,” Hardy joked. “[She] takes all my money, wears all my clothes.

“It’s challenging for any single parent to have a career, especially a fighting career. There’s travel, selling tickets, training, working. Female boxing doesn’t get the same recognition, so we don’t get the same pay the guys do. I may be 18-0, but I’m still working a full-time job, taking my daughter back and forth to school, and trying to train and win my fights.”

With such a full plate, it would be easy for Hardy to fear her upcoming Invicta debut. But having battled through so much in life, she’s relishing the moment.

“I’m not nervous; I’m excited,” said Hardy. “When you’re in the amateurs, you get that whole ‘I can’t believe I’m doing this’ feeling like it’s Christmas Eve. I haven’t gotten that feeling in so long. With pro boxing, I have so many things, but now I’m still learning. It’s a different kind of nerves [and] excitement.

“But I don’t worry about the big stage; I love it. I’d like to thank Shannon [Knapp, Invicta President] for giving me the opportunity. I won’t let anybody down. I’m looking forward to this next part of my life with Invicta.”

If Hardy’s past is any indication, MMA won’t be too much to handle for the Brooklyn native. In fact, she’s likely to continue to help set the bar for women in combat sports. After all, she’s never faced a change or adversity she couldn’t overcome.

[Ed. Note: This interview first appeared on InvictaFC.com and was used with permission.]