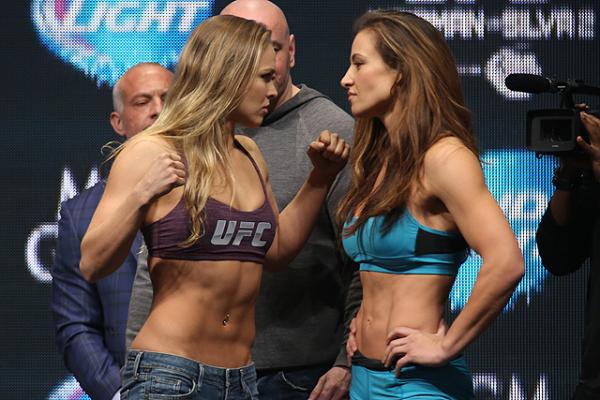 Ronda Rousey vs. Miesha Tate III: The Good, the Bad and the Ugly

Cringe! Not another Ronda Rousey article!

You’re not alone. Everyone is being hit in all different directions regarding Rousey. It’s everything, from her perceived invincibility to people saying they won’t spend money on another Rousey fight because the fight rarely goes past a minute. Google populates Rousey items when one searches “UFC,” and your Twitter timeline is no doubt infested with every opinion you’d ever want to know (or avoid) about the women’s bantamweight champion. If that wasn’t bad enough, now we are coming full circle to Rousey’s first true rival in the cage, as there is chatter going on for yet another Rousey showdown with Miesha Tate in December.

Tate has rattled off four consecutive wins (all by decision) since her last loss to Rousey at UFC 168 and is now back to being the No. 1 contender in the division. This is not a testament to Tate being dominant during her winning streak as much as it is to the women’s division still being in its infancy. Take a look at the current top-10 rankings, for example. Rousey has knocked them all off:

It’s important to lay this all out because fans at first may not understand why Tate is getting a third crack at Rousey when she is already 0-2 against the champ.

Why isn’t Eye getting a shot? Well, she just lost to Tate.

What about Nunes? She beat McMann this past weekend, so she could definitely be in line to fight for a chance at the belt.

Holly Holm? She’s only had two UFC fights and both were less than phenomenal performances. If somebody were to beat Rousey, however, it would be somebody who has the length of Holm to keep Rousey from bull-rushing her in the same manner as the champ has done to each of her other opponents.

This leads us all back to “Cupcake” Tate, the only fighter to not only get Rousey out of the first round but all the way to the third. Is it hard to sell the mainstream on a Rousey fight at this point, especially against somebody who has already lost twice to her? I don’t think so. Rousey has the lore of Mike Tyson during his glory days where people paid money to see if he could ever be beaten, as well as to see how fast he could knock somebody out. We’ve never seen somebody in MMA like Rousey who consistently beats opponents in less than 45 seconds, have we? If so, point me in the right direction.

Ultimately, what does this third fight do for the UFC? Let’s take a look at the good, the bad and the ugly:

The Good
The Bad
The Ugly
What’s the ideal outcome in all of this? If you’re the UFC, you want Rousey to beat Tate convincingly and get Cristiane “Cyborg” Justino to somehow come down to 135 pounds to set up what could very well be the most lucrative fight in the organization’s history. A Tate win over Rousey would be a nightmare for UFC President Dana White and company.
Advertisement